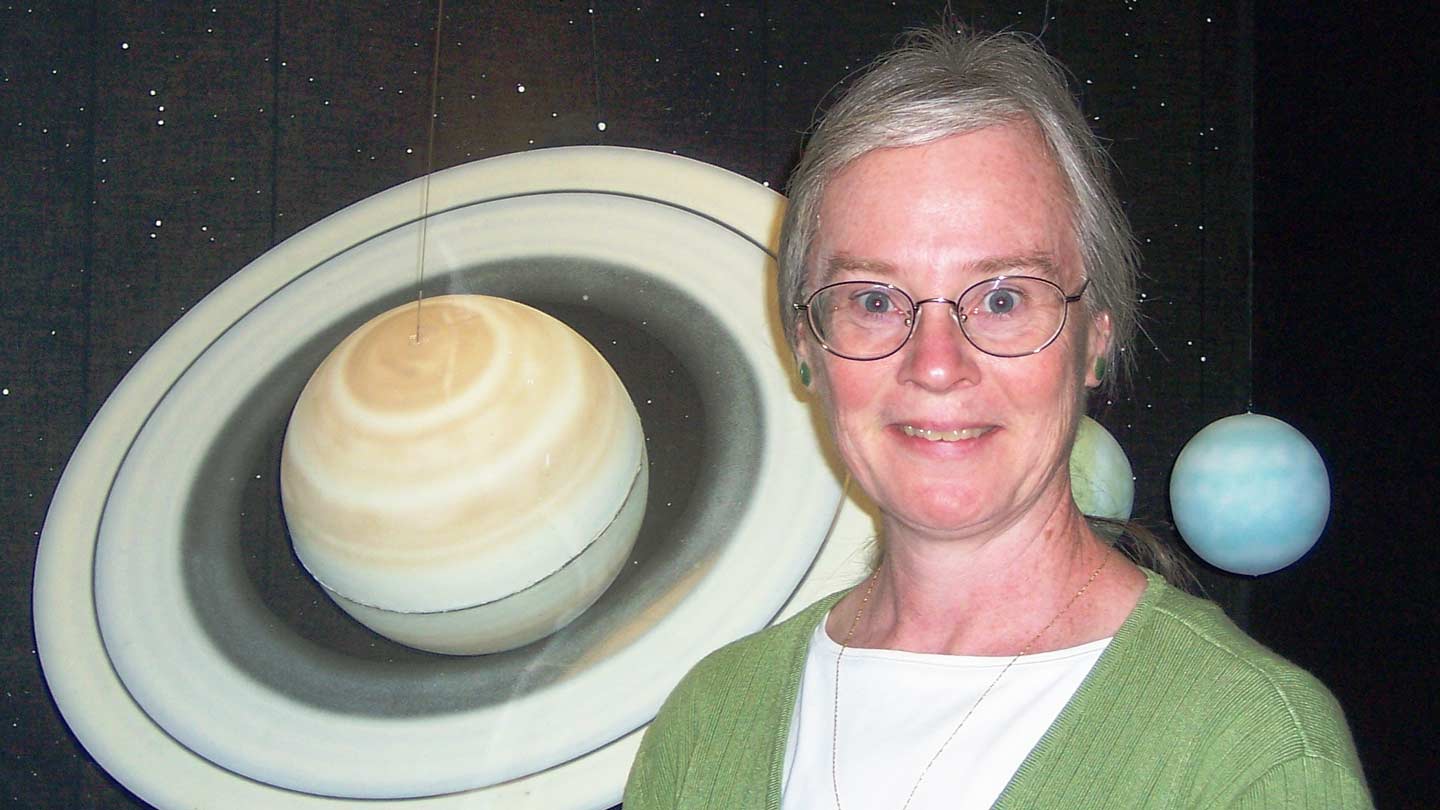 Genevieve "Gena" Crook a mathematics lecturer at The University of Alabama in Huntsville (UAH) has been fascinated by astronomy since she was a young girl.

"My earliest memory of observing the sky was when I was 8 years-old, and a partial solar eclipse was visible over the United States. My cousins and I watched the eclipse through my uncle's welding helmet in our grandmother's back yard."

Crook's love of astronomy has paid off in a big way. She was recently awarded The Astronomical Society of the Pacific's (ASP) Las Cumbres Amateur Outreach Award. The award honors Crook for her outstanding educational outreach to K-12 children through her volunteer work in the Von Braun Astronomical Society (VBAS). She has been teaching and mentoring students in VBAS for 15 years.

"I am very honored to have been chosen to represent VBAS as the 2016 recipient of this award," said Crook. "The Las Cumbres Amateur Astronomy Outreach Award really belongs to all of the Von Braun Astronomical Society. There is a large core group of very dedicated people who are present almost every Saturday night setting up telescopes, making sure the planetarium show runs smoothly, and then staying far into the night to ensure every visitor gets their fill of enjoying the night sky through the telescopes."

My Uncle Bob and all of his family were significant role models for me…from them I learned that science is fascinating, science is for everyone, and a good education is the most valuable gift a child can be given.

Crook credits her love of science to her high school teacher, Mr. W. J. Dalton, and to her uncle, Dr. Robert W. Stanley, a highly respected Professor of Physics at Purdue University. "Mr. Dalton was one of the best teachers I have ever had. He fostered and encouraged my love of mathematics, physics, and astronomy," she said. "My Uncle Bob and all of his family were significant role models for me…from them I learned that science is fascinating, science is for everyone, and a good education is the most valuable gift a child can be given."

Crook bought her first telescope from a fellow student at JSU for $60. "I was very excited to own my own telescope. I took it to a classroom in the JSU science department and the astronomy teacher helped me to accurately align the telescope and get it ready for a trial run. The first thing I looked at in my scope was Saturn."

In 2001, Crook joined the Von Braun Astronomical Society when her youngest child started school. "I hoped at that time I would be able to contribute significantly to the society. I joined because I wanted to be an active part of a group of people who love astronomy, and because I wanted to learn more about astronomy. My passion became the production of engaging presentations for children and the general public in the planetarium/observatory facility operated by VBAS."

She discovered the Night Sky Network (NSN) in February of 2005. NSN is a national network of amateur astronomy clubs sponsored primarily by NASA and the Astronomical Society of the Pacific. Crook immediately submitted the Von Braun Astronomical Society for membership. "The materials provided by NSN were exactly what we needed to establish VBAS as the premier place for families, scout groups, and school groups to get excited about Astronomy."

She has been directly involved in the management and production of over 208 planetarium shows beginning in 2005. "In 2008, I led the effort to begin offering planetarium shows at the VBAS facility for the general public every Saturday night," Crook said. "This outreach effort has been hugely successful due in part to a growing group of VBAS volunteers who set up telescopes for public viewing of the night sky after the weekly programs. The average attendance at a regular Saturday night planetarium show/telescope observing event is now over 50."

Crook presents and writes her own planetarium programs. Her most popular show is African American Astronomers, and Johannes Kepler, Master of the Planets is her favorite presentation. She also finds time to serve as the VBAS's Director of Education and Programs and as a NASA Night Sky Network (NSN) Coordinator. Crook actively promotes and incorporates NSN materials into multiple presentations, including the more than 15 planetarium programs she has written. She has supported numerous VBAS outreach events in the local community such as International Observe the Moon Night at the U.S. Space and Rocket Center, Stargazing at Bridge Street Town Centre, Earth Day at Hayes Nature Preserve, and a campout at the Huntsville Madison County Botanical Garden.

She is registered as an Astronomy Merit Badge Counselor with the Boy Scouts of America, and during the summer of 2012, she inspired young readers to go out and look at the stars by making presentations, on behalf of the VBAS, at eight regional libraries for their summer reading program.

ASP is one of the oldest, most innovative, and respected organizations in the U.S. dedicated to increasing the understanding and teaching of astronomy. Crook will formally receive the Las Cumbres Amateur Astronomy Outreach Award at the ASP Awards Ceremony and Banquet on Oct. 22, in Burlingame, CA.

***EDITOR'S NOTE: Stargazers in the United States will have an opportunity to view a total solar eclipse on Aug. 21, 2017. More information at eclipse.gsfc.nasa.gov.

The VBAS Event Schedule can be found at www.vbas.org.