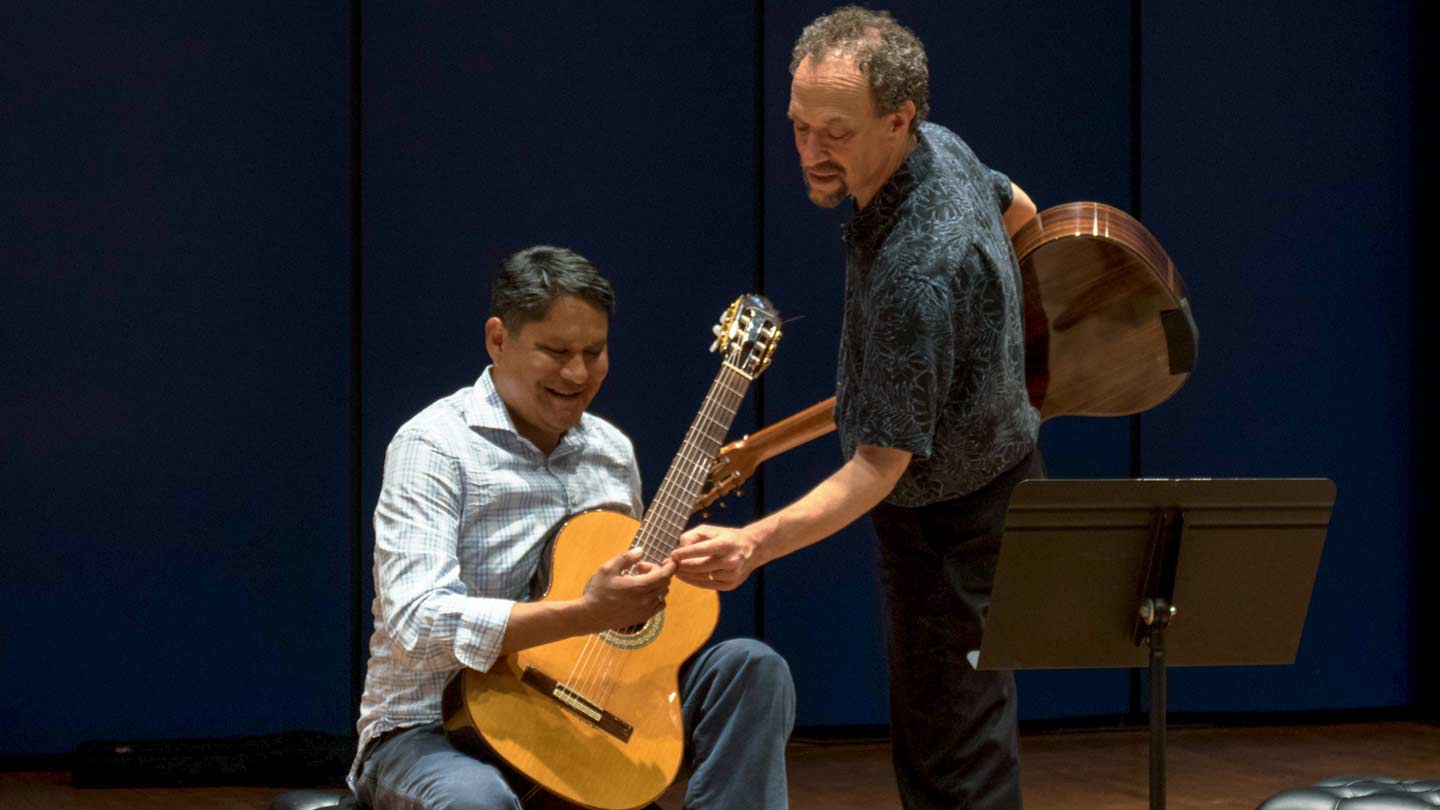 A lot of people spend years struggling to create a successful career in music, but James Manning's skill as a classical guitarist is bound to make the road to being a world-class musician a lot smoother. Manning, a U.S. Navy veteran, attended The University of Alabama in Huntsville (UAH) on a tip from a close family friend, and the G.I. Bill®. He graduates from UAH on Sunday, May 1, with an undergraduate degree in Music.

The ceremony begins at 2 p.m., and will be held in the Von Braun (VBC) Propst Arena. UAH is expected to award more than 800 diplomas at its spring graduation ceremony - 649 bachelor's degrees, 171 master's degrees and 26 doctoral degrees. Alabama U.S. Senator Jeff Sessions will be awarded an Honorary Doctor of Humane Letters degree from UAH during the ceremony.

Manning, who grew up in Madison County (AL) on Monte Sano Mountain, is a full-blooded Native (Navajo) American. After his five-year enlistment in the Navy he began studying architecture at Ventura College (Ventura, CA). "I took beginning vocals classes to help with my open mic performances while knocking out GER'S (general education requirements). I quickly switched to full time music classes after my first couple of performances in the Ventura College Choir."

He credits his singing ability to an obsession with the 1996 Dave Matthews Band hit song "Crash Into Me."

"My main instrument is guitar and I play the piano but not at the level I need to be a Music Theory teacher," Manning said. "I decided to make music my academic major after realizing how much reading music and ear training helped my 'open mic' performances. It's nice when someone comes up to you after a good performance and says 'Thank you'…All I say is 'Thank you,' in return from the bottom of my heart."

Manning joined the Navy right out of high school because attending college at the time was "not an option." His dad a retired Army Sgt. First Class, gave him a not-so-subtle prod by asking him 'what he thought about joining the military.' Manning was stationed with The Naval Mobile Construction Battalion-Five (Seabees) in Port Hueneme, CA. "I did four sea service deployments in Okinawa (Japan), Pearl Harbor (HI), Norfolk (VA), and Guantanamo Bay (Cuba)...Guantanamo was a very tough deployment. The G.I. Bill® is great. However, if I had moved back to Alabama right after my enlistment was over instead of living it up on the beach in California, my benefits would have lasted longer.

"The UAH music program that 'stood out' for me the most was Music Technology with my past experiences of recording music as a hobby," Manning said. "I couldn't have asked for a better Classical Instructor than Phil Weaver. He pushes enough to make sure you come prepared for the next lesson." Manning said Johnna Doty, a Lecturer in Communication Arts is now in charge of the computer programming classes and digital logic classes. "Instructor Doty restructured the Music Technology Program. She designed the classes with a more hands on approach using modern recording programs and equipment," said Manning. "It has grown to be one of the department's most popular music programs since she took over.

"James worked very hard to learn some difficult pieces for his senior recital. There's a tricky passage in the Villa-Lobos: Valsa Chorus, and at the recital he nailed it! He has a deep love of classical guitar and it shows in his playing," said Phillip Weaver, Classical Instructor of Music. "James performed in the master class given by the Los Angeles Guitar Quartet when they were on campus, that meant a lot to him and he did a great job playing for them. It's pretty tough to play guitar in front of world class musicians like that."

In addition to his studies at UAH, Manning was employed as a work study student in the Athletics Department. "This part of my stay at UAH has been a huge highlight. The athletics department treated me like I was an actual staff member and gave me the best job, Shot Clock operator at all UAH home basketball games."

Manning's family includes his mother and two sisters. "My mom still lives on Monte Sano Mountain and I visit her often, one sister lives locally and owns her own hair salon, and another sister lives in Kentucky."

After graduating from UAH Manning plans to pursue a graduate degree in Music Theory at The University of Alabama. "Dr. Burns Taft, my first music theory teacher at Ventura, was an incredible professor. When a teacher makes you want to come to class then I believe they are doing their job. He did. I want to become a music theory teacher and inspire students the way he inspires all his students. I plan to teach near or on the Navajo Reservation in Arizona or New Mexico."