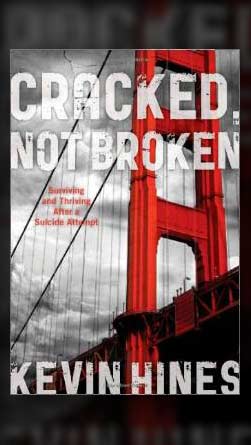 HUNTSVILLE, Ala. (August 20, 2014) - Author and Lifetime Achievement Award honoree Kevin Hines, and the Guardian of the Golden Gate Bridge Kevin Briggs, will be guest presenters at the Cracked Not Broken event sponsored by The University of Alabama in Huntsville (UAH) Counseling Center's HOPE Campaign next month.

Cracked Not Broken , is the title of Hines debut book, and the university's suicide prevention program. The joint presentation begins at 6:30 p.m., on Tuesday, Sept. 9, in the UAH Charger Union Theater. A question and answer session will immediately follow the talk. The event is free and open to the public.

"We're excited to bring Kevin Hines and Kevin Briggs to UAH! The two speakers have powerful stories - one of survival and one of hope. The event is being held in honor of National Suicide Prevention Week and other activities will take place throughout the week," said Sydney K. Harper (MS, CHES) UAH health promotion coordinator.

San Francisco's Golden Gate Bridge is one of the world's top tourist attractions - it is also one of the most frequent places for individuals to attempt suicide. According to a 2013 San Jose Mercury News article, about 1,600 people have jumped from the bridge since it opened in 1937. Another 80 or so people who contemplate suicide are pulled off the bridge every year.

At 19, Kevin Hines attempted suicide by catapulting himself over the railing of the Golden Gate Bridge and falling more than 700 feet. It took him four seconds to fall. Hines had recently been diagnosed with bipolar disorder. The fall nearly broke his entire body. Less than two percent of the people who jump from the bridge survive. Of the few who have, Hines is the only one who has dedicated his life to fight for suicide prevention.

Now 31, Hines holds a Lifetime Achievement Award for his work in suicide prevention. He has been featured in the film The Bridge, his memoir, Cracked…Not Broken: Surviving and Thriving After a Suicide Attempt, was released in 2013.

According to Briggs, the bridge produced an average of four to six suicidal persons each month in addition to multiple traffic collisions, and dozens of other law enforcement calls. During a retirement and recognition ceremony for Briggs, he was credited with saving more than 200 lives from attempted suicide during his 23 year career with the CHP.