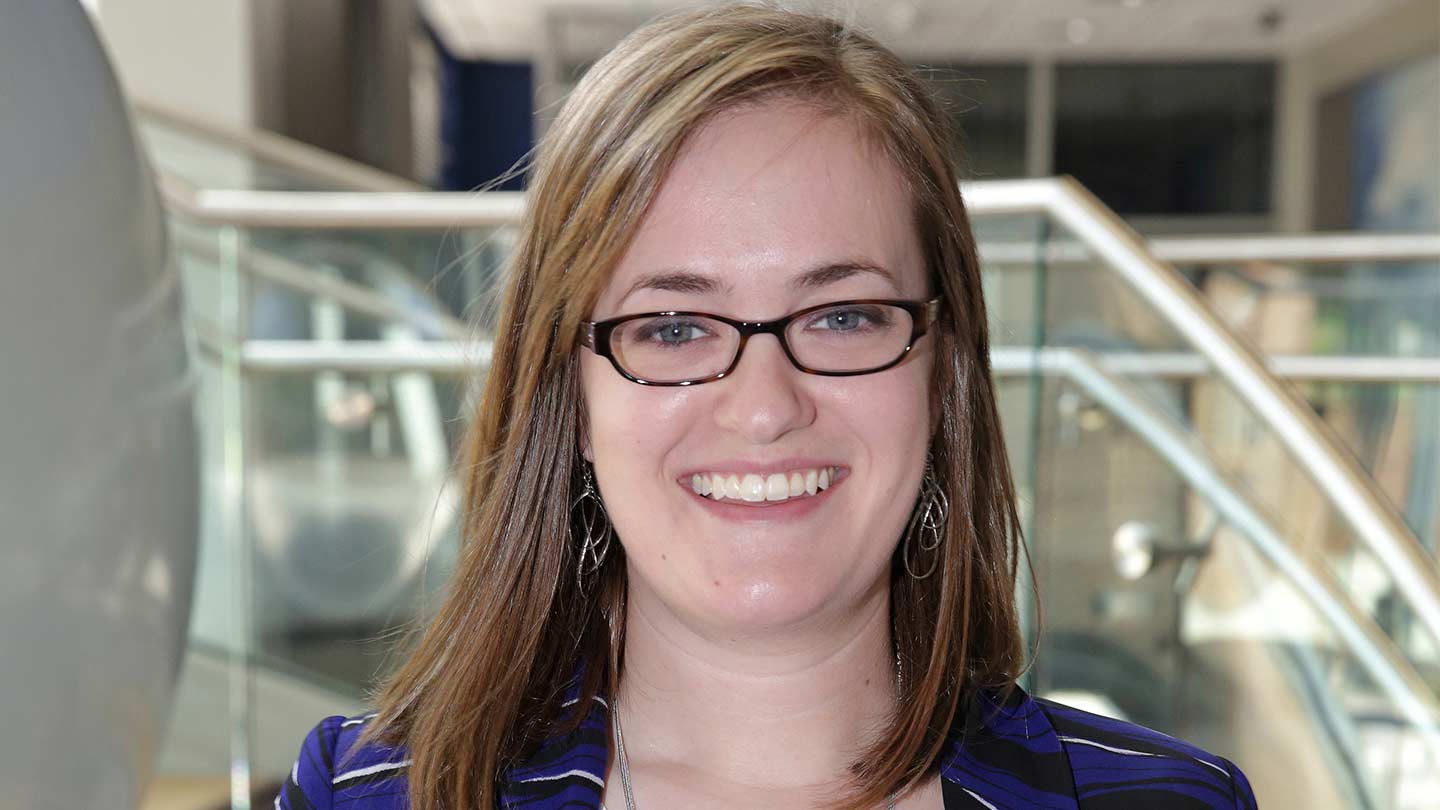 Christina Crowe during a tour of UAH's SWIRLL building in June.

When Dr. Louis Uccellini, the director of the National Weather Service (NWS), toured UAH's new Severe Weather Institute, Radar and Lightning Laboratories (SWIRLL) in June, that was – at least partially – part of Christina Crowe's strategic plan to show her boss the good work being done at UAH.

An advisor in Uccellini's office working with the NWS’s new Office of Organizational Excellence, Crowe wanted the director to see how well things can work in a setting that includes UAH's academic and research departments working with both NASA and NWS scientists and forecasters.

"It's a very productive environment you don't have in many places," said Crowe, who received her UAH Master of Science degree in atmospheric science in 2009. "I got to share that with the boss, the great things that are being done and how that collaboration works, the extra attention that is paid to how we transition research to operations."

Uccellini had some prior knowledge of programs in Alabama, Crowe said, but not much about UAH.

"He's had presentations from (NASA's) SPoRT program, and the Alabama emergency managers are some of the best and most vocal in the country," she said. "But this was his first time to be able to sit down and delve into it, and he loved getting lunch with the students in SWIRLL.

"I got to show him the great things that are being done at UAH, to show him, 'these people get it,'" she said. "I wanted him to see that here's an example of how it can work. Now, how can we learn from these lessons and apply them elsewhere?"

Thinking strategically is an important part of Crowe's job, as she finishes a two-year assignment in a National Oceanic and Atmospheric Administration (NOAA) leadership development program, working first in Uccellini's office and later on the staff of NOAA Administrator Kathryn Sullivan before going back to NWS headquarters.

"We're learning the ropes of how the agency works, and how it connects to NOAA," she said. "It's been fascinating and I love it. I like thinking big picture. I'm nosy and I like to know how things work."

Crowe has been that way since she was a child.

"In fourth grade, my class read the book, ‘The Night of the Twisters,’" she recalled in 2012. "The day we finished I remember riding home from school and seeing the sky turning green, as it had in the book. I told my mom this meant we were going to have bad weather.

"That evening, several strong hail storms hit our neighborhood (in south St. Louis, Mo.). That feeling of excitement over knowing what would happen sparked my interest in meteorology."

After earning her undergraduate degree at the University of Missouri, Crowe stumbled across UAH.

"When I was looking at grad programs, I didn't know anything about UAH," she said. "I remember thinking, 'Why would you go to Alabama?' But I also remember being pleasantly surprised when I found out more about the program."

During her second year at UAH, Crowe got a part-time internship at a NWS forecast office. She joined the weather service full time after graduation, and was one of two meteorologists manning radar screens in the Huntsville forecast office and issuing warnings during the April 2011 tornado outbreak.

"From the time I arrived on shift about 6:30 a.m., until I left around 9 p.m., I watched our radar screens for signs of storms that could produce large hail, strong winds or tornadoes," she recalled. "If I saw radar signatures that indicated a severe storm or tornado, I used a computer program ... to send a warning to the public.

"We had so many storms moving across our area, we had to tag-team warning responsibilities by each watching half of our (14-county area of responsibility). That day we had at least 40 tornadoes touch down in our (area) ... our office issued 92 tornado warnings between 3 a.m. and 11 p.m."

Her background at UAH and as a forecaster give her valuable insight as the weather service plans for its future, Crowe said. "They purposefully pull someone who has come from field offices to provide an immediate connection to the front lines. I think my experience at UAH was very helpful. I had a broader knowledge base in order to contribute to those conversations."