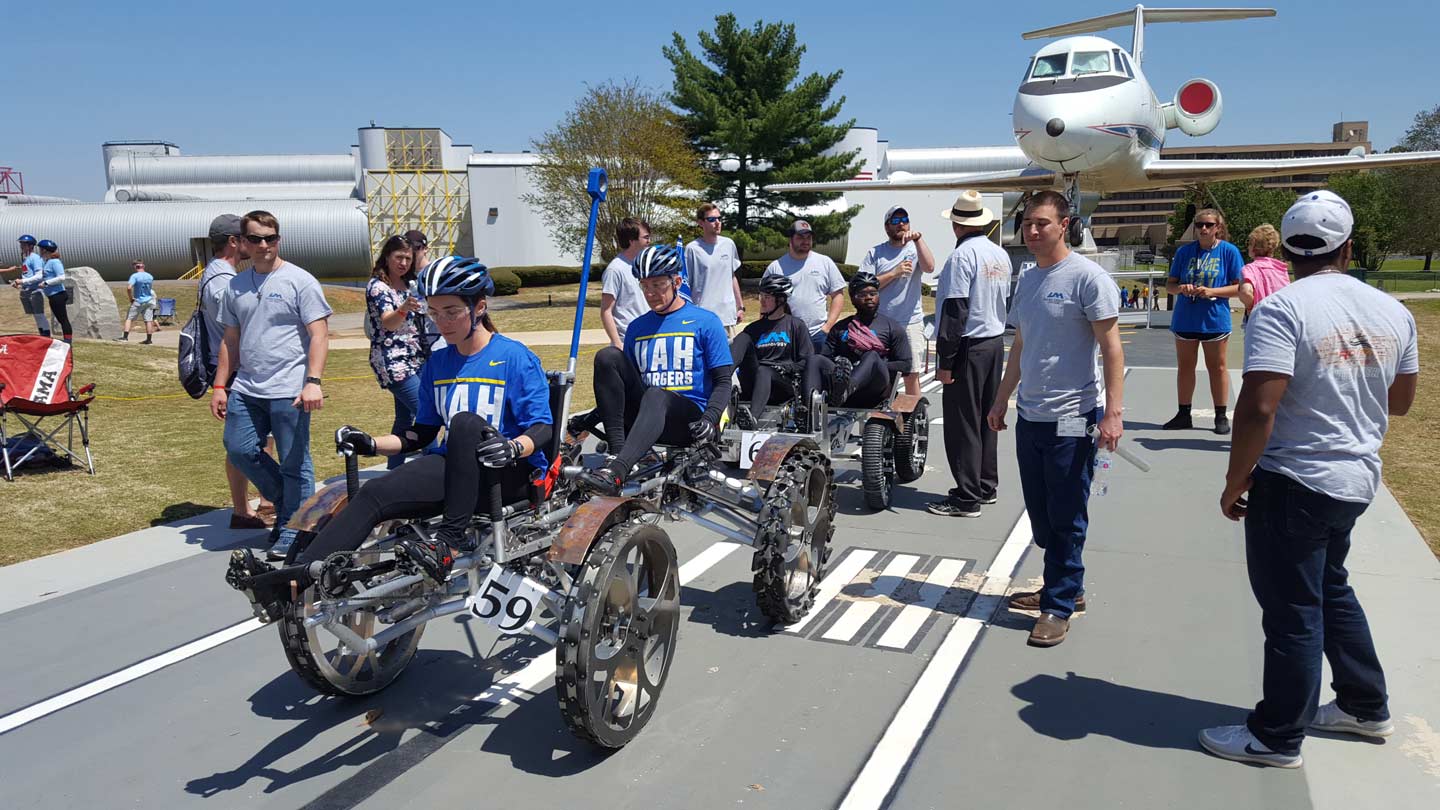 Both UAH rover teams are at the starting line at the U.S. Space & Rocket Center.

First two teams in the moon buggy senior design class each designed and fabricated two rovers from the ground up, and then University of Alabama in Huntsville (UAH) Team Chargernaut snapped a six-year drought to capture first place in the weather-shortened NASA Human Exploration Rover Challenge.

Both Team Chargernaut and Team Red Rover Squared competed April 13 at the U.S. Space & Rocket Center. The two teams were composed of students from the 24-member class.

"This reflects the hard work that the students put in the design, analysis, fabrication and testing of the rover. Countless hours were put in to accomplish this task. They learned so much of how working as an engineer in industry really works," says David Fikes, Department of Mechanical and Aerospace Engineering (MAE) senior design class lecturer and team adviser.

"Both competed and represented UAH and MAE very well. I am proud of both teams. It is great to get the first place trophy back in UAH domain," Fikes says.

"As a team, we are ecstatic," says Emily Orlock, Team Chargernaut lead. "A lot of people didn’t even think we would compete, let alone win."

"The drivetrain system was one of the best out on the course thanks to Drivetrain Lead Robert Vachon," Orlock says. "Sally’s wheels are sturdy, composed of aluminum plates welded together and then water-jetted to cut some weight. Needless to say, she’s a tank."

The Chargernauts built their rover from scratch using raw materials. Most of the manufacturing was conducted in Greising’s shop in his garage. The only components that were bought were drivetrain parts, wheel hubs and shocks.

"A lot of the challenges the teams faced are representative of what happens in industry. We had issues with funding, and some of components for the buggy had long lead times," Orlock says.

There was also a learning curve for many teammates because there was little machining knowledge, so it was the first time a lot of them utilized shop tools.

"NASA claims it takes eight to 10 months to build a functioning rover. However, NASA did not release the requirements until late October, so we did it in five," Orlock says.

The team is grateful to Greising and his family for allowing the use of their at-home shop and providing safe rover storage, and to the Aviation and Missile Research, Development and Engineering Center (AMRDEC) Prototype Integration Facility for allowing the team to utilize tools not accessible at the in-house shop.

"The team would also like to thank our advisor, David Fikes," Orlock says. "Nothing can compare to having an instructor with such passion. His enthusiasm and support for this project has been invaluable."

"I also would like to thank the MAE department, the COE, and NASA for their support. I also appreciate the volunteers from NASA for making the event happen," Fikes says. "This has been a lot of fun and we are already making plans for next year’s class and the building of successful rovers."