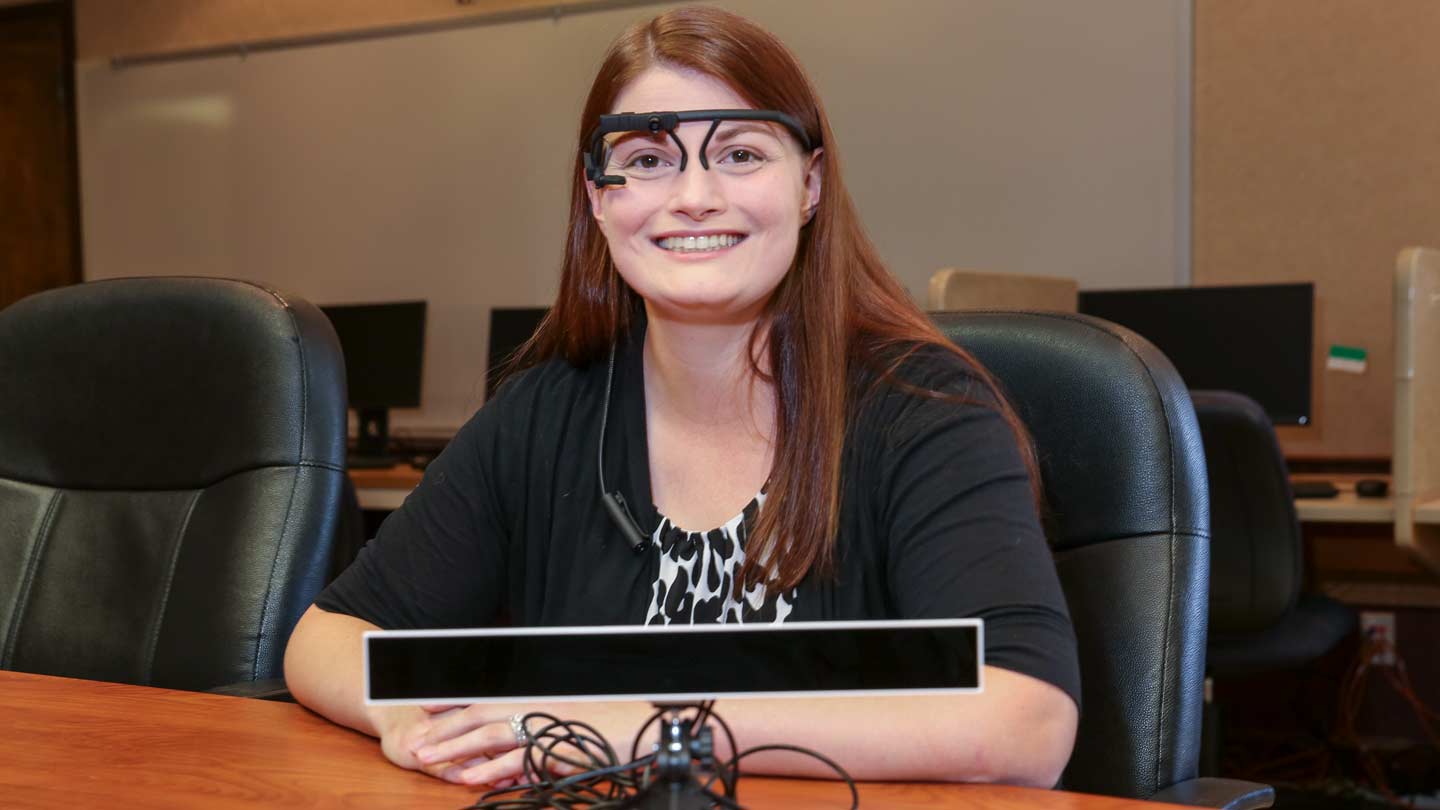 Dr. Candice Lanius, an Assistant Professor in the Department of Communication Arts and a staff member of the Department of English’s eValuation and User Experience Lab, demonstrates some of the high-tech equipment used in the lab while explaining her study on public speaking anxiety.

As a researcher, Dr. Candice Lanius is less interested in why people are so afraid of speaking in public and more focused on how cutting-edge technology can be used to help them improve in spite of their fear. "Public speaking anxiety becomes a problem when the response to the stimulus spirals and the person speaking can’t calm down and focus on what they’re doing," says Dr. Lanius, an assistant professor in the Department of Communication Arts at The University of Alabama in Huntsville (UAH). "I want to understand what’s causing them to have a stressful response, so that we can train them to become better speakers."

To that end, Dr. Lanius has enlisted over 140 student volunteers enrolled in the Department’s "Introduction to Rhetorical Communication" course, which seeks to develop public speaking skills through an examination of rhetorical theory, training, and practice. Students in the class are required to present four speeches over the course of the semester: the first is a simple introductory speech; the second is a special-occasion speech one might give at a graduation or wedding; the third is an informative, fact-based speech; and the last is a persuasive speech one might give on behalf of a charitable cause or a political candidate.

"The first thing I did, with the consent of the instructors and the students, was take a public speaking anxiety self-reported inventory, to see how comfortable the students thought they were with public speaking," she says. "Then for all four of the speeches, I came in and did an audiovisual recording of the speech and had the student wear a heart-rate monitor while they spoke. That gave us their average heart rate and, more importantly, their heart-rate variability, which is the interval between heart beats. It’s a better measure of stress because it’s not as closely related to health."

As Dr. Lanius explains, a speaker’s heart-rate variability can indicate if they’re switching into a sympathetic nervous system response, commonly known as a "flight or fight," or staying in the parasympathetic nervous system response, commonly known as "rest and digest," to stressors at any given time during the speech. By simultaneously taking an audiovisual recording of the speech, she can then use the recording’s time stamp to reference the heart-rate monitor results to see what might be triggering a particular response in real time. "For example, transitions make students super nervous, even if they have notes or prompts," she says. "Another stressor is juggling visual aids. Students may think ‘I know the content, so I’m fine,’ but they forget that the body is the organ for transmitting the information."

For any student who is interested, Dr. Lanius meets with them after the speech and reviews the data. "I am very careful to not use assessing language, as I’m not there to grade them," she says. "I’ll say, ‘You were more stressed during this moment. What was going on here?’ It’s really about helping them learn how to come out of those moments, so that they don’t spiral and become overwhelmed." She’s also planning to follow up with the instructors at the end of the semester, to see whether there’s any correlation between a student’s stress level and their performance. "I don’t need to know their grade, but I do want to see if stress affects their grade," she says. "Once we know that, we can go back to the curriculum and see what we need to do more of to help them overcome or recover from stressors."

It helps that Dr. Lanius has easy access to the technology needed to conduct her study through the Department of English’s eValuation and User Experience (VUE) Lab, a dedicated space for user-experience research that is open to UAH faculty and students as well as members of the community. The VUE Lab is equipped with computers for testing and monitoring participant reactions, eye-tracking devices to study gaze and attention, and video recorders for remote observation, all of which can be used to better understand how people feel as they interact with a wide variety of stimuli. "We’re usually testing new user interfaces for different products or websites," says Dr. Lanius, who also teaches a graduate-level user-centered design course in the lab. "So we look at pupil dilation, fatigue based on blink rate, and those types of things to get an idea of what the user is focused on or what’s distracting them."

Among the lab’s other users is Dr. Seth Lee, a lecturer in the Department of English who is studying how people encounter, experience, and consume medieval illuminated manuscripts consisting of intricate hand-drawn images. "Eye tracking allows us to quantify students’ experience with the images, such as how many times a student returned to a specific aspect of the image, and trace the intensity of emotional responses to various stimuli," says Dr. Lee, whose book "The Discourse of Exile in Early Modern English Literature" was published last winter. "It can help us better understand how illuminations function rhetorically in the manuscripts themselves and speculate about how medieval readers, many of whom were otherwise illiterate, may have gleaned information from them. And it benefits us pedagogically by indicating how students encounter illuminations for the first time, and therefore, how and where to focus students’ attention to an illumination’s rhetorical purpose and composition."

As word of the VUE Lab spreads, Dr. Lanius is hopeful more researchers will take advantage of the technology it offers to gain insight beyond that garnered by more traditional techniques. "We’re still using interviews and surveys, but in addition to asking what you think, we’re also tracking your eyes and using the heart-rate monitor," she says. "I hope that once people can see what we’re doing, anyone at UAH who wants to use biometric equipment to test objects will be inspired to collaborate as well, whether it’s trying to determine how readers engage with graphic novels or whether a particular new car console contributes to distracted driving."