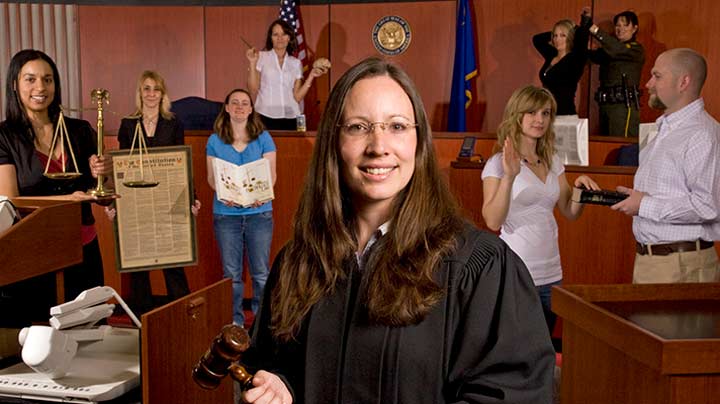 Monica K. Miller, prominent University of Nevada, Reno, legal scholar will give a public talk on the separation of church and state at UAH on Thursday, Nov. 9, at 6:30 p.m.

Monica K. Miller, prominent University of Nevada, Reno, legal scholar will be the guest speaker for The University of Alabama in Huntsville (UAH) Humanities Center on Thursday, Nov. 9.

Miller's public lecture will focus on the notion of separation of church and state through a historical lens, examining the intersection between religion and the courts in American history and society. She will give her presentation at 6:30 p.m., in Morton Hall room 200 on the UAH campus. Miller's talk is free and open to the public. Her visit to the university is sponsored by the UAH Humanities Center located in the College of Arts, Humanities and Social Sciences, Department of Psychology, and the UAH Distinguished Speaker’s Series in the Office of the Provost.

"A great challenge to our justice system throughout our history has been to balance the independence of religious belief against the need for a uniform and impartial rule of law," said Dr. Monica Miller, Professor in the Criminal Justice Department and Interdisciplinary Social Psychology Ph.D. Program at The University of Nevada, Reno (UNR). In her UAH presentation, Miller will discuss how this “balance" is conceptualized and how it has or has not been maintained at institutional and individual levels. Miller will also review how religion and law interact to mutually influence and shape religion, legal decision-making, and public policy.

For example, Miller said, "Utah was forced to outlaw polygamy—a largely religious practice—before the U.S. allowed it to become a state and religious use of Peyote led to the development of case law. Case law has enacted boundaries establishing when and how law can regulate religion and its practices," she noted.

"Case law has also established the constitutionality of laws that give churches and their members exemptions, helped resolve internal church disputes, and established rights of groups such as prisoners and Native Americans," Miller said. "Separation between church and state can also be examined at the individual level. For example, can (and should) legal actors disentangle religious-based moral convictions from legal decision-making? One example is the use of religious motifs when arguing about the death penalty."

She pointed out too, that Supreme Court seats were once deemed by some to have a 'Catholic seat' and 'Jewish seat'. "This historical phenomenon suggests that religious moralities, philosophies, and ethics affect legal decision-making, thus, how can there be concrete separation, or, perhaps more importantly, what constitutes 'separation?'"

Miller will also touch on recent controversies, such as the blocking of President Donald Trump’s travel ban, which targets travel from several Muslim countries and the alleged religiously-motivated female circumcision case in Michigan. "By tracing the history and jurisprudence of religion law, it is possible to analyze whether it is possible—or even desirable—to fully separate 'church and state'."

A legal scholar and social psychologist, Miller has a split appointment between the Criminal Justice Department and the Interdisciplinary PhD Program in Social Psychology at UNR. She is also an adjunct faculty member at the Grant Sawyer Center for Justice Studies and a faculty associate for the Women's Studies Program.

Miller specializes in research pertaining to the role of religion in the legal system. She serves as co-editor to New York University’s Psychology and Crime book series as well as Springer’s Advances in Psychology and Law book series. She is also on the editorial board of Psychology Crime, and Law. In addition, Miller has authored Religion in Criminal Justice and co-authored God in the Courtroom: Religion’s Role at Trial. Miller has also published nine books, more than 100 journal and law review articles and over a dozen chapters to edited volumes.