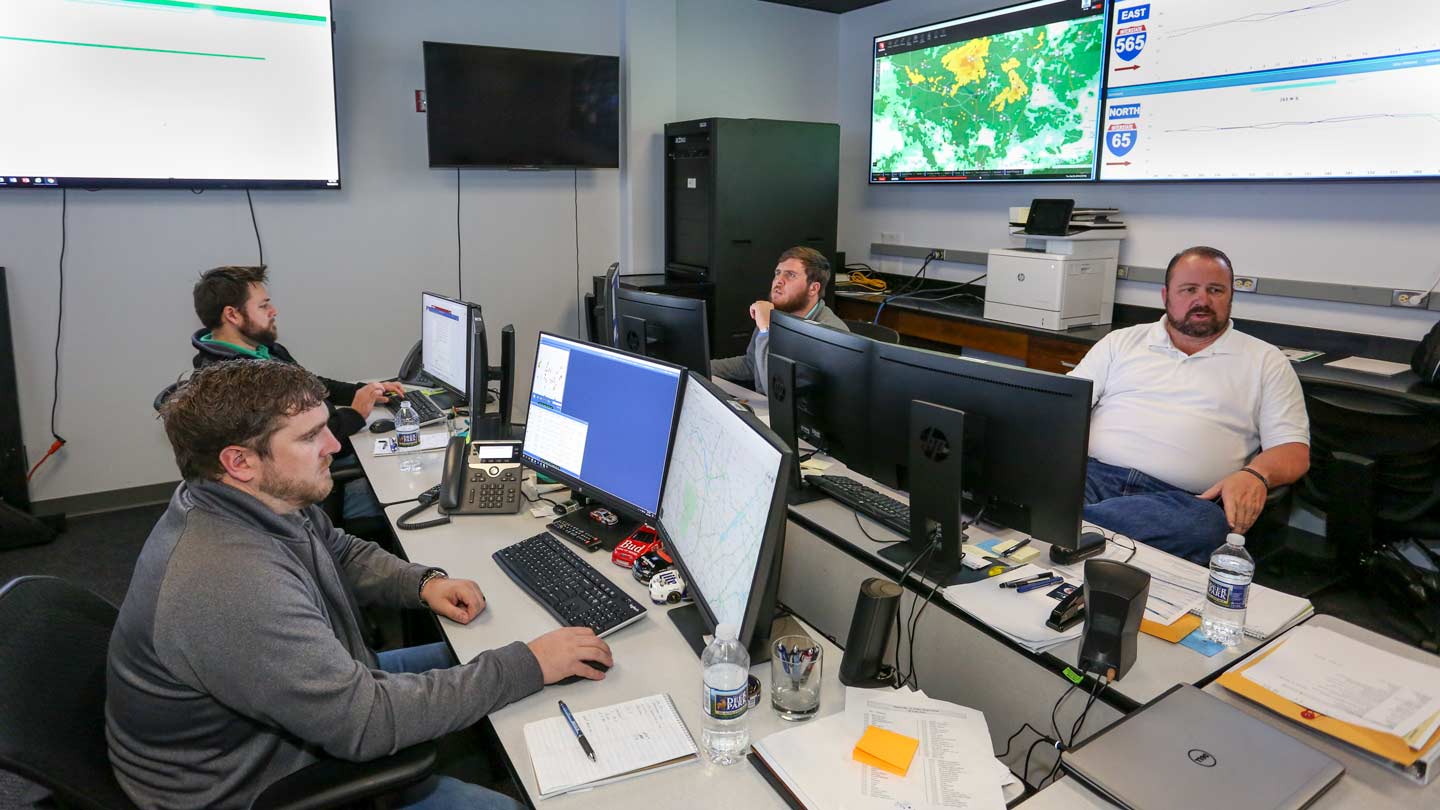 Located on the UAH campus, the North Regional Traffic Management Center is one of five administered by the Alabama Department of Transportation. Its staff members – Steven McEwen, Jonathan Eubanks, Forrest Evans, and Glenn Taylor (pictured clockwise), along with Lori Rigsby (not pictured) – monitor the region’s traffic and provide the public with verified, real-time travel information via the ALGO Traffic website, its Twitter feed, and its mobile app.

It’s a rainy Thursday evening in Huntsville, and you’re stuck in bumper-to-bumper traffic. You can feel your blood pressure rising as you lean out the driver’s side window to see just how far the line of tail lights ahead of you go on for. Was there an accident? How long is the backup? Is there any way to get around it? Just then, you remember the new app you downloaded earlier in the week. Within seconds, you’re able to see that the source of the traffic jam, a moderate crash, has resulted in the closure of one lane. Law enforcement is already on the scene and working quickly to clear away the debris, but by now, you’ve used the app’s map to identify an alternate, traffic-free route home. A few turns later, you’re back up to speed and on your way.

Introducing ALGO Traffic, available for free online, via Twitter (@algo_hvl), and in the app store. "It’s similar to community-based GPS navigation apps, but our information is verified rather than user submitted," says Glenn Taylor. A retired state trooper, he now manages the North Regional Traffic Management Center (TMC), one of five administered by the Alabama Department of Transportation (ALDOT). Together with his staff of four operators – Steven McEwen, Jonathan Eubanks, Forrest Evans, and Lori Rigsby – Taylor gathers traffic information about state/federally maintained roadways from a variety of sources, including ALDOT and law enforcement cameras and radios, 911 dispatch centers, weather stations, and other official sources. The team then disseminates that information via the three aforementioned channels. "We ensure that the public can make an informed travel decision," he says.

The TMC is headquartered in Olin B. King Technology Hall on the campus of The University of Alabama in Huntsville (UAH), thanks to a deal struck between ALDOT and Dr. Michael D. Anderson, interim chair of UAH’s Department of Civil & Environmental Engineering. "They contacted me because their West Central Regional TMC is located at a university and they thought it would be a good fit," says Dr. Anderson, a longtime ALDOT collaborator. "So we provide the space for them, and in return, we will be using the data they collect in our research efforts to better understand traffic flow. They’ll also be hiring some of our students to work alongside them, giving them hands-on experience in the field."

Taylor and his team are responsible for monitoring conditions across 13 counties that make up the ALDOT’s North Region: Cherokee, Cullman, Colbert, Dekalb, Etowah, Franklin, Jackson, Lauderdale, Lawrence, Limestone, Madison, Marshall, and Morgan. And because four of these counties abut the Tennessee border, that includes traffic going into and out of each state. "If there’s an event close to the Tennessee state line or if I-65 shuts down, we let Tennessee know that, for their travelers, anyone southbound would be detoured," he says. "And they do the same for us." The operators work in shifts, with two required to be present at any given time. That arrangement allows them to keep the center open 14 hours a day, five days a week, with coverage transferring to the East Central Regional TMC overnight and on the weekends. "We aren’t able to go to 24 hours yet, but we’ve already extended our hours by two so far and we’ve hired two part-time workers, Dario Gonzalez and senior civil engineering major Katherine Holley," says Taylor.

When a traffic event does occur, the operators on staff gather the pertinent information and upload it into the TMC’s proprietary system. "We take into consideration the time of day, the number of vehicles involved, the number of lanes blocked, the number of responders, and that type of thing when we determine severity," says McEwen. a transfer from the East Central Regional TMC located in the Birmingham area. What they don’t do is add extraneous or subjective information. "We can put notes in the system so that the other TMC operators can go in and be updated, but we follow a template for what gets seen by the public." That information is then uploaded to the ALGO website and app, and automatically tweeted out on the TMC’s Twitter feed.

For McEwen, the job has proven to be a singular offshoot from his previous career as a traffic investigator for the U.S. Army. "Sometimes I miss it but there’s a lot more to traffic management than I ever understood or realized," he says. "Since I’ve gotten here, it’s grown on me even more." The same is true for Eubanks, a former patrol officer. "It’s nice just to have a little change of pace compared to patrol work," he says. "It’s a different side of working accidents and getting information to the public." As for the newest member of the team, Evans, he’s hard pressed to explain how he ended up at the TMC after working at a juvenile detention center for most of his adult life. "I can’t tell you what exactly drew my eye, but it seemed interesting and I have not been let down," he says with a laugh. "I like seeing how things impact the flow of traffic and being able to help people not be stressed out on their commute."

The ultimate hope is that, together with UAH, the TMC won’t just help alleviate stress on the region’s commuters; it will also help ameliorate the flow of traffic so as to reduce the source of that stress. "The interaction between traffic managers and traffic researchers will allow for an improved understanding of travel behavior and congested travel conditions," says Dr. Anderson of the symbiotic relationship between the two. "The ultimate goal is to provide travelers improved information at present, while assisting in determining the future travel and infrastructure needs to reduce congestion in the years ahead."