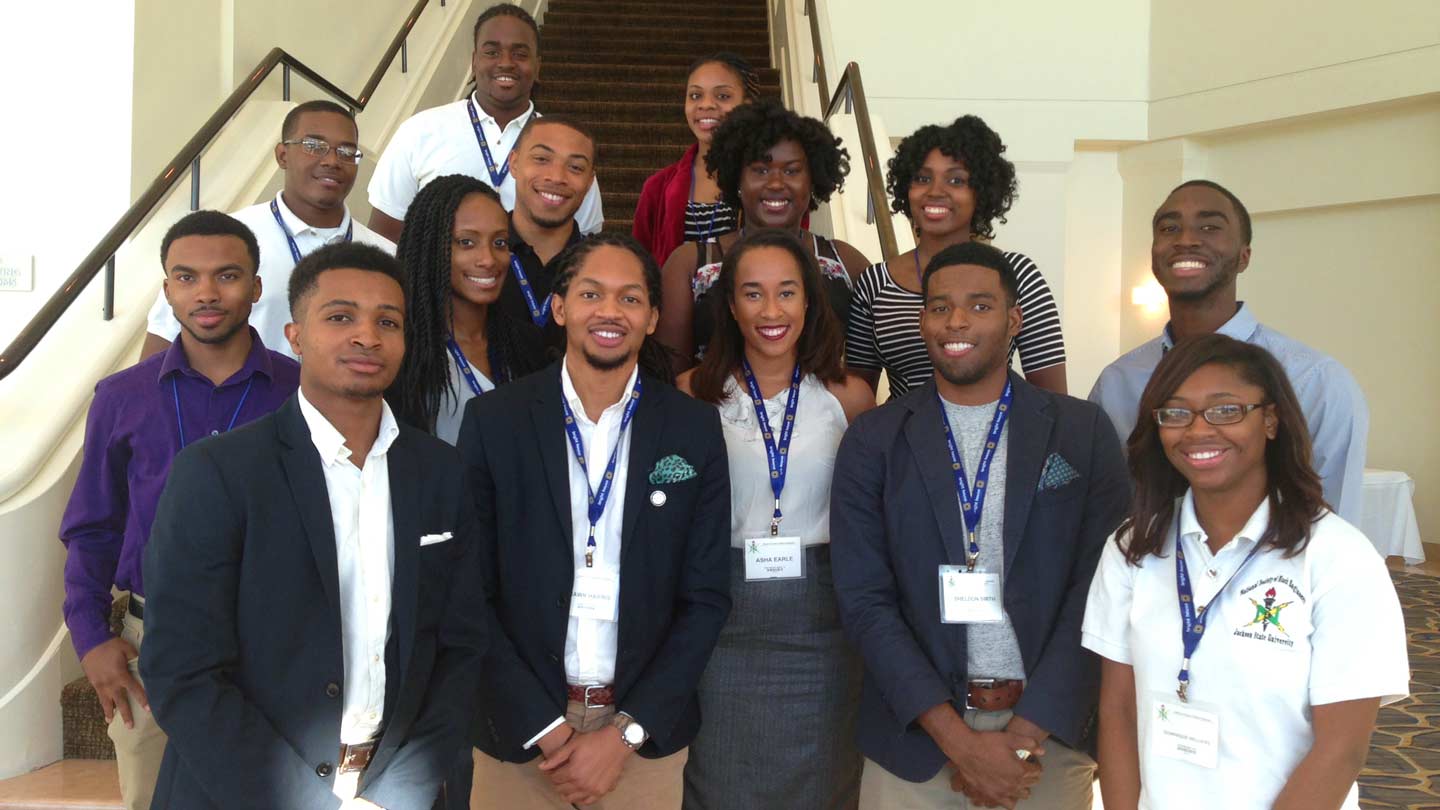 The National Society of Black Engineers (NSBE) has a student chapter at The University of Alabama in Huntsville (UAH), but don't let the name fool you. "We represent all minority students in the engineering fields," says junior mechanical engineering major and chapter president David McNair. "And we've even been working on having non-engineers join us!"

Indeed, since being elected to the top spot last year, McNair has made an effort to expand the focus of the chapter to include any underrepresented students with the shared objective of being culturally responsible and academically and professionally successful. "It's like a support network," he says. "I want to give those who need help and have the same goals that we have somewhere to go."

UAH's chapter is currently the largest in Northern Alabama. It is overseen by an executive board and comprises four committees - fundraising, outreach, national conference, and rocket launch - with meetings for each held on a rotating schedule. Members are also invited to the chapter's monthly general body meetings, which are often centered on a particular theme.

"It helps the students stay focused on what's coming up," says McNair, adding that topics have ranged from dressing for an interview to giving an elevator speech. One of the most popular featured a panel of guest speakers from the local business community. "They talked about how they got where they are, the challenges they faced, and how they overcame them."

I want those people who come after us to go way further than we did.

Between meetings, the chapter hosts events both on and off campus, occasionally partnering with fellow student-run organizations like the Society of Hispanic Professional Engineers and the Society of Women Engineers. These events offer members the opportunity to interact with their peers, professors, and industry professionals, often in a philanthropic setting.

When it comes to networking opportunities, however, nothing beats the NSBE's regional and national conferences. "The experiences they provide for young minority science and engineering students is invaluable," says McNair. "From beginning to end, they focus solely on making better, more qualified, and more capable minority professionals."

Last year, McNair decided to open up the opportunity to attend the regional conference in Tampa to more than just UAH students. "What kind of person would I be if I had something and didn't give it to someone else?" he says. So with the help of corporate sponsorship from Lockheed Martin, the chapter rented a tour bus and traveled to Oakwood University, Tuskegee University, and Mississippi State to pick up their fellow NSBE members.

"We got to meet a whole lot of people we wouldn't have met otherwise," he says. And the plan is no different for the upcoming national conference in California this March, though in that case the students will be flying rather than driving. "We want to fill the plane with members from other schools," he says.

That, of course, means the chapter will need to raise more money than it has in the past. But McNair is undaunted. He has already contacted several local companies about corporate sponsorship, and in the coming weeks, the chapter will host two fundraisers: a speed dating and silent auction event scheduled for Thursday, Feb. 12, and a Pi Day planned for March, where students can pay to pie their professors.

As for the extra work involved, he shrugs it off. "I want to stand out because we're genuinely caring," he says. "We all have that 'someone helped me so I want to give it back' mentality." And though the chapter's members have earned a reputation for being high-achieving students, he knows that true success is measured in more than just good grades. "We're trying to make engineers who are culturally responsible community servants."

But as with any student-run organization, it can sometimes be hard to build momentum in the face of the relentless turnover that college graduation brings. "I don't want to be the person who says, 'I'm done,' and leaves it all in a mess," says McNair. "We have to make sure that people who come after us have something to grab on to."

That's why he's charged the executive board with mentoring younger members who can one day take over as the chapter's leaders - and with continuing to recruit new members as soon as they arrive on the UAH campus. "I want those people who come after us to go way further than we did," he says. "So if you're looking for an organization to join and be valuable, then we have a role for you!"