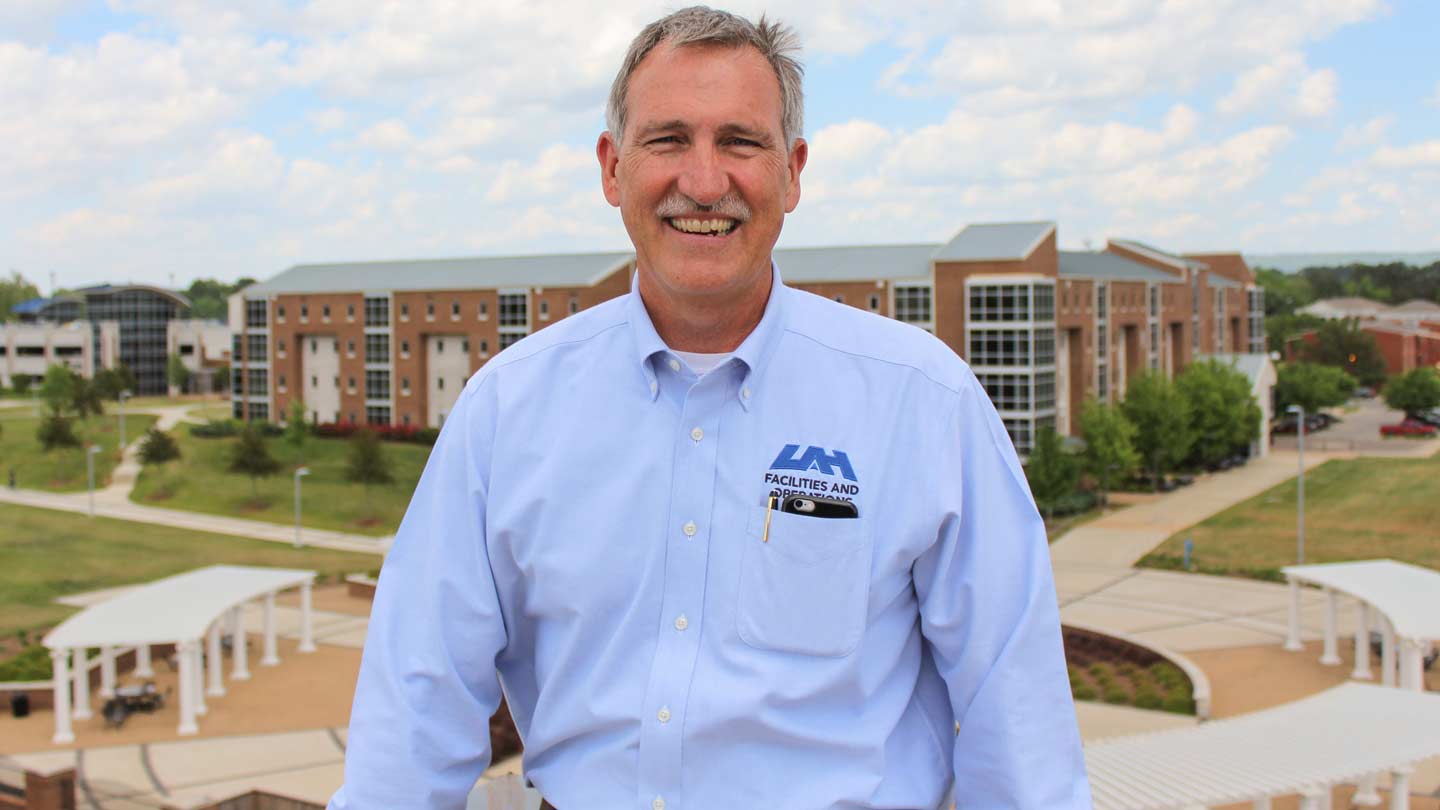 The one piece of advice Michael "Mike" Finnegan would give to his successor is this: "Never let people rent space in your head for free. Remain honest, fair, and diligent."

Finnegan, Associate Vice President of Facilities and Operations shares these words of wisdom as he prepares to retire from The University of Alabama in Huntsville (UAH) on July 1. He began his tenure at the university 15 years ago as Executive Director of Facilities.

Finnegan supervises the UAH Police Department, Office of Environmental Health and Safety, Facilities Maintenance, Campus Planning and Construction, and Emergency Planning. His key responsibilities could fill a college textbook, but what Finnegan will be remembered for the most is completing renovations to several existing structures and managing the construction of 10 major building projects on the UAH campus.

Every day at UAH has been rewarding…I have the opportunity to work with a great group of people and to make a difference in the lives of young adults and the community I grew up in.

"Mike has contributed greatly to the growth of our campus over the past 15 years, and the positive impact of his tireless efforts are evident as the campus has developed. His ability to manage multiple construction projects simultaneously while also beautifying the campus and keeping existing facilities in good working order is unparalleled," said Ray Pinner, UAH Senior Vice President for Finance and Administration. "Above all, he always has a positive attitude and a unique ability to relate positively to faculty, staff, and students, as well as our trustees, local officials, and others. We will all miss him, and we wish him the very best in retirement," added Pinner.

Finnegan said the business of constructing buildings - from conception to ribbon cutting can be an iffy situation. "It's a moving target depending on funding sources, building size, and function. On average, for the buildings constructed on the UAH campus in the last 14 years, it takes about two to three years for each structure."

Before his employment at UAH, Finnegan worked 23 years at the Von Braun Center. "The work was similar in some ways, but also included event planning."

His secret for mastering patience with university employees, off campus work crews and coping with lengthy jobs, is quite simply to embrace the challenge. "I enjoy working with people, and I love a challenge. I find that with open, honest communication and a positive attitude there are no challenges too large," Finnegan said.

As Finnegan prepares to leave the university's construction projects to someone else, he said remodeling plans and new buildings coming to campus include the UAH Invention to Innovation Center, renovation of University Place School, and there is "some early conversation" about an additional residence hall.

In September 2015, the U.S. Economic Development Administration awarded UAH a $3 million grant to build The Invention to Innovation Center (I2C). The I2C will provide physical facilities, captivities and services to support inventors, entrepreneurs, high-tech companies and partners in the innovation process.

"Every day at UAH has been rewarding," Finnegan said. "I have the opportunity to work with a great group of people and to make a difference in the lives of young adults and the community I grew up in."

Finnegan said he would like UAH to remember him as an honest, hard worker, that enjoyed a challenge, and truly cared how the university's campus looked and operated.

Now that his time is his own, Finnegan's plans include golfing, sailing, snow skiing, and "lots of travel" are on the short list. "This should keep down the amount of time I have to work on the 'honey-do list'."

A retirement reception in honor of Finnegan will be Thursday, June 23, from 3 p.m. to 5 p.m. at the Tom Bevill Conference Center. Please confirm your attendance: rsvp@uah.edu by June 17.