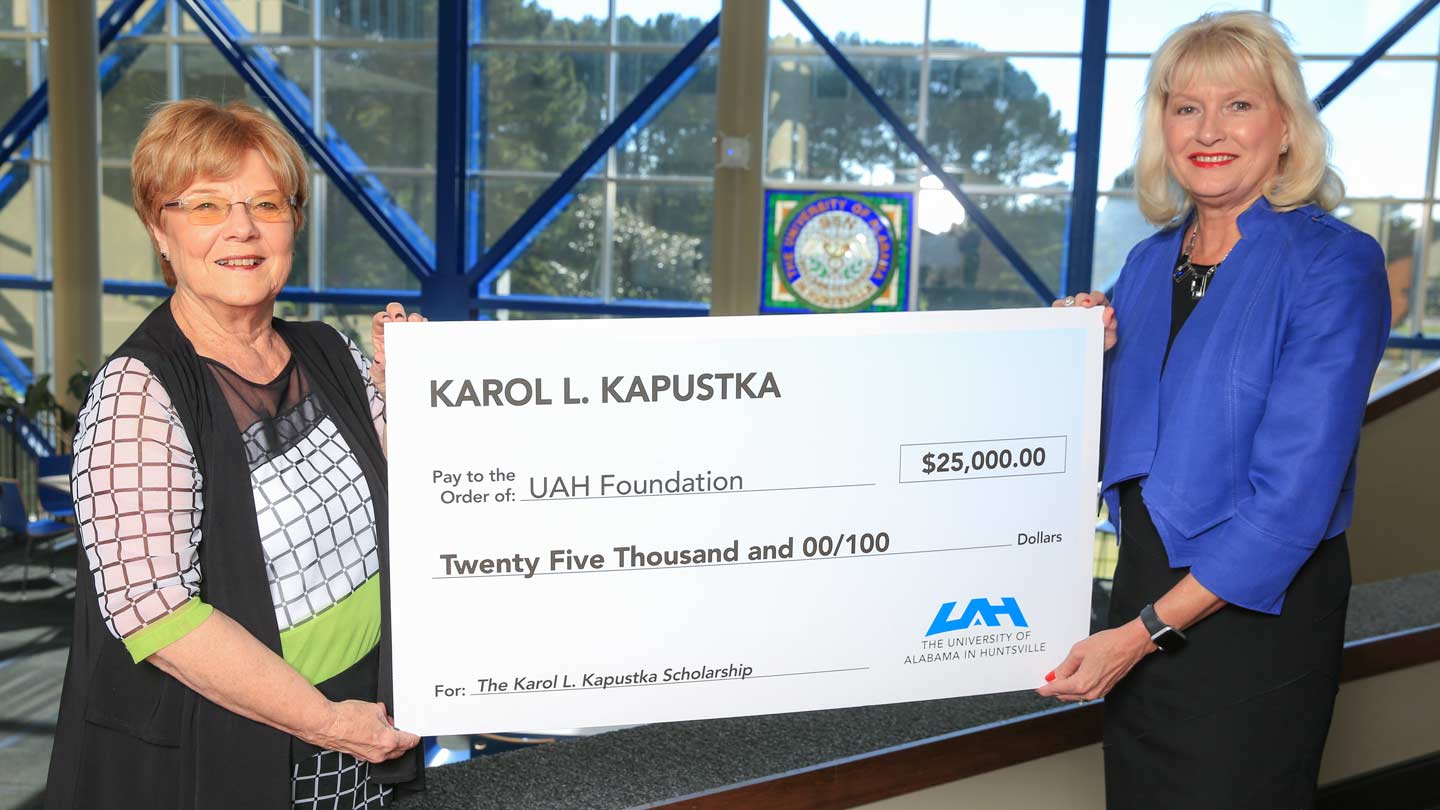 A $25,000 endowed scholarship fund for nursing students has been established by College of Nursing alumna Karol Kapustka, who earned both her bachelor of science degree (1977) and her master’s degree (1994) at The University of Alabama in Huntsville (UAH) and has remained active on campus.

The Karol L. Kapustka Scholarship will be awarded to one or more full-time, junior or senior undergraduate students enrolled in the college.

"I wanted to help provide funds so that other young women or men could pursue a career in nursing that would give them a wonderful career, as well as prepare them for raising and supporting a family. I felt this would be a way to give back to the university for all they have given me and to help other students pursue a career in nursing and hopefully enjoy it as much as I have," Kapustka says. "I felt that the education I received from the UAH College of Nursing played a role in preparing me for my nursing career."

"On behalf of the College of Nursing, I would like to personally thank Ms. Kapustka for this endowed scholarship," Dr. Marsha Adams, College of Nursing dean, says. "It will enable nursing students to meet their goals of becoming a professional nurse and a future nursing leader."

Adams recently invited Kapustka to become a member of the Nursing College Advisory Board.

"In August, I was given a tour of the newly renovated College of Nursing Building by Dean Adams and was so impressed with the simulation labs and opportunities for the nursing students to gain hands-on experience prior to entering the clinical area," Kapustka says. "She then invited me to participate in her newly organized Nursing College Advisory Board. This gives me an opportunity to stay involved in the nursing field."

A member of the Alumni Association Board from 1989 to 2003, Kapustka served as secretary from 1991-92 and president from 2002-2003. In 2002, she was named Alumnus of Achievement during the Fifty Years of Class Celebration. In 1981, she received the Outstanding Alumnus Award.

"During my years of being employed as a nurse in the Huntsville hospitals, I stayed involved with the UAH College of Nursing by participating in activities supporting the students," she says.

In 1970, as a member of the Alabama State Nurses Association (ASNA) Fourth District, she served on a fundraiser committee for the Nurses Continuing Education Fund to begin the baccalaureate program for nurses at UAH. She served in leadership positions in the ASNA and the Alabama Organization of Nurse Executives.

Currently retired after a 42-year nursing career, Kapustka worked in the Surgical and Cardiac Intensive Care Units as a shift supervisor and was assistant director of nursing at Medical Center Hospital when it was owned by Humana Hospital. After Huntsville Hospital bought the Medical Center in 1994, she worked in various positions including quality management, assistant director of nursing, nursing informatics liaison to the Information Technology Dept., and manager of supervisors and the Staffing Office. She retired in 2008.

"I enjoyed every minute of my nursing career," Kapustka says. "It was the best profession to be employed full-time, or part-time while raising a family and then returning to full-time. I always felt I stayed connected to the career and through continuing education I remained current. Nursing is the best career to combine employment and the raising of a family."

Kapustka’s son Tacoma is a UAH electrical engineering graduate who lives in Santa Rosa, Calif., and works for Juniper Network. He is married to Dana Ingram and they have three children: Pierce, 15 and a sophomore; Reese, 12 and a sixth grader; and Allison, 10 and a fifth grader.

Her daughter Michele graduated from Auburn with a degree in accounting and lives in Austin, Texas. She is married to Charlie Roach, and they have two daughters: Mackenzie, 20 and a junior in nursing at the University of Texas in Austin; and Elizabeth, 18 and a senior in high school who wants to pursue a career in nursing.

Her husband Robert Kapustka, who passed away in 2015, also attended classes at UAH while working on a master’s degree. He was an electrical engineer who worked for NASA for 41 years and retired in 2008.