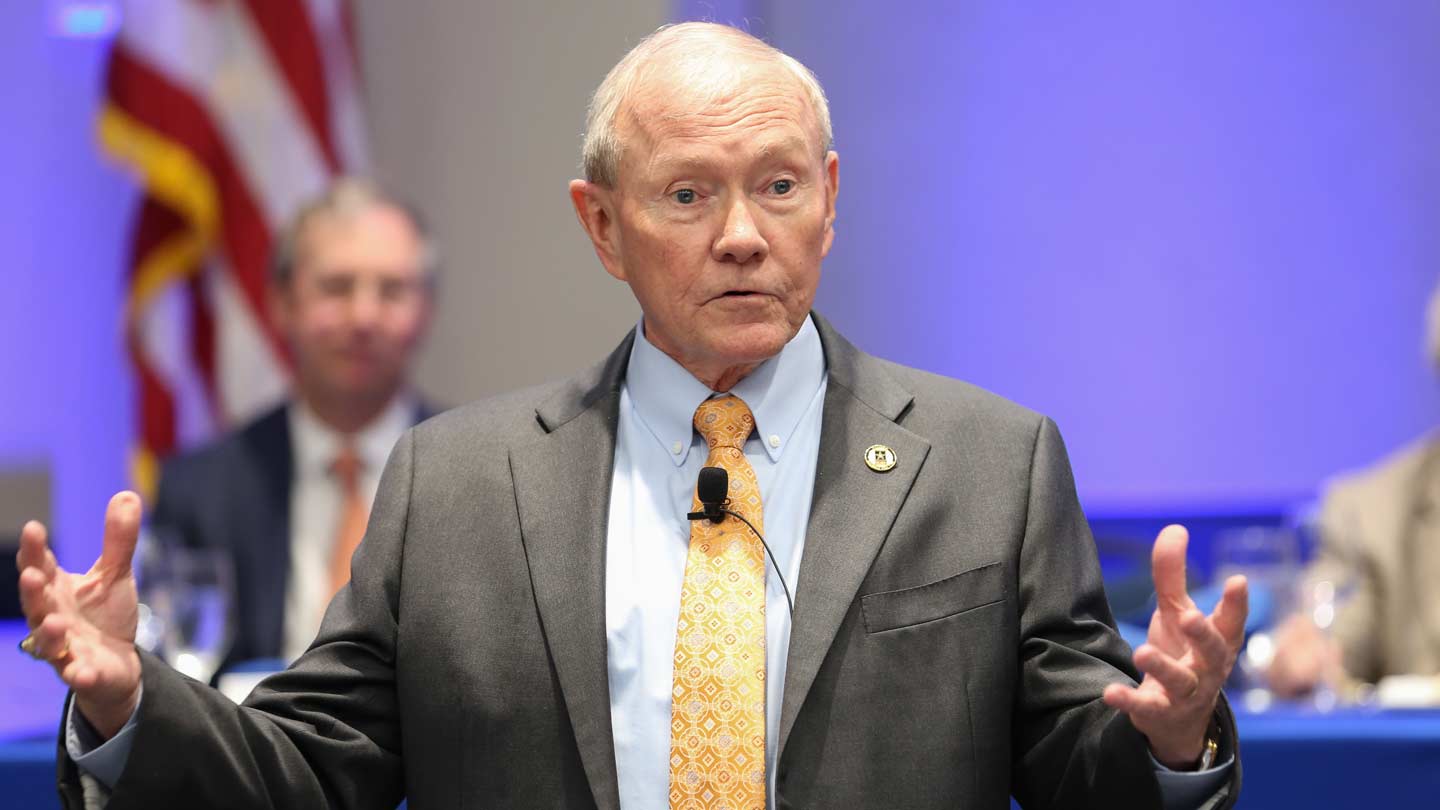 In a connected world awash in 24-hour news cycle information and disinformation, the United States will continue its vital global leadership role as long as its leaders remember the reasons for established global alliances, Gen. Martin Dempsey told defense and community leaders at The University of Alabama in Huntsville (UAH) Monday evening.

"I am optimistic about the future for our country," said Dempsey, a retired decorated four-star general, chief of staff of the U.S. Army and chairman of the Joint Chiefs of Staff who specializes in the complexity that characterizes today’s strategic environment.

A visitor to 94 countries, Dempsey capped a 41-year career by serving as the nation’s highest ranking military officer and the principal military advisor to the president, secretary of defense and National Security Council.

In 2015, Dempsey was named one of the 100 most influential leaders in the world by Time magazine, an experience he said caused him to buy a copy and to see where he was on the list.

"My little bio was between Kanye West and Kim Jung Un," he said to laughter from the audience.

Dempsey spoke at UAH as part of the university’s Distinguished Lecture Series. The series brings nationally recognized guest speakers to Huntsville to enhance community collaboration and assist the development of Redstone Arsenal. It fosters better understanding of current events and future trends, how they impact the federal organizations at Redstone and how they could influence U.S. reaction to world events and the nation’s future exploration, discovery and technological development.

While the U.S. appears fragmented politically, Dempsey said that even as America maintains its role as pre-eminent global leader, the nation continues to vie with adversaries Russia and China globally. "We all conceive of our futures differently," he said.

"It’s a pretty complicated time in our lives – not only in our personal lives but in our country. We have to make sure we don’t lose control of our emotions when we think of the future."

The U.S. has a number of strategic advantages that help support its global leadership role, Dempsey said. They include being bordered by two oceans and two peaceful neighboring countries, the nation’s energy independence, a robust agricultural sector that can grow all the food needed, a world-class educational system and an excellent transportation system.

"And then we have a political system that at times can seem so corrosive and partisan, and yet is the best in the world." As evidence of that, Dempsey said that of the 94 countries he has visited, in two-thirds of them the population wakes up each morning worried about a military takeover – something U.S. citizens never worry about. Still, America can seem unsettled.

"What we’re experiencing now is probably a little more fractious than before, but just a little," Dempsey said. "There’s always been this sort of competition of ideas. I do think we’re in a society where sometimes these shifts happen and they are unsettling, but sort of like a grandfather clock, they wind down."

Even as technology and communications improvements have allowed the world to globalize on an unprecedented scale, Dempsey said globalization does not change the basic factors that motivate China and Russia to be the chief rivals of the U.S.

Globalization does not change the competition for resources, the history of animosities between peoples, or religions, he said.

"China, for example, has to find the resources to sustain a growing population of about 1.3 to 1.5 billion people," Dempsey said. In that pursuit, China has established itself as a global economic power and to some extent a global military power.

"China has to find a supply chain to meet its birth rate out into the future," he said, and that need is driving Chinese expansionism in the South China Sea, in Africa and in America’s southern hemisphere.

"They are going to protect their supply chains," Dempsey said.

Russia, on the other hand, is undergoing recidivism as it recognizes that all its major indicators are in decline, he said.

"The Russians are extraordinarily concerned about the future," Dempsey said. "Russia feels the need to establish some sphere of influence."

That need expresses itself globally in Russian coercion, its attempts to destabilize the U.S. politically and its efforts to sever the U.S.-Canada relationship and the U.S. relationship with the North Atlantic Treaty Organization (NATO).

Here is where strength in the global relationships the U.S. has built since 1945 with 53 allies and partners comes to bear, Dempsey said, because the rapid adoption of smartphones has made the world a far more connected place at the same time that the increased flow of information and disinformation, as well as the much more intense scrutiny of leaders, has made it harder to lead.

"We care about that because it is the way we have built our economic and our national security policy," he said.

"Global security is threatened by the degradation of associations like NATO and the UN," Dempsey said. "If the world goes bilateral, I think the world is in a lot of trouble."

That’s because there are a number of intractable problems globally that only international cooperation can resolve, he said. Global migration, in which 65 million people are currently displaced, is a top concern.

"What happens when a family is displaced?" he asked. "Well, first the family unit begins to break down, and then education breaks down, and then what steps in to fill that hole? Religion moves in."

Once that happens, the radicalized population that results becomes a security concern for all nations.

While Dempsey said he wasn’t an expert and couldn’t address the fundamentals, he ranks climate change as another problem that can only be solved through global cooperation.

"The future of this little sphere we all cohabitate in, you can’t solve by yourself," he said.

The advance of technologies globally also demands cooperation between nations.

"Technologies like CRISPR and gene editing are very exciting," Dempsey said. " But what happens is, technology always outpaces ethics." Global cooperation is required to police those ethical concerns.

Similar ethical concerns arise with artificial intelligence (AI), which he said gives rise to the specter of false computer generated images of people engaged in faked conversations and other forms of disinformation driven by AI that could disrupt or corrupt governments and the international order.

"I’m not convinced we’re staying up with the ethics of it," Dempsey said.

All of these concerns and more demand a robust global U.S. leadership presence, he said.

"We’ve got to make sure that we never lose sight of the fact that, despite the technology, we still need to relate to each other," Dempsey said. "If you ask me, what is the role of the U.S. in the world today? Unfortunately, we’re it."