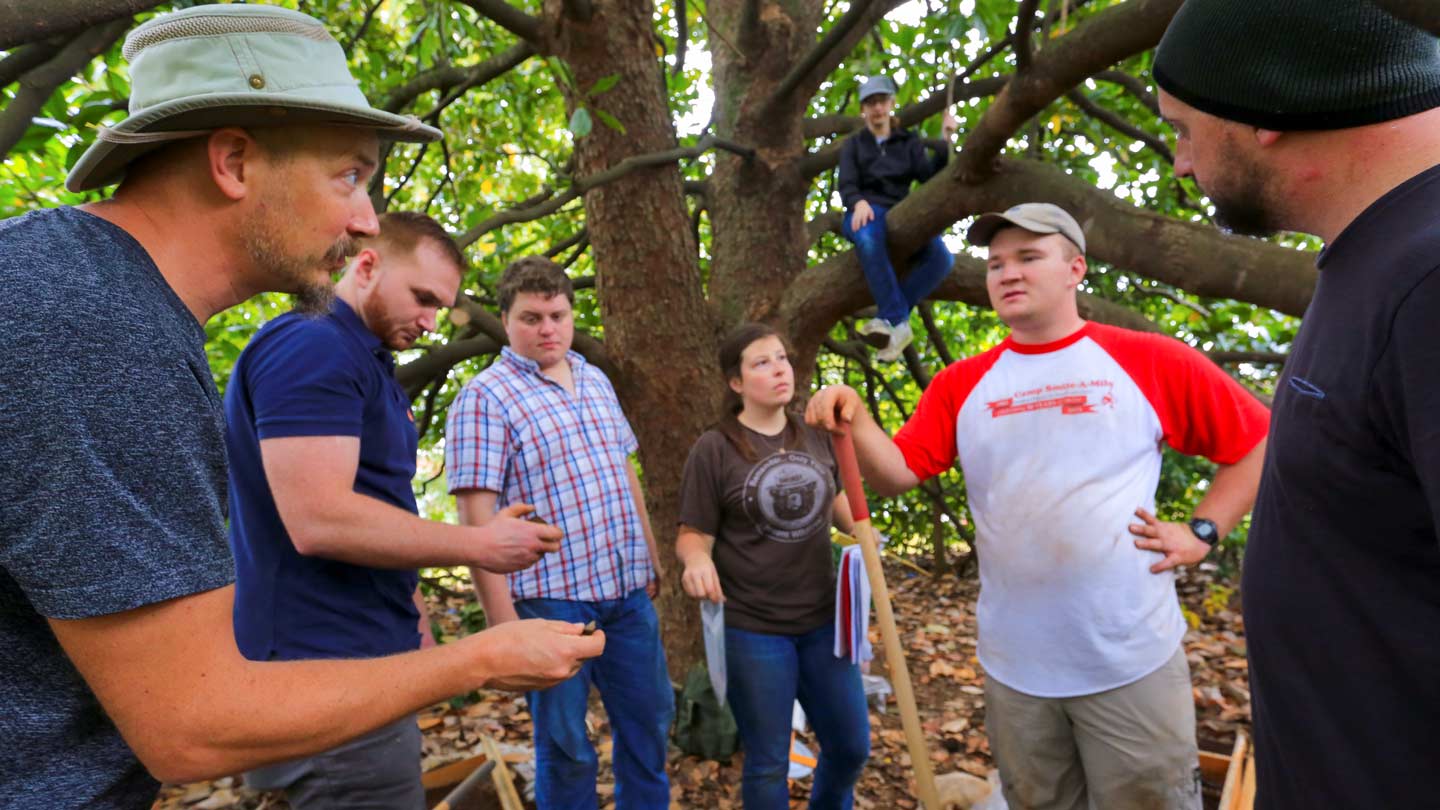 Ben Hoksbergen, left, listens as a student in his historical archaeology course discusses an artifact found on the original site of the Avalon Plantation.

Ben Hoksbergen didn’t know for sure whether the students in his historical archaeology course at The University of Alabama in Huntsville (UAH) would unearth evidence of the plantation that had once spanned half of campus. But while he had been prepared for them to be disappointed about not finding anything, he had never once considered they might be skeptical if they did.

"The first day we did the field survey, I was half-convinced he’d planted the stuff!" says history major Mariah Wilkinson. "And then when we started doing shovel testing and finding more, I thought he still might have put it there." Indeed, it was only after the number of recovered artifacts started climbing into the thousands that she began to understand the herculean amount of work such a prank would have entailed. "I realized there’s no way anyone would put that much effort into planting it," she laughs. 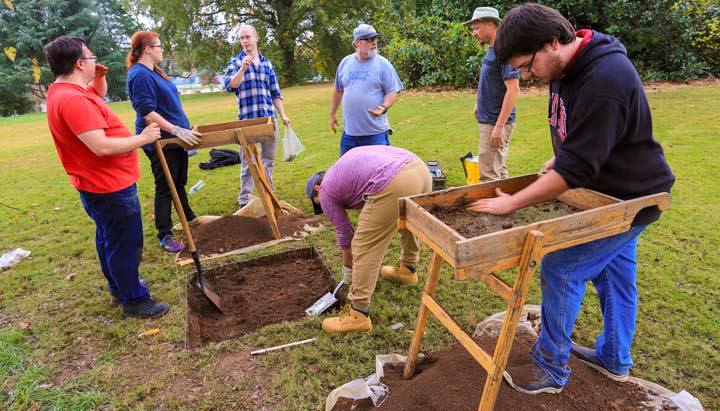 Students in the class turned up thousands of artifacts belonging to families who had lived on the site beginning in the 1820s.

This fall, 23 students took part in the course, which introduces the intellectual and practical concepts of historical archaeology and uses elements of research, fieldwork, analysis, and interpretation to explore and recreate the documented and undocumented past. "I’ve taught it twice before, and this was our biggest class so far," says Hoksbergen, a lecturer in the Department of History who is also a full-time cultural resource manager for the U.S. Army’s Redstone Arsenal and serves as the president of the Alabama Archaeological Society.

Unlike in previous years, however, he decided to forgo excavating early-1800s home sites on the Arsenal and instead focus on Avalon Plantation, a large slaveholding estate that he knew from U.S. Geological Survey maps had once been located on the UAH campus. "For the sake of time and convenience, and due to the large class size, I decided to try having a field school right on campus," he says. "And it turned out to be a fortuitous decision! The first site we discovered was so complex and significant that we decided to spend the whole semester on it."

Avalon Plantation was initially established by Lewellen Jones, a Revolutionary War veteran and influential planter who acquired the land in 1820 as part of a debt settlement. "Based on our historical research and the material culture we uncovered, the plantation incorporated the whole northern half of campus," says Hoksbergen. When Jones died by suicide a few weeks later, his son Alexander took over the estate’s management, becoming the fourth-largest slaveholder in the county by 1850. "By all accounts, Alexander was an eccentric," he says. "He lived alone and did all of his business through an agent. He was also said to buy slaves, but never sold any." With his passing in 1867, Alexander’s nephew Alexander Spotswood "Spot" Perkins inherited the plantation, but his own death just two years later precipitated its sale to well-known suffragettes James and Priscilla Drake.

I decided to try having a field school right on campus…and it turned out to be a fortuitous decision!

"The Drakes began parceling out the plantation and facilitated the sale of several of the tracts to former Jones slaves," says Hoksbergen. They also may have influenced William Hooper Councill, a former slave, to establish a freedman’s school on the property for the local black community. "Councill’s school was eventually moved to Normal, Alabama, where it was the precursor of Alabama A&M University," he says. As for the remainder of the property, it passed through a series of owners, including the Crawford and the Swartz families, before being sold to the Huntsville City Board of Education. "That land was ultimately transferred to University Center of Huntsville, and in 1966, it was renamed The University of Alabama in Huntsville."

To ensure that the excavation of such a valuable site would be done properly, Hoksbergen spent the first half of the semester providing the students with a strong foundation in historical archaeology. "I tried to use examples of sites common to Northern Alabama – from Cherokee home sites and early settler cabins to plantations and blacksmith shops – to make it as relevant as possible," he says. That was followed by a field trip to the Heritage Room and Archives at the Huntsville-Madison County Public Library and the Madison County Courthouse. "I wanted them to get a sense of the kind of historical records, like census records and deeds, that archeologists use to figure out land ownership."

Only then was it time for the students to get their hands dirty – literally. "I knew there were artifacts on the surface, so we lined up and did transects across a nice, level, two-acre hilltop behind Roberts Hall," he says. "When anyone found something, we put a flag down and then we picked the artifact up and recorded the coordinates." The majority revealed itself to be dishware, which Hoksbergen says is both "very diagnostic for historical archaeology" and "looks like a bunch of junk to the untrained eye," which explains how it can sit exposed and undisturbed for more than 200 years.

Once those artifacts were mapped, the students proceeded to divide the entire site into 10-meter squares using a transit – a traditional surveying tool that measures angles horizontally and vertically – and then shovel test each grid. "Shovel testing is a standard technique where we dig a round posthole 30 cm in diameter down to the subsoil and then use a quarter-inch screen to push the loose soil through and look for artifacts," he says. "We did it old school because it’s low tech and easy for the students to learn, but we also discussed the high-tech tools used in historical archaeology." 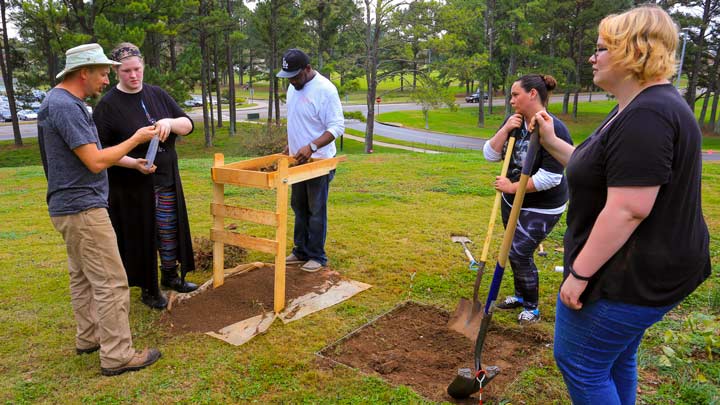 Hoksbergen taught the students how to use traditional archaeological tools, but also shared some of the more high-tech improvements to the field.

In one class, for example, Hoksbergen invited Dr. Duke Beasley, a geophysical investigator with Tennessee Valley Archaeological Research, to give a guest lecture on the subject. "Duke is an expert in remote-sensing technology, which is really anything that helps determine what’s underneath the ground without penetrating it," he says. "He conducted a ground-penetrating radar survey that really showed the students the progression of the technology. We were also able to detect radar anomalies consistent with graves in an area we had identified as a slave cemetery based on map analysis, so I hope that will be the site of a future project."

Fortunately, the students’ shovel testing of the Avalon site had yielded plenty of information about where to concentrate their efforts. They ended up selecting three areas to lay in excavation units, square holes one meter in width and length, which they then dug up in 10 cm layers at a time. "For each of the layers, we documented how deep it was, what we found, and what the soil color and texture was since you can learn a lot from dirt," says Hoksbergen. "And then we kept taking it down until we stopped finding artifacts."

Once everything was unearthed, the final portion of the class was dedicated to compiling a final report of the type recommended by the Alabama Historical Commission. That, in turn, will form the foundation of an official site report that Hoksbergen is planning to submit. "The hook is sunk now – I’m really interested in this site and the families," he says. And he’s not the only one. History major Jonathan Morse has also gained a greater appreciation for the campus’ prior inhabitants. "I didn’t know how detailed you could get and all the technology you could use, but you can learn so much by digging stuff up," he says. "I think about that when I throw things away now, how interesting it would be if someone excavated my house a couple of hundred years from now."

That, of course, was Hoksbergen’s hope all along, not just that his students would learn what historical archaeology really is, but that – like him – they’d be hooked once they did. "When they start they have this concept of archaeology from pop culture, but it’s not just hacking through the forest and finding ancient ruins and putting those on the map," he says. "So I think it was eye opening when they stepped out the back door of UAH’s history building to find a significant, relatively intact plantation site right there on the ground."