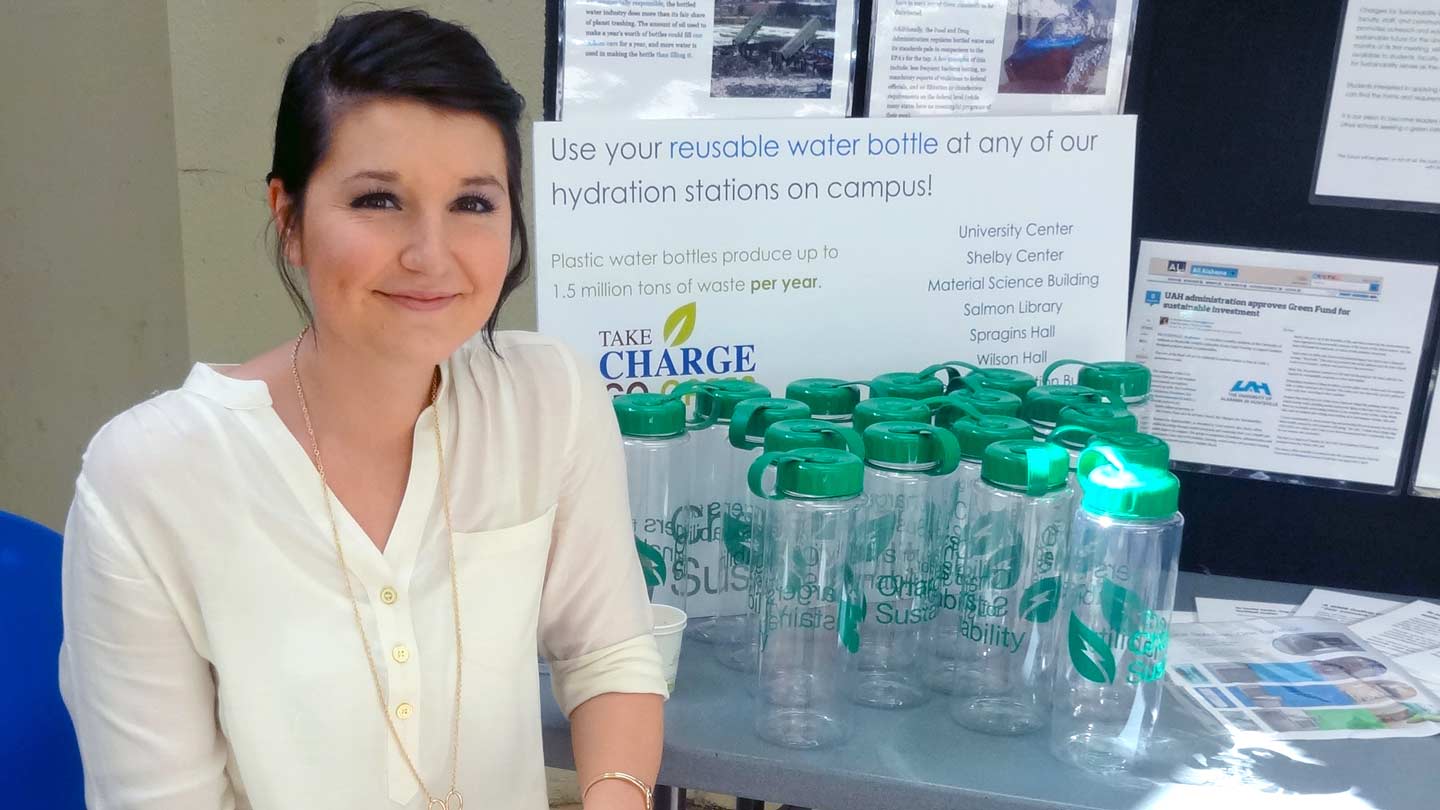 The Ban the Bottle initiative, which received support from the Green Fund, challenged UAH students to reduce water waste.

What do a composting facility, a solar-powered charging station, and a net-zero-energy lab have in common? They're all sustainability initiatives proposed by students at The University of Alabama in Huntsville (UAH) in hopes of receiving Green Fund support.

"We created the Green Fund in 2013 to give students the financial resources to pursue environmental projects on campus," says Haley Hix, UAH's Sustainability Coordinator and Director of the Chargers for Sustainability. "And since then, we've received a number of exciting proposals for improving our community."

To apply to the Green Fund, students must first ensure their project falls into one of two categories: it educates the UAH community about sustainability, or it makes the campus more environmentally friendly. They must also submit a proposal that includes a description of the project, a budget summary, a timeline, and at least one letter of support from a faculty or staff advisor.

We created the Green Fund in 2013 to give students the financial resources to pursue environmental projects on campus.

All proposals are then reviewed by the Green Fund Committee, which is made up of roughly a dozen students and faculty members who each serve a one-year term. Anyone can apply to join the committee, but members must be willing to attend two meetings a year to choose new projects and evaluate the progress of ongoing ones.

Last year, says Hix, the Green Fund Committee accepted two proposals. The first was a Ban the Bottle initiative that challenged UAH students to reduce their reliance on bottled water. "They asked for a modest grant to purchase and pass out reusable water bottles and to host an on-campus event to educate the community about the amount of waste associated with bottled water."

The second was a sustainable natural fertilizer initiative to brew organic compost tea for UAH's Community Garden. Submitted by senior biology major Michael Marshall, who also serves as the garden's director, the proposal received $10,286 to cover materials needed for the solar-power and rainwater-fueled composting system.

"Michael's proposal was exactly what I envisioned when we started the Green Fund," says Hix. "It meets both criteria – it educates students about sustainable gardening practices through hands-on experience and it improves the campus environment by creating a natural fertilizer that can be used by our grounds crew." 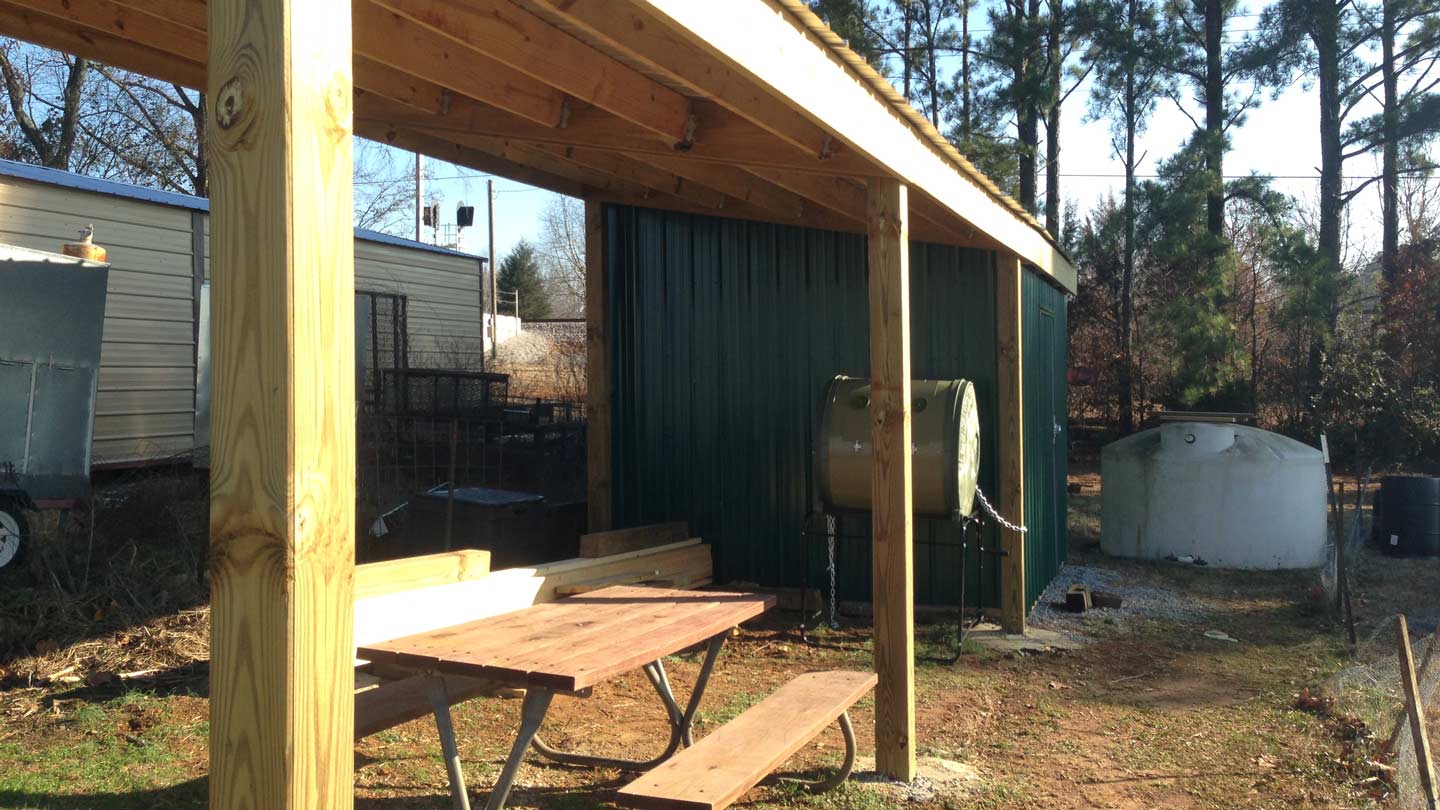 The UAH Community Garden's sustainable natural fertilizer initiative was one of the first proposals to be accepted by the Green Fund Committee.

This year, Hix hopes the Green Fund Committee will fund several more – and more ambitious – proposals. "In terms of student-led sustainability initiatives, we're already far ahead of other universities in Alabama," she says. "But "I'd like to see some projects that have a bigger impact and a greater return on investment."

Two are currently under consideration. The first is adding a solar-powered component to the charging stations used for the campus' golf carts. "Josh Pennington, a business student, came up with the idea," she says. "The Alabama Center for Sustainable Energy is helping him with the proposal, and I'm optimistic it will be accepted."

The second is the creation of a net-zero-energy lab. "A group of honors students wants to retrofit a building on campus with renewable energy sources to take it off the grid," says Hix. "Once it's done, they hope to design a course around it that will teach other students about sustainability."

It's a project of unprecedented scope, likely requiring corporate sponsors to match the Green Fund monies provided. But that's the direction Hix says she envisioned all along for the campus' sustainability efforts. "Going forward, I hope we can partner more with the university and the community to fund these large-scale projects."

Until then, of course, the Green Fund will remain the primary source of funding for student-led sustainability initiatives. And for those looking to submit a proposal for funding this spring, there's no time to waste: completed applications are due by Feb. 1. "Big or small," says Hix, "we're always looking for the next great idea."