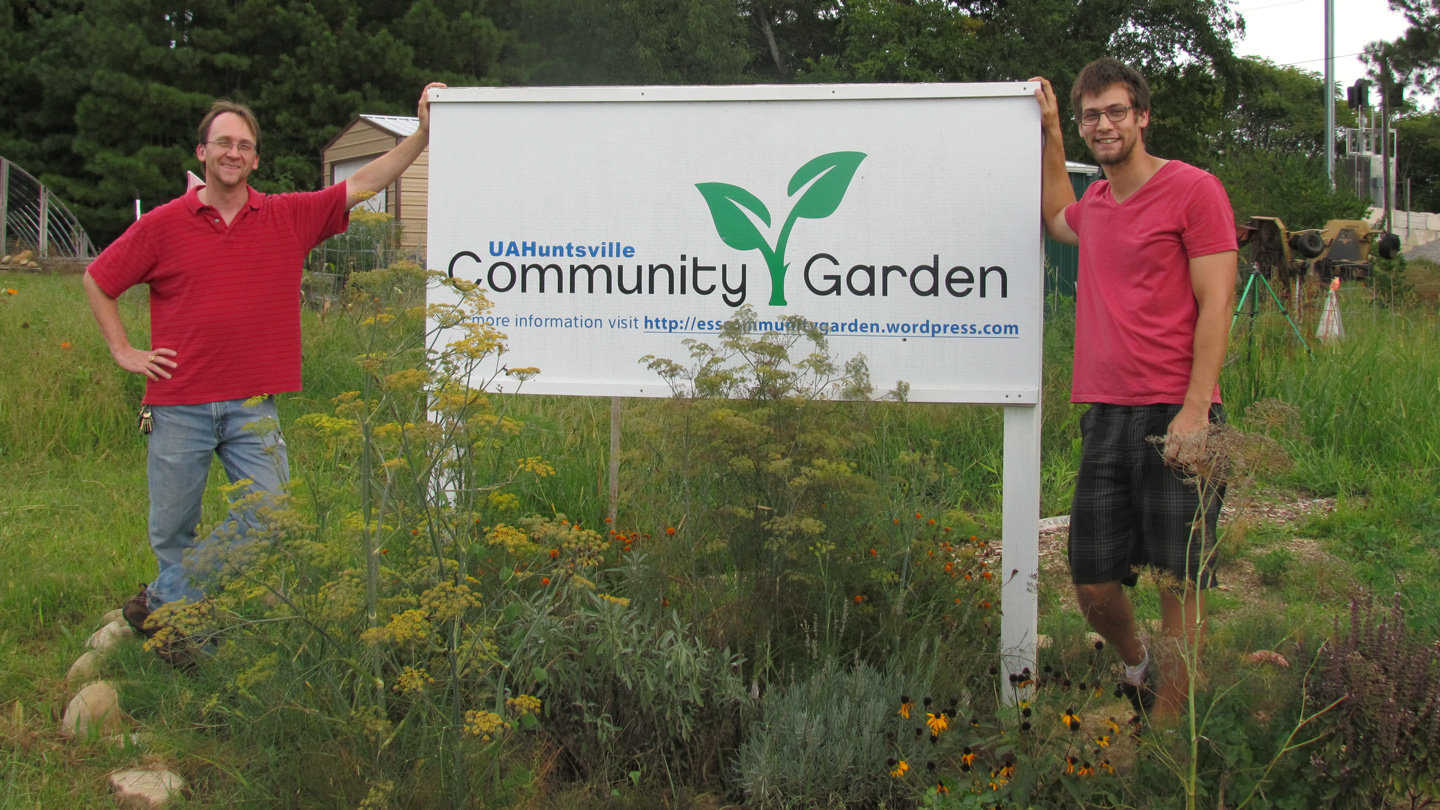 Dr. Leland Cseke and Michael Marshall applied for and received a grant for $10,286 to fund their Sustainable Natural Fertilizer Initiative.

Sweet tea might be a favorite among Southerners, but among gardeners, it's compost tea. An all-natural alternative to commercial fertilizers, compost tea is safer for the environment and yields healthier, more productive plants. And that's exactly why Michael Marshall plans to brew his own.

Marshall is a senior biology major at The University of Alabama in Huntsville (UAH). He's also the manager of the university's community garden, founded in 2011 to provide UAH students with a space to practice sustainable gardening techniques and to gain an understanding of plant and soil biology. So when it was discovered last semester that the garden's soil was lacking in necessary nutrients, it fell to him to come up with a solution.

For help, Marshall turned to Dr. Leland Cseke, an assistant professor in the Department of Biological Sciences and the garden's faculty advisor. And together they came up with the Sustainable Natural Fertilizer Initiative, a solar power and rainwater fueled composting system that would allow students to brew their own compost tea for use as fertilizer.

The only issue was how to pay for it. The initiative called for a 25-foot extension of the existing garden shelter complete with a rainwater collection system and solar panels, in addition to compost bins and tumblers, air pumps, and more. It all added up to thousands of dollars - far more money than the garden's modest budget could accommodate.

If I get more people involved, it will open their eyes to being more proactive and protecting the environment for the future.

Enter the Green Fund. Overseen by the Chargers for Sustainability, a student-run umbrella organization for sustainable initiatives on campus, the Green Fund was founded in 2013 to support "green" projects and events on campus. That made the pair's initiative a perfect candidate, and this past July, Marshall submitted an application asking for the $10,286 to cover the project.

"I started the fund hoping some enthusiastic students would initiate environmental projects that they want to see on campus, and this was exactly the kind of proposal I was waiting on," says Haley Hix, UAH's Sustainability Coordinator. "It promotes our community garden and incorporates sustainable practices that have the potential for broader application."

Needless to say the application was approved, and in August, Marshall received the funds he needed to launch the initiative. The first step, he says, will be to build the shelter extension. Once that's complete, the composting equipment will be purchased and set up, followed by the installation of solar panels. And by the summer of 2015, the garden should be ably producing its own compost tea.

Along the way, the pair plans to enlist the skills of other students whose interests and expertise overlap with the project, whether it's biology majors helping with the composting setup or engineering majors assisting with the installation of the solar units. "There's a big educational component," says Dr. Cseke, who already uses the garden to provide hands-on experience to students in his People, Plants, and Environment class.

They also hope to expand interest beyond the classroom. It shouldn't be hard - there are already several groups invested in the project's success. "We have people lined up that would like to present compost workshops and related events at UAH," he says. "This includes Alan Booker, an engineer at Adtran, who wants to share his expertise in composting and compost tea brewing." 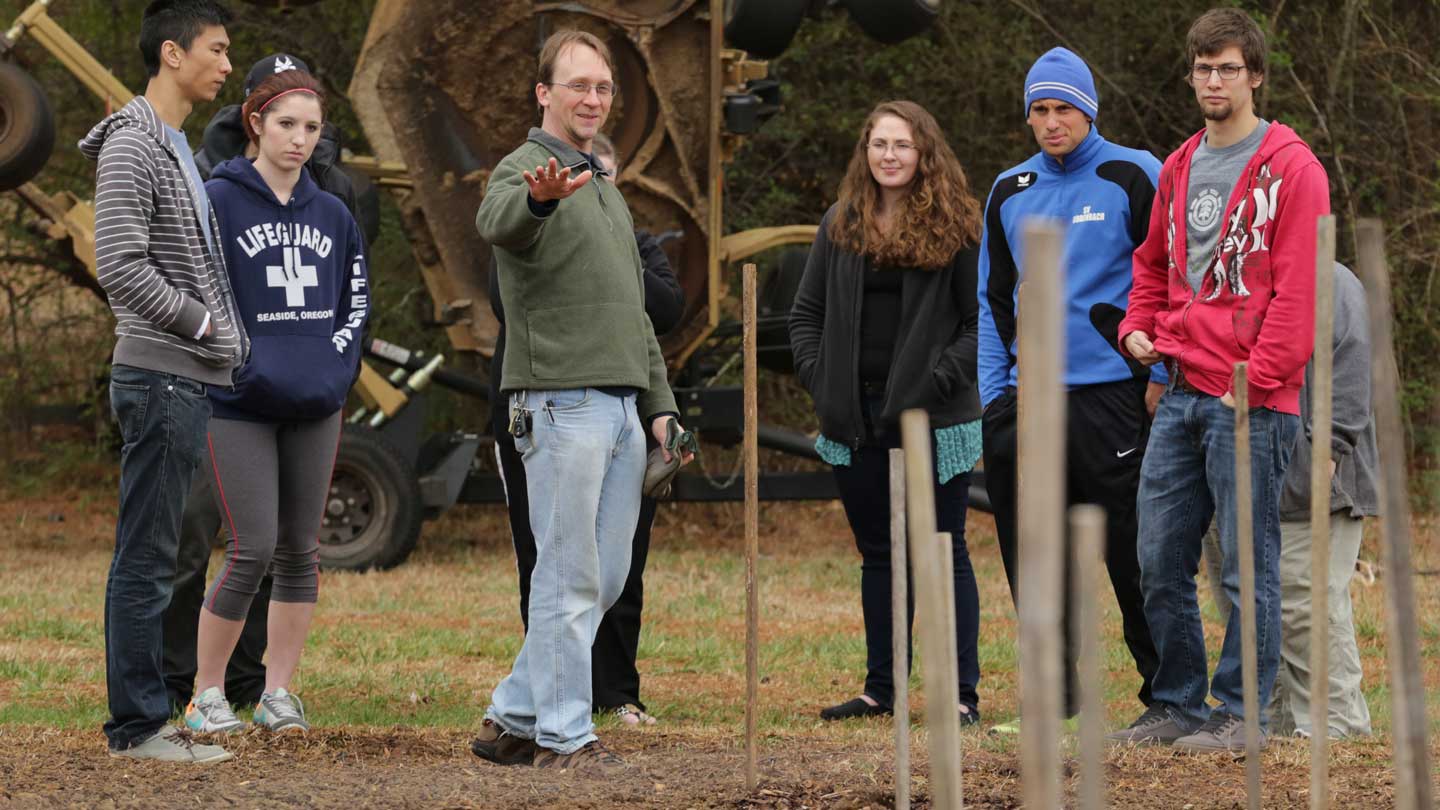 The garden serves as an outdoor setting for Dr. Cseke’s People, Plants, and Environment class.

And closer to home is Robert Redmon, Director of Grounds Management at UAH. He has already agreed to provide the plant and grass clippings needed to create the compost, and as a longtime supporter of sustainable initiatives , he's committed to supplementing the commercial fertilizers used on campus as the tea becomes available. "We're going to start with 100 gallons a week but that could easily get ramped up to 100 gallons a day," says Dr. Cseke of meeting the demand.

It's a grand plan, and one that will require both Marshall and Dr. Cseke to dedicate even more time to their initiative. But given what's at stake, neither one is complaining. "If I get more people involved, it will open their eyes to being more proactive and protecting the environment for the future," says Marshall. Adds Dr. Cseke, "It's the right thing to do."