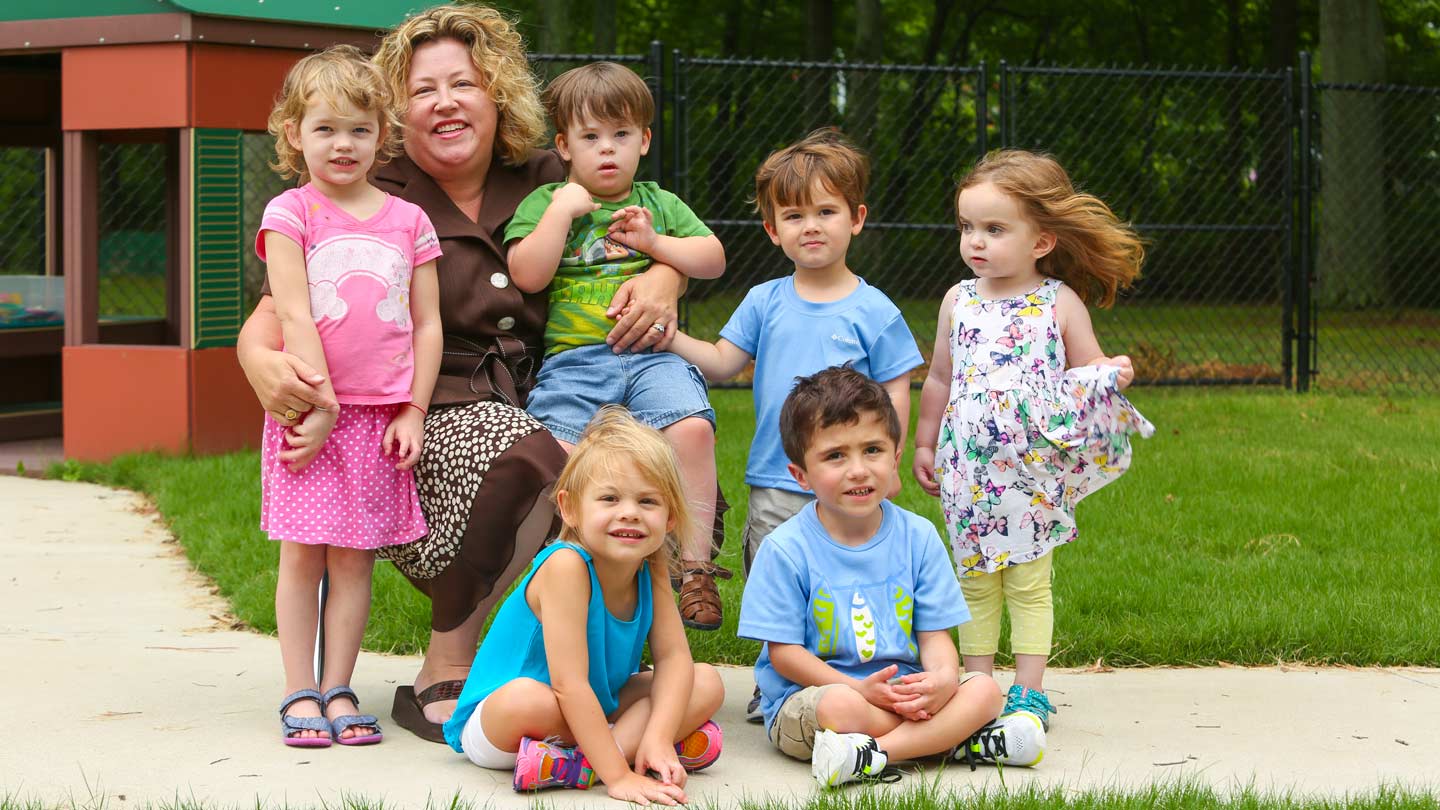 Deana P. Aumalis, the new Director of the UAH Rise School and some of her students enjoy an afternoon outside.

Deana Preston Aumalis ('89 BA Education) was recently named Director of The University of Alabama in Huntsville (UAH) Rise School. Rise became a formal organization under the direction of UAH's College of Education in 2014.

Quick said the purpose of the UAH Rise School is to provide the highest quality early childhood education services to children with developmental disabilities and children without disabilities.

For the UAH alumna who has been working with special needs children for more than 25 years, the director's position at Rise School is her dream job. "I was so excited to hear that the Rise model was coming to Huntsville," said Aumalis. "It would be a career dream to teach at the school - especially with it being local. When I heard about the opening for a director, I knew I had to apply. Being selected for the position was truly a blessing from God." 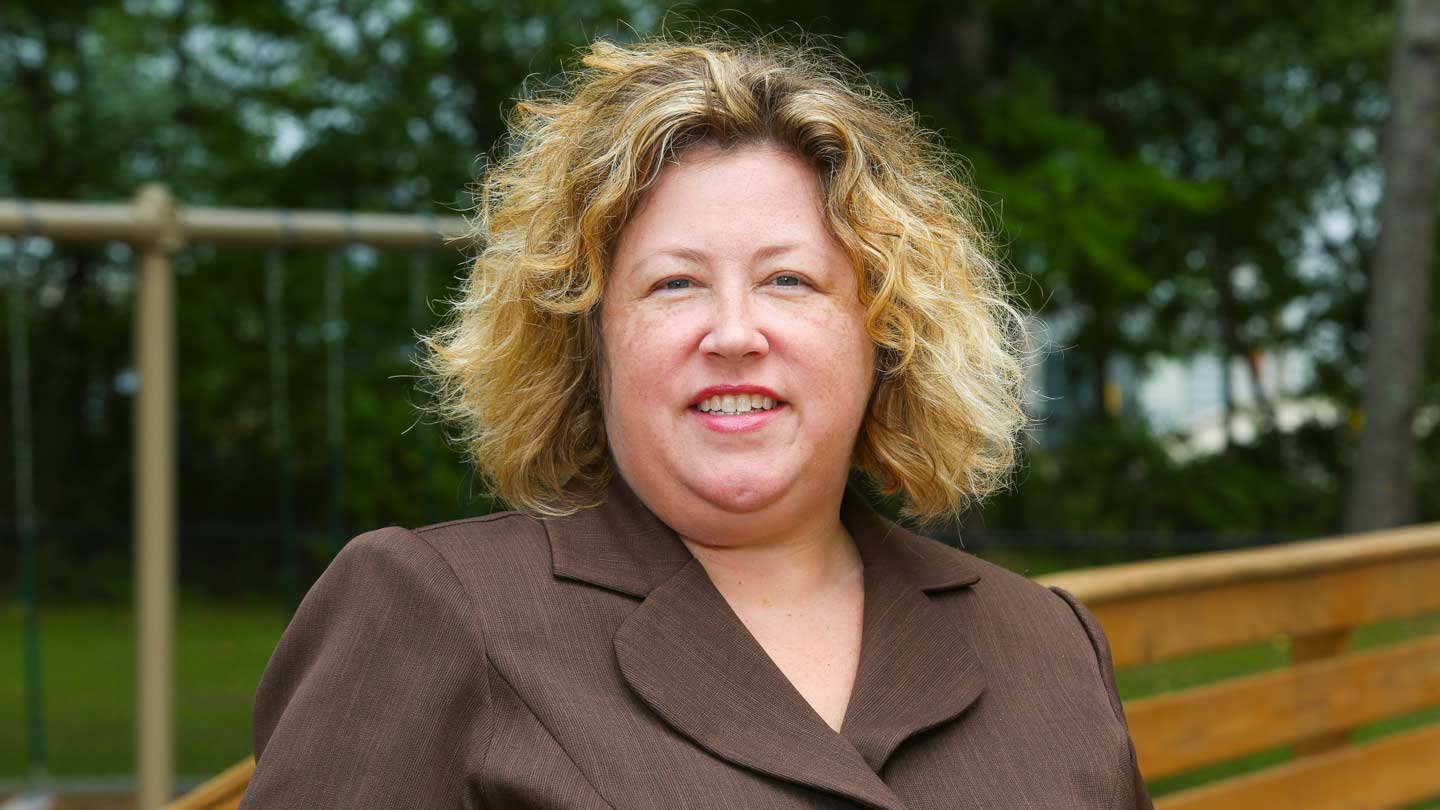 Before her formal teaching career began, Aumalis was fortunate enough to work as a graduate assistant under the supervision of distinguished teacher and contributor to the special education field, Dr. Martha Cook, at the Rise School located on the The University of Alabama (UA) Tuscaloosa campus. "After graduation I taught a pre-school special education class, a classroom for students with autism in kindergarten through second grade, and I was a Resource Specialist (Central Office position) for the Preschool and Autism classrooms in Madison County.

Aumalis previously worked for the Madison County School System for 11 years. She took a break from teaching in 2002, to be a stay-at-home mom with her two children, Arnie, and Silvie. In 2009, Aumalis resumed her career at the Madison City School System as a developmental preschool teacher at Mill Creek Elementary.

Returning to the UAH campus brings fond memories of her academic and volunteer work as a student and member of the Delta Zeta sorority. Aumalis volunteered primarily with deaf and hearing impaired youngsters. "I learned sign language and really enjoyed my work with the children. I decided before graduating from UAH that I would go on to attend graduate school and major in Early Childhood Special Education."

Aumalis is excited about the 2015-16 school year at Rise. An Open House event is scheduled for Monday, Aug. 10, from 4 p.m., to 6 p.m. "We're going to be really busy in the fall. Plans include opening our fourth classroom, adding a new teacher and LPN/classroom assistant to our current staff. We will enroll children from ages 12 months to five years old, and have close to a 50/50 ratio in each room. Additionally, several instructional workshops have been planned for teachers this fall. Aumalis will represent the UAH Rise School in October, when she presents the seminar "Assistive Technology in the Early Childhood Classroom," at The 2015 Alabama Assistive Technology Expo & Conference," in Auburn, AL.

"One of the biggest challenges I see is getting technology into our classrooms," she said. "I plan to access some items through United Cerebral Palsy's Technology Assistance Special Consumers Program, which has an equipment loan component. But, our biggest need right now is to get the word out that we have openings for typically developing children for the 2015-16 school year. We currently have a wait list for children with special needs." Aumalis said anyone interested in touring Rise School can contact her at 256.489.7512.

She is married to Ansis "Ed" Aumalis, a software engineer at Davidson Technologies. The Aumalis family resides in Madison, AL.

The Rise School in Tuscaloosa originated at The University of Alabama in the 1970s. Since then, seven schools have opened across the nation implementing the unique proven model of an integrated environment. The Rise School located on the UAH campus is a non-profit organization, that provides educational services to children with developmental disabilities and children without disabilities.