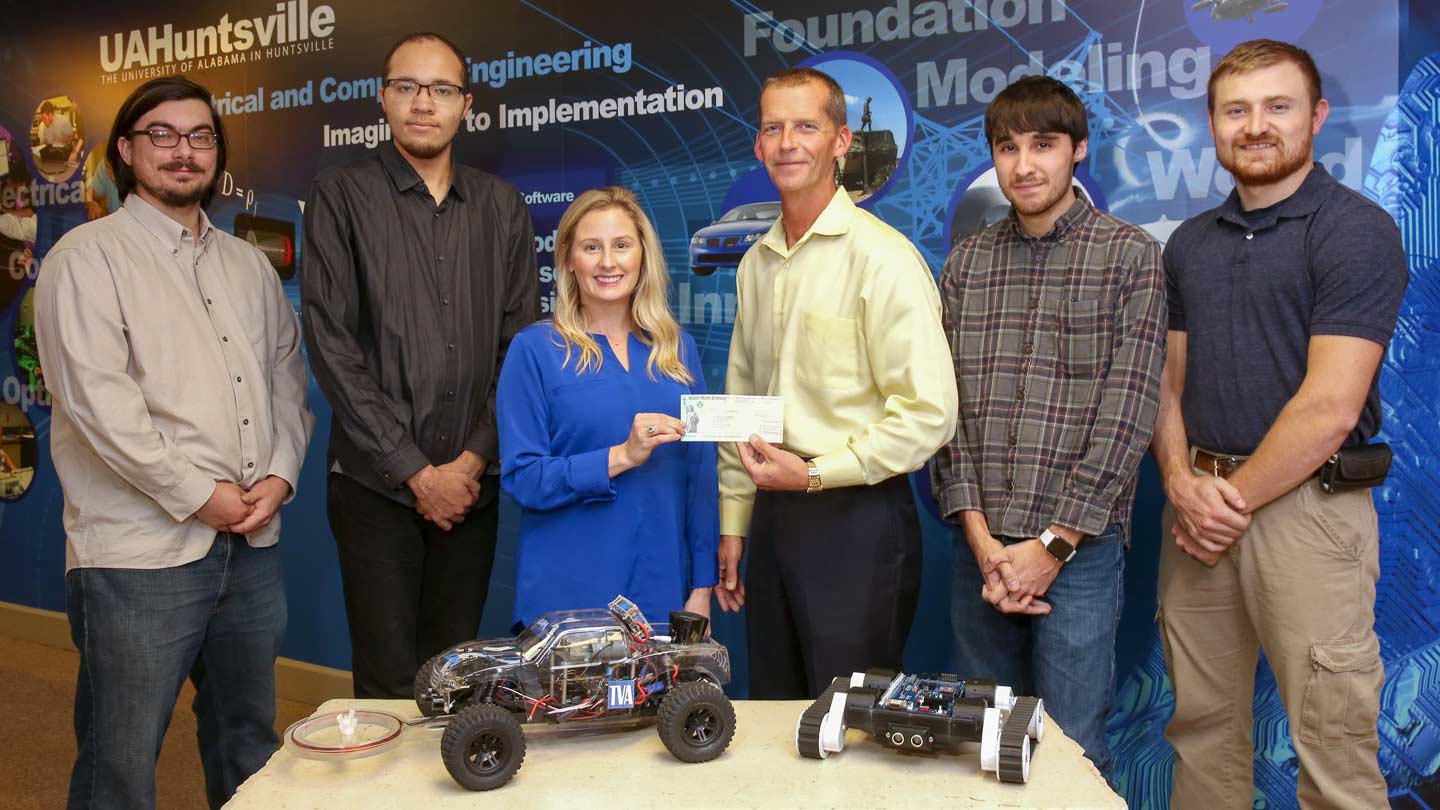 Students in the Electrical Engineering Senior Design Course at The University of Alabama in Huntsville (UAH) are challenged to design, construct, test, and evaluate technical projects that demonstrate their grasp of the theory, knowledge, and skills they’ve accrued over their academic career as majors in the Department of Electrical and Computer Engineering. Throughout the process, they must also address any economic, ethical, legal, safety, and manufacturing constraints while at the same time ensuring that the project is both socially beneficial and environmentally friendly.

"The students in the course are evaluated on their engineering design accomplishments based on their research abilities, their problem-solving and decision-making skills, their technical and design skills, their oral and written communications abilities, how well they function as a team, and other project deliverables, all of which make complex design problems/projects supported by local industry crucial to the process," says Dennis Hite, one of the course’s instructors. "The projects are then showcased at events such as UAH’s Discovery Days for prospective students and the College of Engineering’s Open House to generate interest in the science, technology, engineering, and math, or STEM, fields."

Because of their complexity, several of these projects – including a metal detecting vehicle and a rover with a robotic arm – are ongoing, spanning successive cohorts of seniors. This year’s class opted to take them on once more, with Ethan Swinea, Justin Oakley, Stacy Coggin, and Kyle Kennedy joining forces as Team S.O.C.K. to upgrade the metal detecting vehicle, and Charles Box, David Haynes, Aaron Mashburn, and Alex Mitchell teaming up as Next Step to redesign the rover.

"The problems with the existing vehicle design included multiple battery sources, a metal detection system that provided an audible notification that was not very noticeable, and a restricted range due to live-video streaming capabilities requiring connection to a local Wi-Fi network," says Team S.O.C.K.’s Swinea. "All of these problems provided motivation to initiate an upgrade and improve the vehicle’s capabilities."

As for the rover, the team suspected that the iterations it had undergone over the years had negatively affected operating conditions for the end user. "The control scheme for the rover involved the use of two Android smartphones running two separate mobile applications that controlled the arm and drive train," explains Next Step’s Box. "The control hardware was in a similar state. A relatively simple rover design was controlled by three microcontrollers, which wasted a vast amount processing power and usable space." Added to the team’s other concerns, like faulty wiring and a bulky frame, and it was clear the rover was suffering from "overall awkward operations of the system and a negative visual appearance."

To fix their respective projects, the team began by breaking the workload into individual tasks, from improving the existing design, hardware, and software to testing and troubleshooting their improvements. And to fund their respective projects, the team relied on the support of community partners like Dynetics and the Tennessee Valley Authority, which recently unveiled a new vision focused on service to the region.

"TVA recognizes that STEM education is critical to a brighter future in key fields that are core to our mission – energy, environment and economic development," says Lauren Vandiver, TVA’s Government Relations Program Manager, adding that these particular projects have an added appeal because of their intended use in a variety of outreach efforts. "We are pleased to partner with the Department of Electrical and Computer Engineering to advance educational opportunities for the future workforce and build a pipeline of employees for TVA and other businesses in the Valley."

In the end, both teams proved worthy of the challenge. Team S.O.C.K. introduced a new metal detecting circuit that both lights up and emits an audible notification when metal is detected, in addition to replacing the controller with a Bluetooth version with a device clip to hold the operator’s phone. And Next Step was able to make significant improvements in its ease of operation, consolidation of parts, increased efficiency of hardware and software, and modularity. Not only will this allow for "potential additions to the rover’s features and function by future seniors," says Box, but it also ensures that both projects will be able to successfully execute their mission of "inspiring students and young people to pursue a science or engineering education from UAH."