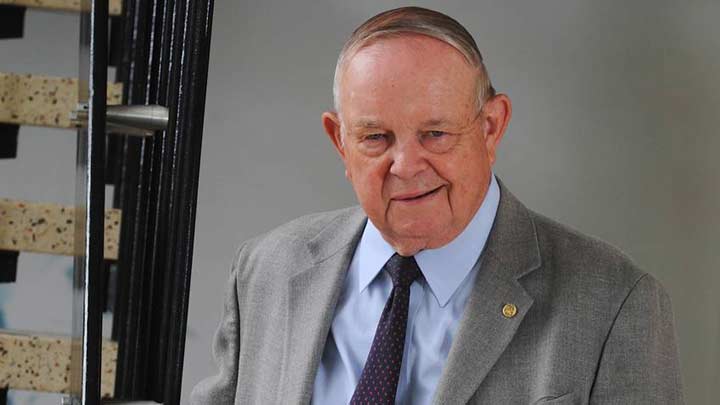 A "Celebration of Life," Service for Dr. Richard "Dick" Rhoades, Principal Research Engineer (VII, S1), and former Director of The University of Alabama in Huntsville (UAH) Research Institute. Rhoades died at his residence on Thursday, Sept. 1.

The service will be Friday, Sept. 16, from 3:30 p.m., to 6:30 p.m., at the Tom Bevill Center on the UAH campus, located at 550 Sparkman Drive. The UAH community is encouraged to attend. Rhoades is survived by his wife of 49 years, Dale Turner Rhoades; daughters Lawren Paul (Rodney) of Huntsville, Elizabeth "Liz" Rhoades (Tobias Baumgart) of Swarthmore, PA, and Lee Sugg (Wes) of Charlotte, NC; seven grandchildren: and two great-grandchildren.

A native of Northampton, MA, Rhoades was commissioned into the U.S. Army as a Second Lieutenant, and served as an Ordnance Officer until 1965. He then became a civilian propulsion research engineer and technology program manager. He served as Chief Operating Officer of the Aviation and Missile Research, Development and Engineering Center (AMRDEC), focusing on strategic and business planning, personnel development, and customer relations issues. Rhoades was also a teacher of AMRDEC employees and to UAH graduate students.

In 1997, Rhoades became Director of the UAH Werner Von Braun Research Institute (VBRI) Institute and held dual faculty appointments in the Colleges of Engineering and Administrative Science as Professor of Management in Engineering. In 2013, he stepped down to become the Principal Research Engineer of the VBRI. Additionally, Rhoades was a Research Professor of Management and taught courses in the MBA program. He published numerous articles on propulsion and management topics and held two patents on propulsion inventions.

Rhoades was an active member in military and community organizations. He was a member of the First United Methodist Church, and Rotary Club. He was a longtime usher for the Broadway Theater League and Theater Huntsville. Rhoades also enjoyed stamp collecting, reading, golfing and gardening.

A private burial for Rhoades will be held in Arlington National Cemetery in Arlington, VA. The family has asked that donations be made to the Dr. Richard "Dick" Rhoades Memorial Fund, 316A Shelbie King Hall, Huntsville, AL 35899.