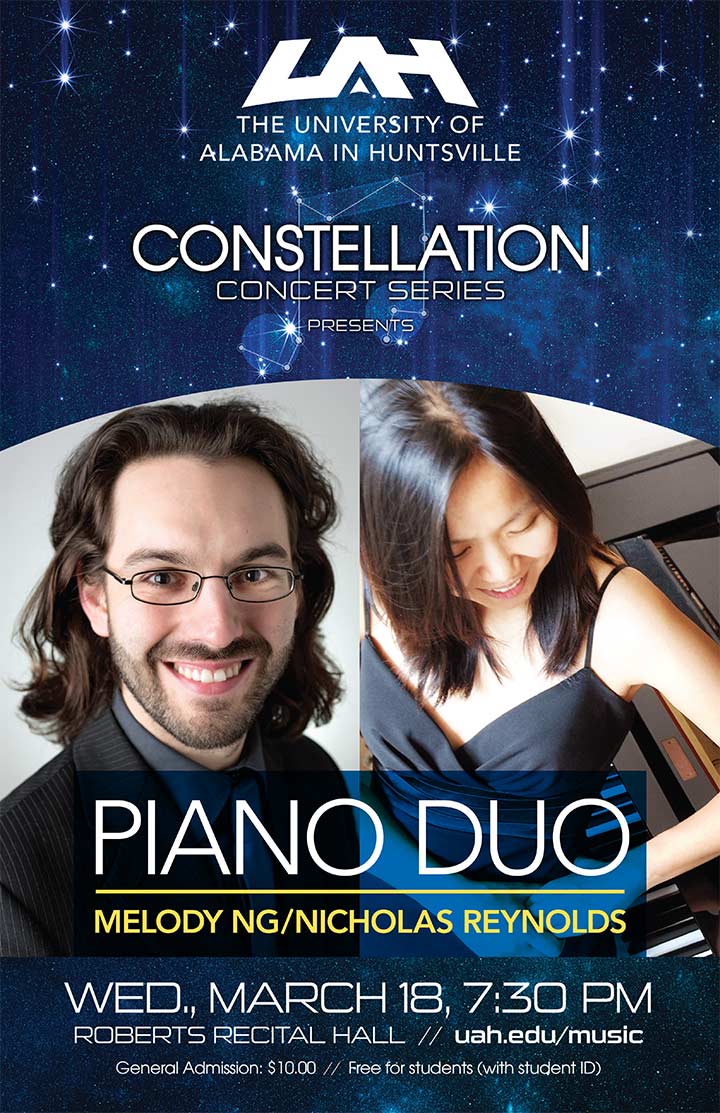 Award-winning pianists Dr. Melody Ng and Dr. Nicholas Reynolds will join forces for a piano duo concert at 7:30 p.m. on Wednesday, March 18, in the newly renovated Roberts Recital Hall. The concert, which is part of the Constellation Concert Series hosted by The University of Alabama in Huntsville (UAH), will feature a repertoire for two pianos and piano four-hands by Franz Schubert, Dmitri Shostakovich, and Astor Piazzolla.

Dr. Nicholas Reynolds serves as the assistant professor of music and collaborative pianist at DePauw University in Indiana, and is on faculty at the Blue Lake Fine Arts Camp in Michigan and the Austin Chamber Music Center in Texas. He is co-founder and co-director of Pianist of the Americas, an annual music festival founded in Portland, Oregon in 2011. In addition to numerous solo, chamber, and concerto appearances, Dr. Reynolds is a prize winner at the Los Angeles International Liszt Competition, the San Francisco Young Artist Competition, the Mid-Texas Symphony Young Artist Competition and the Sidney M. Wright Piano Accompanying Competition.

Originally from Portland, Oregon, Dr. Reynolds received his Doctorate of Musical Arts in piano performance and a graduate certificate in arts and cultural management and entrepreneurship from the University of Texas at Austin. He completed his Master of Music degree from the San Francisco Conservatory of Music, where he was awarded the Piano Department Award, and he obtained his Bachelor of Music degree from the University of Nebraska–Lincoln as part of the Honors Program. His primary teachers include Anton Nel, Mack McCray, Paul Barnes and Shirley Brendlinger.