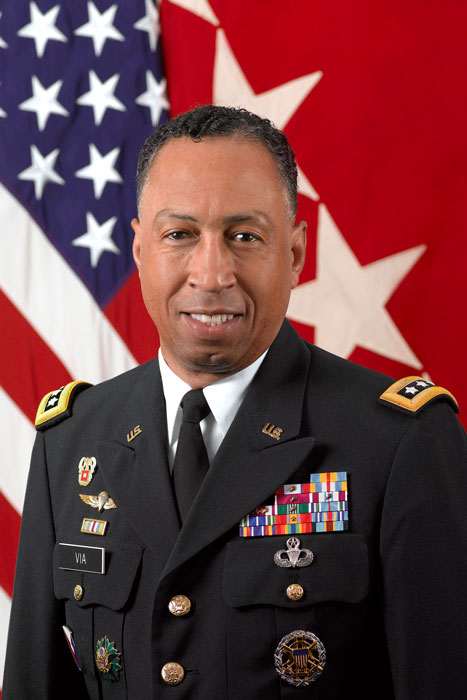 HUNTSVILLE, ALA. (April 14, 2014) - General Dennis L. Via, Commander of the U.S. Army Materiel Command on Redstone Arsenal, is scheduled to deliver the University of Alabama in Huntsville (UAH) commencement address on Sunday, May 4. The ceremony begins at 2 p.m., and will be held in the Von Braun Center Propst Arena in downtown Huntsville.

UAH is expected to award more than 800 diplomas at its spring graduation ceremony - 578 bachelor's degrees, 197 master's degrees and 27 doctoral degrees. General Via will be awarded an honorary doctorate from UAH during the ceremony.

The U.S. Army Materiel Command (AMC) is the Army's premier provider of materiel readiness to ensure dominant land force capability for the U.S. Warfighter and our allies.

General Via's prior assignment was as AMC's Deputy Commanding General. He deployed to Southwest Asia in October 2011 as the Commander, AMC Responsible Reset Task Force with the mission of leading the strategic integration of the Materiel Enterprise for the Retrograde of equipment and materiel out of Iraq at the conclusion of Operation New Dawn. Prior to that, he served as Director for Command, Control, Communications and Computer Systems, J-6, The Joint Staff, Washington, D.C.

General Via is married to the former Linda A. Brown of Warsaw, Va. The Via's have two sons, Brian and Bradley.

There will be a reception immediately following the ceremony in the East Hall of the Von Braun Center. If you have specific questions about the UAH spring commencement ceremony, please call Peggy Bower at 256.824.6337 or email her at bowerp@uah.edu.