The Kathy Chan Display at the Salmon Library

Three unique artistic creations by internationally-known jewerly designer Kathy L. Chan of Huntsville are on display at the UAH Library: The Geode and the Treasure Chest, Fifty Years of Class, and The Triptych. These beautiful works of art can be viewed in the glass cases in the front lobby of the building. All three sculptures are composed of multiple pieces of jewelry which symbolize certain aspects of the university.

In this video, The Works of Kathy Chan: The Geode and the Treasure Chest, Fifty Years of Class, and The Triptych, Ms. Chan discusses her creations and their significance to UAH. 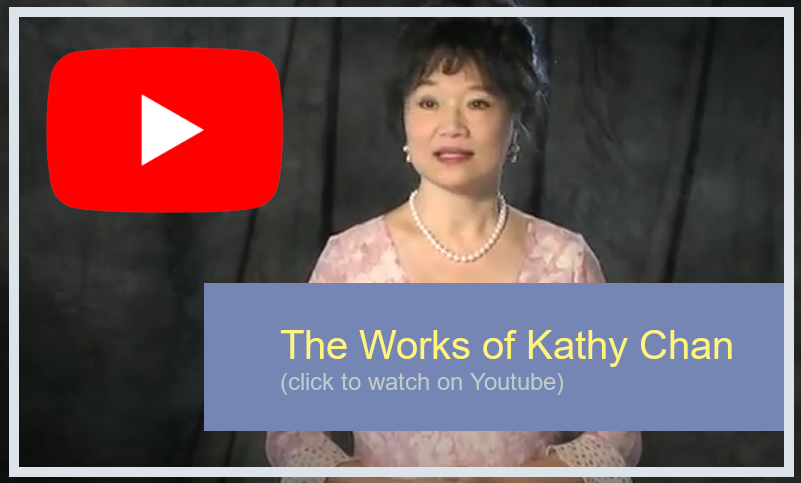 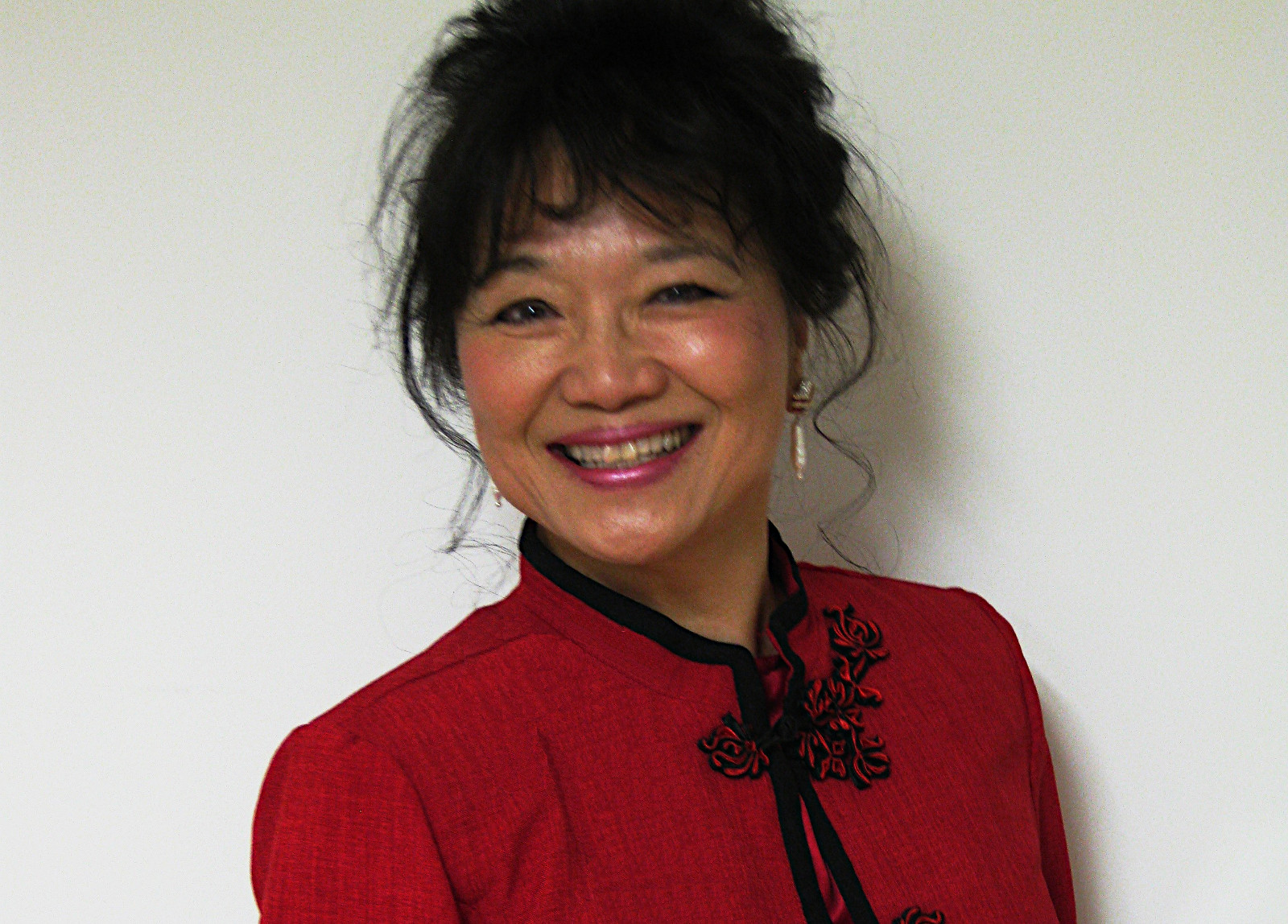 Kathy Chan was born in China, grew up in Brazil, studied in England and the United States and is now an American citizen living in Huntsville, Alabama. Her husband is Dr. C. H. "Tony" Chan and their children are David, Debora, and Gregory. She has two degrees from the University of Alabama in Huntsville (BA in Arts, 1981 and BA in Modern Foreign Language, 1979). In 2008, she was awarded an Honorary Doctorate of Philosophy of Humana Letter by the University of Alabama in Huntsville.

She has been honored with numerous awards for her work in the arts and for her humanitarian efforts. In 2010, she was presented the International Excellence Award by the National Association of Negro Business and Professional Women's Clubs, Inc at the United Nations in New York. In 2007, she received the Alabama Governor's Art Award. In 1981, her etching "March-April" was recognized by an official letter from the White House. She was named Alumnus of Achievement in 2002 by the University of Alabama in Huntsville and in 1994 received the Alumna of the Year. She has also been featured in several Who's Who collections.

The Geode and the Treasure Chest 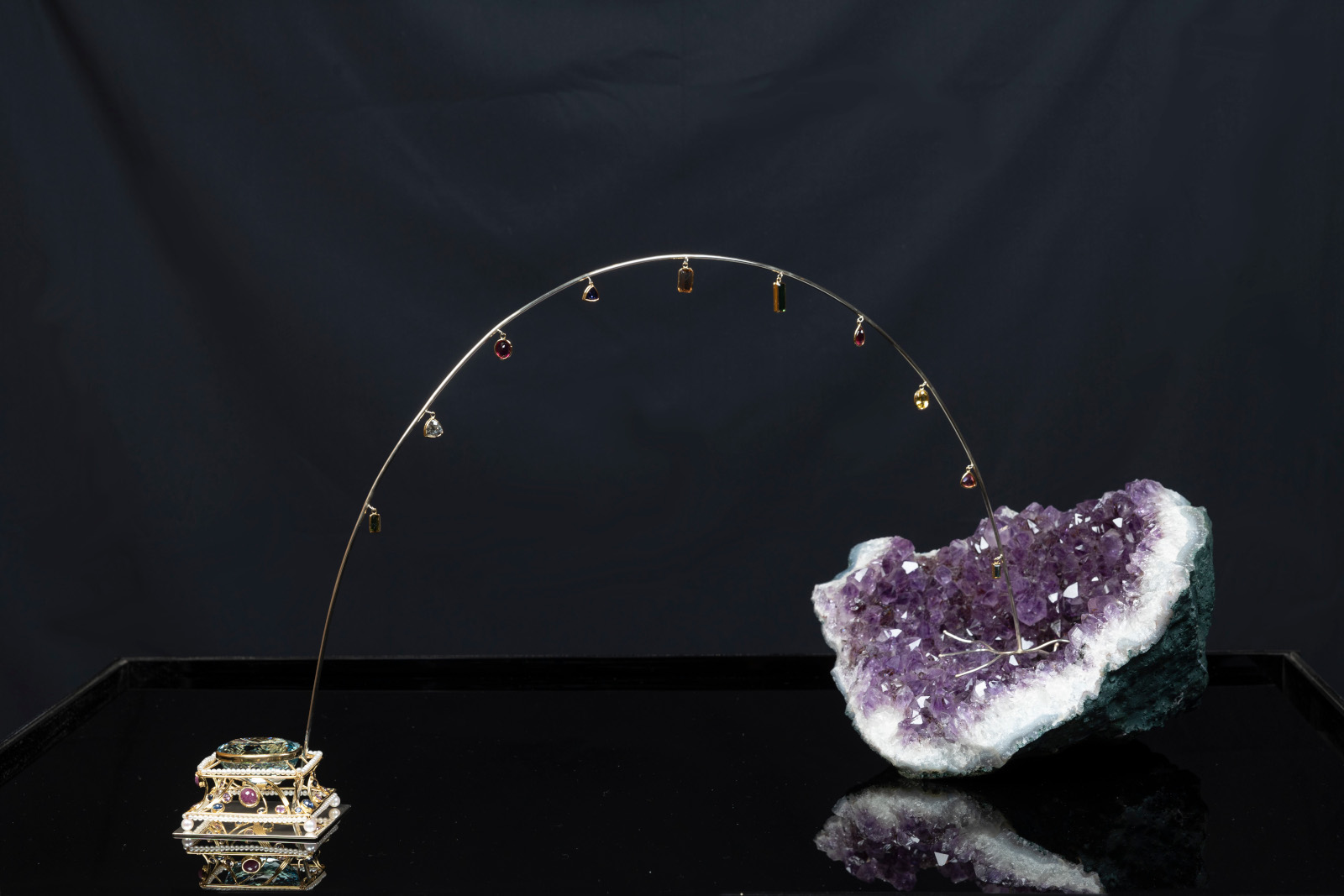 Man's yearning to learn is universal and library is the nucleus for all learning. Its significance is portrayed in this jewel filled analogy.

From its outside appearance, a geode may look like an ordinary rock, but inside it is very special. As you view the interior of this beautiful geode, you see a virtual treasure of gemstones. The largest gemstone in this sculpture is a 277.5-carat blue topaz. Other gemstones include sapphires; green, pink, and bicolor tourmalines; golden beryl, tanzanite, and imperial topaz.

Compare this geode to a library building of plain exterior, but with an interior filled with many books of knowledge. The blue topaz represents the human brain and its capacity to store knowledge. Each individual gemstone represents a stepping stone to knowledge acquired through reading. This wealth of knowledge, to be enjoyed forever, is stored in the brain the most beautiful gem of all. 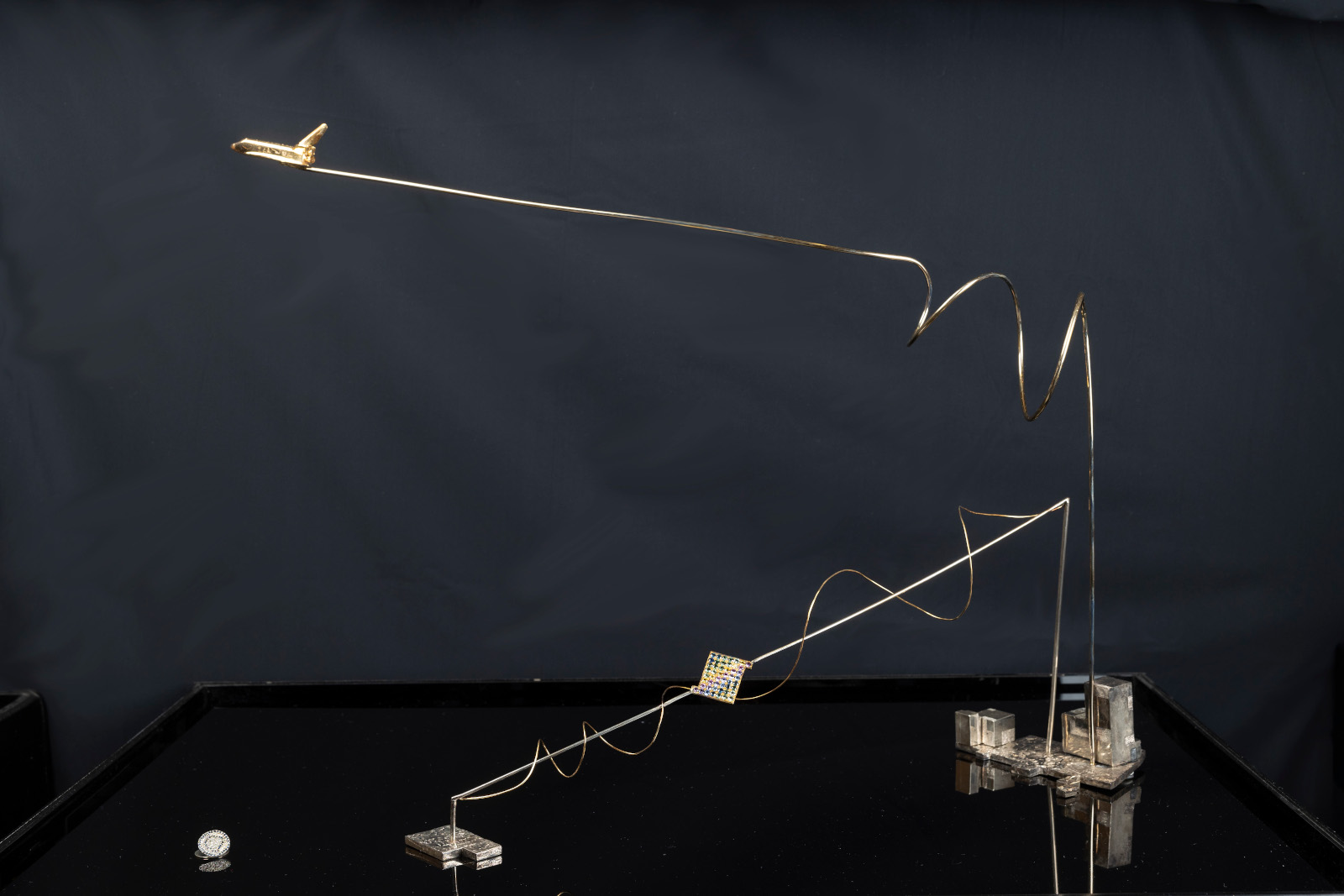 For fifty years the University of Alabama in Huntsville (UAH), from its first day of class in 1950, has been a university like no other. The sculpture is a rendition of depicting each year of the University's progress through time and space.

In this creation, there is an 18-carat gold space shuttle leaving behind a stream of white gold symbolizing the great achievements of this unique university. t also contains fifty different colored rare sapphires set in 22-carat gold.

UAH graduates not only serve the Huntsville community, but also server throughout the nation and th world. Over the years we have seen UAH expand from a campus of 83 acres to its present 376 acres with an infrastructure of 34 major buildings. The first, Morton Hall - was constructed to accommodate a multitude of academic disciplines in five shools. It is significant that the second building was the Von Braun research Hall, after which UAH soared upwards like a rocket. We witnessed UAH, NASA, and other government agencies working side by side in research and scientific achievements, culminating in the new National Space Science and Technology Center. Of particular significance are NASA's space shuttle and the Army's missile defense programs. These organizations and others provide opportunities and incentives for UAH to grow. At the same time, UAH met community and government academic needs.

We celebrate fifty years of education with pride. 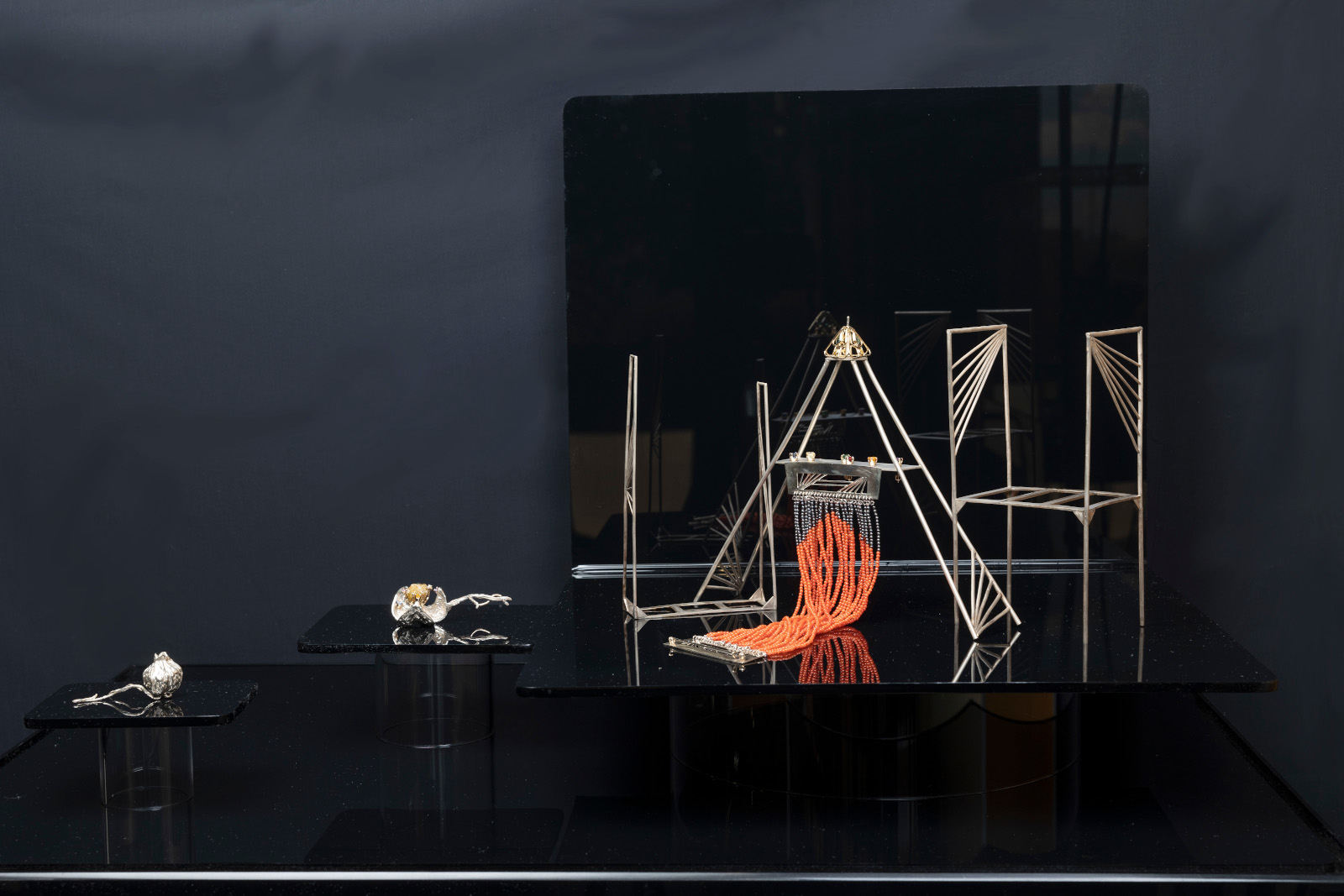 This triptych Sculpture was conceived to celebrate the 25th anniversary of the University of Alabama in Huntsville.

It honors all of the people who have contributed to the growth, achievement, and success UAH.

The first section: From the time Pat Richardson presented his idea to the Huntsville Chamber of Commerce for the establishment of an education center in Huntsville to the actual construction of Morton Hall. A seed is utilized to symbolize the coming of UAH into existence. The seed was sown and soon it germinated and developed a strong root.

The second section: The seed started sprouting with a 19.67-carat diamond in the rough. Symbolisms alluding to the fact that UAH was very much like a diamond in the rough, holding great potential for the future. Scattered on the growing seed there are many fancy colored sapphires that represent the morning dew that nourished the seed, which in its turn symbolizes what Dr. von Braun, the UAH Foundation, and the Huntsville community contributed to make UAH the sound institution we have today.

The third section: Compared with the first seed in germination, this third sculpture has evolved into a giant. UAH with its brilliant break-though in superconductivity, the establishment of six eminent scholar chairs, its diversity in architecture building, and the six colleges are all commemorated in this sculpture by each separate section.