Vice President for Finance and Administration 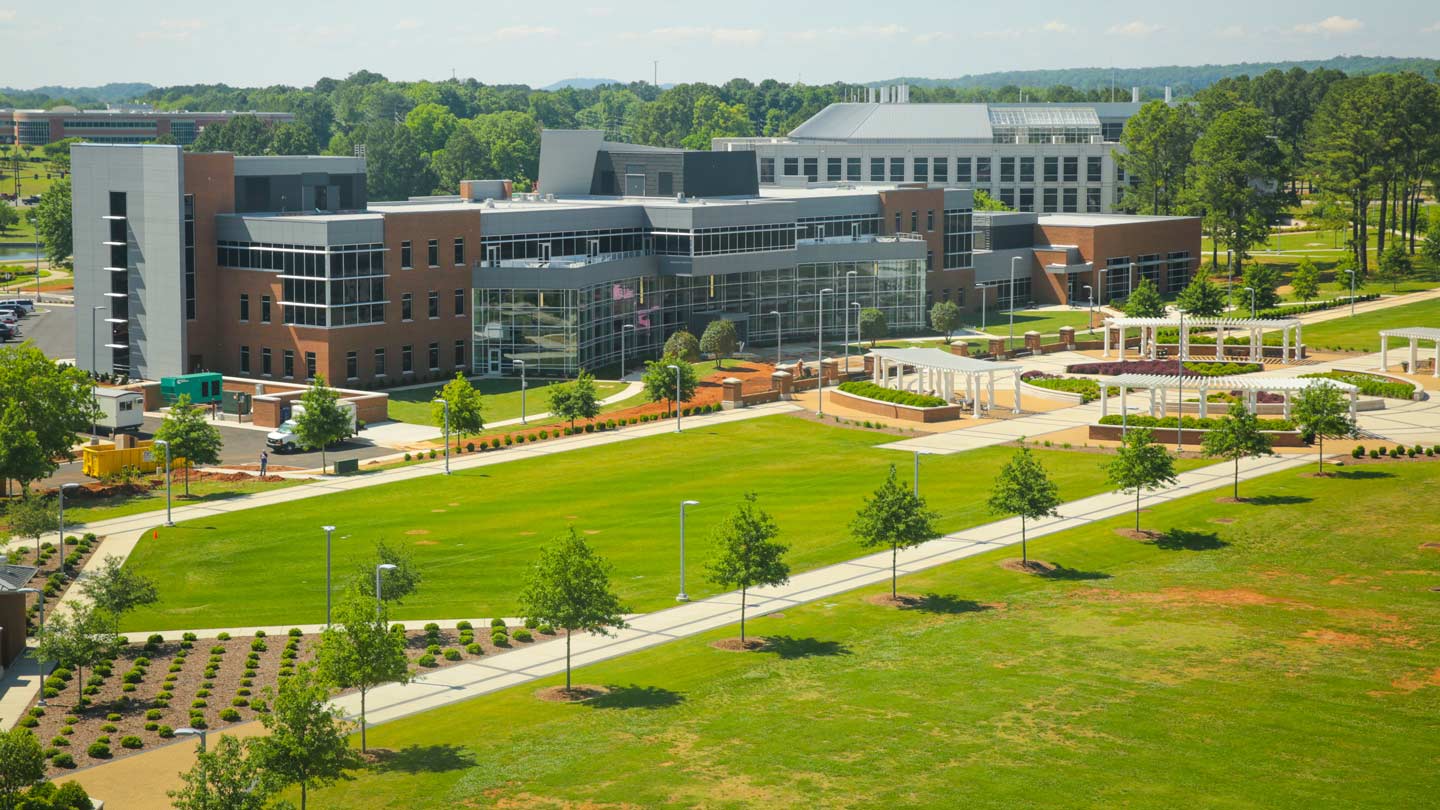 The University of Alabama in Huntsville (UAH) seeks applications and nominations for the position of Vice President for Finance and Administration. Review of materials will begin immediately and continue until the position is filled, with full consideration given to applications received by July 17, 2017.

The University of Alabama in Huntsville 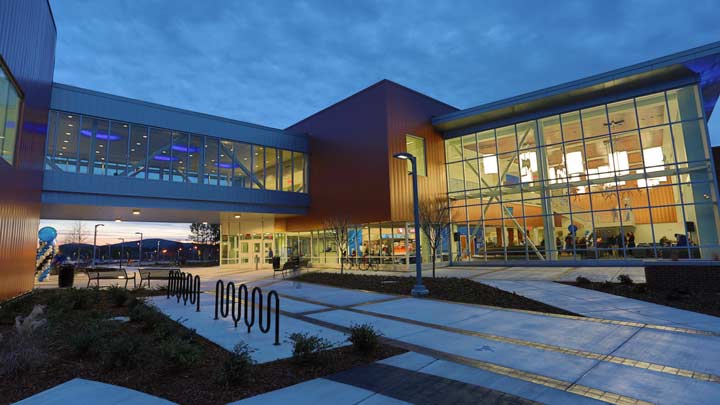 The UAH campus is the anchor tenant for Cummings Research Park, the second largest R&D park in the United States and fourth largest in the world with nearly 300 companies and 25,000 employees. UAH occupies 432 acres in Cummings Research Park in 53+ campus buildings. The University’s campus is minutes from Redstone Arsenal, which is Huntsville’s largest employer. Approximately 35,000 people work for the 22 federal agencies located on the 38,000-acre base, including NASA’s Marshall Space Flight Center, the U.S. Army Aviation & Missile Command, the U.S. Department of Defense Missile Defense Agency, the U.S. Army Materiel Command, and the U.S. Army Aviation & Missile Research Development & Engineering Center.

Since 2008, the University has completed or is currently under way with more than $210 million of new construction. Fiscal year 2016 revenues were approximately $213 million with state appropriations accounting for approximately 21%, federal grants and contracts 34%, tuition and fees 27%, and 18% from a combination of auxiliaries, gifts, state and other grants and contracts, and other revenue sources. The University is implementing a strategic plan and campus master plan to plot a vision for the University for the next five to ten years. View more information on the strategic plan and master plan.

U.S. News & World Report rates UAH as a Tier 1 national university, putting UAH among the top 4 percent of the 2,600 public universities in the United States. UAH was ranked as the 105th best public university in the U.S. by USN&WR. The campus is also rated “very competitive” by Barron’s Guides to Colleges, one of only two in the state of Alabama. For 2015, UAH ranked in the top 20 in five federal research and development expenditure fields as reported by NSF and 14th and 25th in NASA-funded and DoD-funded expenditures, respectively. The Brookings Institution named UAH as the best university in the state based on the economic outcomes of its graduates, and among the top two percent in the nation. PayScale ranks UAH as having the #1 return on investment in Alabama and 121st in the U.S. for in-state students.

View the facts and figures about the University. 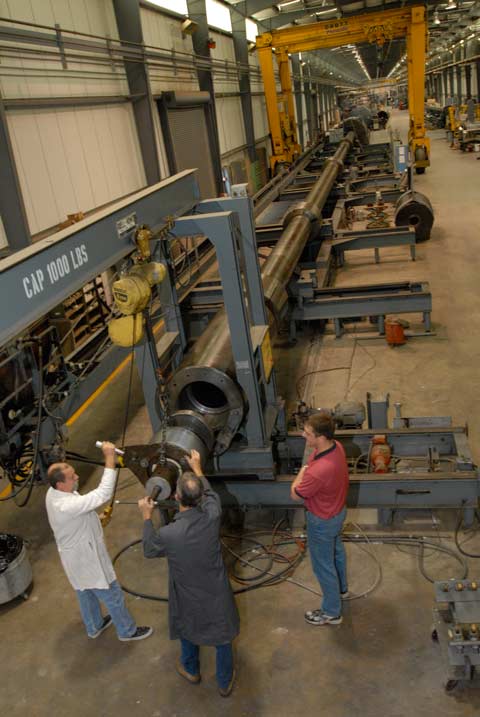 The genesis for a publicly funded institution of higher education began in the late 1940s when Patrick Richardson, a Huntsville attorney, approached Tuscaloosa campus leaders about opening an extension center in Huntsville. His efforts were successful as the first classes were held in January 1950 at West Huntsville High School. About that same time, the U.S. Army moved rocket pioneer Dr. Wernher von Braun and his team of German engineers and scientists from El Paso, Texas, to Redstone Arsenal to manage the U.S. Army’s rocket and missile program. Most of Dr. von Braun’s team transferred to the newly created federal agency, National Aeronautics and Space Administration (NASA), in 1958.

While UAH’s roots were not technical in nature, the direction of the campus changed in 1961 when President John F. Kennedy announced the nation’s goal to land a man on the moon and bring him back safely to Earth before the end of that decade.

Dr. von Braun, sensing a need to provide advanced engineering and science curricula to his workforce, traveled to Montgomery and convinced the Alabama Legislature to appropriate money for a research institute at the University. This institute was created in direct support of the aeronautical and astronautical engineering needs of the U.S. Army and the U.S. space program. The University quickly became a thriving comprehensive university with a special focus on applied science and engineering.

Dr. Benjamin Graves, a graduate of the University of Mississippi in 1942, was president of Millsaps College in Jackson, Mississippi, and was chosen as UAH’s first president in 1970. After leading the University for nine years, he returned to faculty status in 1979 and retired in 1989.

Dr. Louis Padulo, former Stanford professor and dean of engineering of Boston University, became UAH’s third president in 1988 and served through 1990. Huntsville business leader Joseph Moquin took over the UAH presidency on an interim basis in 1990.

Dr. Frank Franz, who was then provost at West Virginia University, was chosen as UAH’s fourth president in 1990. At the beginning of the 2006–2007 academic year, Frank Franz announced his plan to step down as president after that year.

On July 1, 2007, Dr. David B. Williams, formerly a professor of materials science and engineering and the vice provost for research at Lehigh University, began serving as UAH’s fifth president. He left in 2011 to join The Ohio State University as dean of engineering.

Robert Altenkirch was hired as the University’s sixth president in September 2011. Dr. Altenkirch served as president of the New Jersey Institute of Technology for nine years before joining UAH. 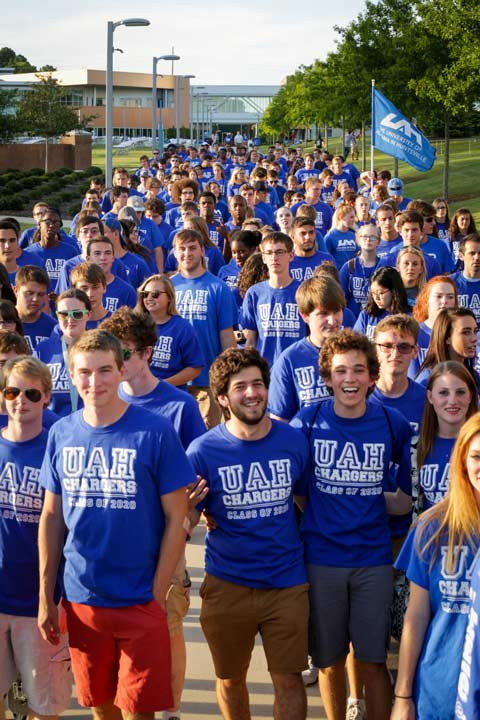 The University’s enrollment in the Fall of 2016 was approximately 8,500 students. The UAH 2016 freshman class had an average ACT score of 27.6, highest among Alabama’s public universities. Forty percent of this freshman class scored a 4.0 or higher on their high school grade point average, and 35 percent scored 30 or higher on their ACT. Undergraduates include 42 percent women, 58 percent men. Approximately half of all UAH graduates earn degrees in engineering or science.

Hundreds of UAH students pursue internships and other experiential learning opportunities on Redstone Arsenal and numerous UAH degree programs offer a curriculum that is complementary to the Arsenal’s research and technological objectives. UAH graduates gain a competitive edge in pursuing careers with federal or contract organizations at Redstone, which is UAH’s largest customer base.

UAH is one of America’s premier doctoral-granting, research-intensive universities. Located adjacent to the Redstone Arsenal, an economic engine of more than $100 billion per year, UAH faculty, staff, and students are able to conduct research side by side with world-class experts from numerous federal agencies, primarily with Department of Defense agencies and NASA.

UAH regularly ranks among the Top 25 universities in research funded by NASA and by the Department of Defense, but UAH also performs cutting-edge research for the National Science Foundation, the National Oceanic and Atmospheric Administration, the Department of Energy, and the National Institutes of Health. As the anchor tenant of Cummings Research Park, the second-largest corporate research and technology park in the United States, UAH collaborates with nearly 285 high-technology companies serving the U.S. aerospace and defense sectors, as well as scientists and entrepreneurs at the HudsonAlpha Institute for Biotechnology. UAH has achieved the status in the High Research Activity category by The Carnegie Foundation for the Advancement of Teaching, placing UAH among a select group of public universities in America.

In the 2016 National Science Foundation federal research funding rankings, UAH had five programs ranked in the top 20 in the nation.

UAH is also ranked consistently among the top universities in the nation in NASA-sponsored research (14th) and 25th in DoD research. 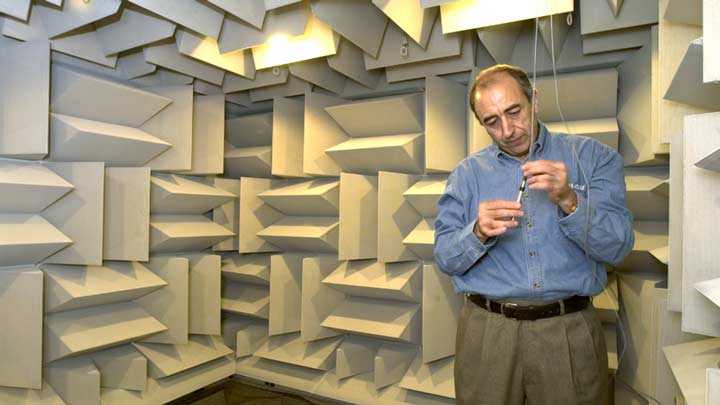 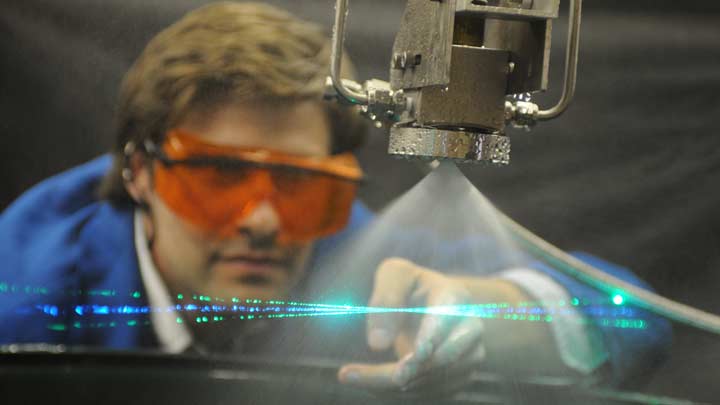 It is UAH’s mission to assist every student to make the most of their time as a Charger. That’s why the University is dedicated to creating an enriching campus life, encouraging involvement in its many extracurricular activities and organizations, and providing programs that support student learning, development, and leadership. UAH has an active student life that is designed to meet the broad needs of the University’s student body. UAH has more than 170 student-run organizations on campus. 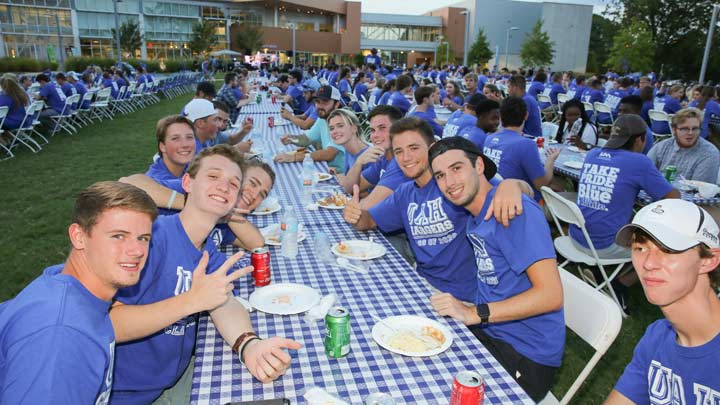 UAH is home to the six sororities and eight fraternities:

UAH has five residence halls: Central Campus Residence Hall, Frank Franz Hall, North Campus Residence Hall, Southeast Campus Housing, and Charger Village. A sixth residence hall is under construction and completion is expected in Fall of 2018. The total beds on campus will exceed 2,000 at that time. Each student on campus has the privilege of their own bedroom, and shares a bathroom with one person, and a common area with three other individuals. 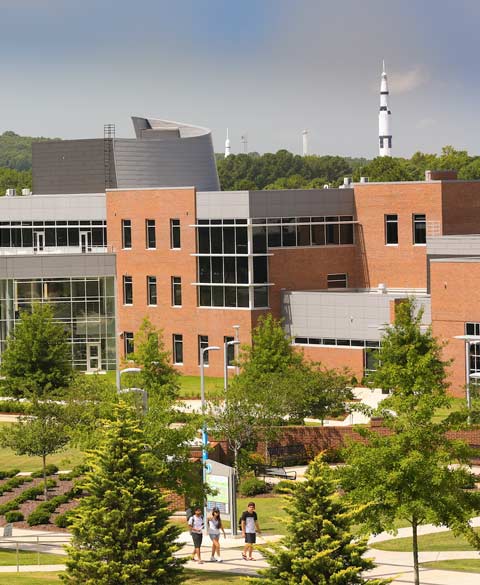 Located in the Tennessee Valley of Northern Alabama, Huntsville has a major presence of technology, space, and defense industries, which allows the city to offer a variety of educational, recreational, and cultural opportunities. Also known as the “Rocket City,” Huntsville is the home of NASA’s Marshall Space Flight Center, where the first rockets to take Americans to the moon were designed and built. Huntsville has an international reputation as a high-tech center with ties to NASA, Redstone Arsenal, and major government and private research organizations. Many of the nation’s top aerospace and defense and engineering-related companies have locations in Huntsville, such as Aerojet/Rocketdyne, Lockheed Martin, Northrop Grumman, General Dynamics, Teledyne Brown Engineering, SAIC Corp., Computer Sciences Corp., Raytheon, Boeing, and Siemens.

The culturally diverse Huntsville community is recognized nationally for its strong economy and high levels of educational attainment. The city’s residents have one of the highest per capita incomes and standards of living in the southeastern United States. Huntsville was named among the nation’s “New Silicon Cities” (Wall Street Journal), is the #7 most-educated city in the South (ValuePenguin), and is among the Best College Towns in the South (Southern Living). MintLife lists Huntsville as one of the top 17 most affordable U.S. cities. Huntsville is also #1 on the list of Best Affordable Places to Live (Livability.com) and is #3 on list of Best Mid-Size Cities to Make a Living in the U.S. (Money Geek).

As the second-largest metropolitan area in Alabama, Huntsville, greater Madison County and its surrounding communities are a testament to the Southern traditions of hospitality, curiosity, and fun. In addition to its diversified high-tech economy, Huntsville is rich in cultural and recreational activities with a thriving music and arts scene. From the down-home comfort of Madison to the history and high-tech bustle of Huntsville, there’s never a dull moment in this quickly developing region. It’s not hard to find a nearby quiet corner, either. Over 180,000 residents call Huntsville home, while the population of the metropolitan area is over 400,000 and growing. For more information on the Greater Huntsville Community, visit http://www.huntsville.org/ and http://www.huntsvillealabamausa.com. View a map of the metro area.

The Vice President for Finance and Administration

Reporting to the President, the Vice President for Finance and Administration serves as the chief financial officer of the University and is accountable for the fiscal affairs and certain administrative support functions of the University including financial planning; budget development and control; business services including purchasing, accounts payable, accounting and financial reporting, and Office of the Bursar; human resources; facilities and operations including building construction and maintenance, custodial services, grounds management, energy management and plant systems, campus planning and the Office of the Campus Architect; campus safety including Campus Police; and emergency management and all-hazards response to emergency or disaster conditions and certain aspects of risk management.

The position requires, at a minimum, a master’s degree (MA or MS) or equivalent with five years of related experience and/or training or an equivalent combination of education and experience.

Applications will be reviewed as received and continue until the position is filled. Those received by July 17, 2017 will be given full consideration. Nominations, applications, and inquiries may be sent in confidence. Application materials (to include a letter of interest, curriculum vitae, and the full contact information for five references – who will not be contacted without permission) must be electronically submitted to:

NON-DISCRIMINATION POLICY: The University is an Affirmative Action Employer of women, minorities, qualified individuals with a disability and covered veterans.

View the University’s Equal Opportunity and Affirmative Action Policy. It summarizes the University’s commitment to provide equal employment opportunities and explains the complaint process for an individual that believes he/she has been the victim of discrimination.