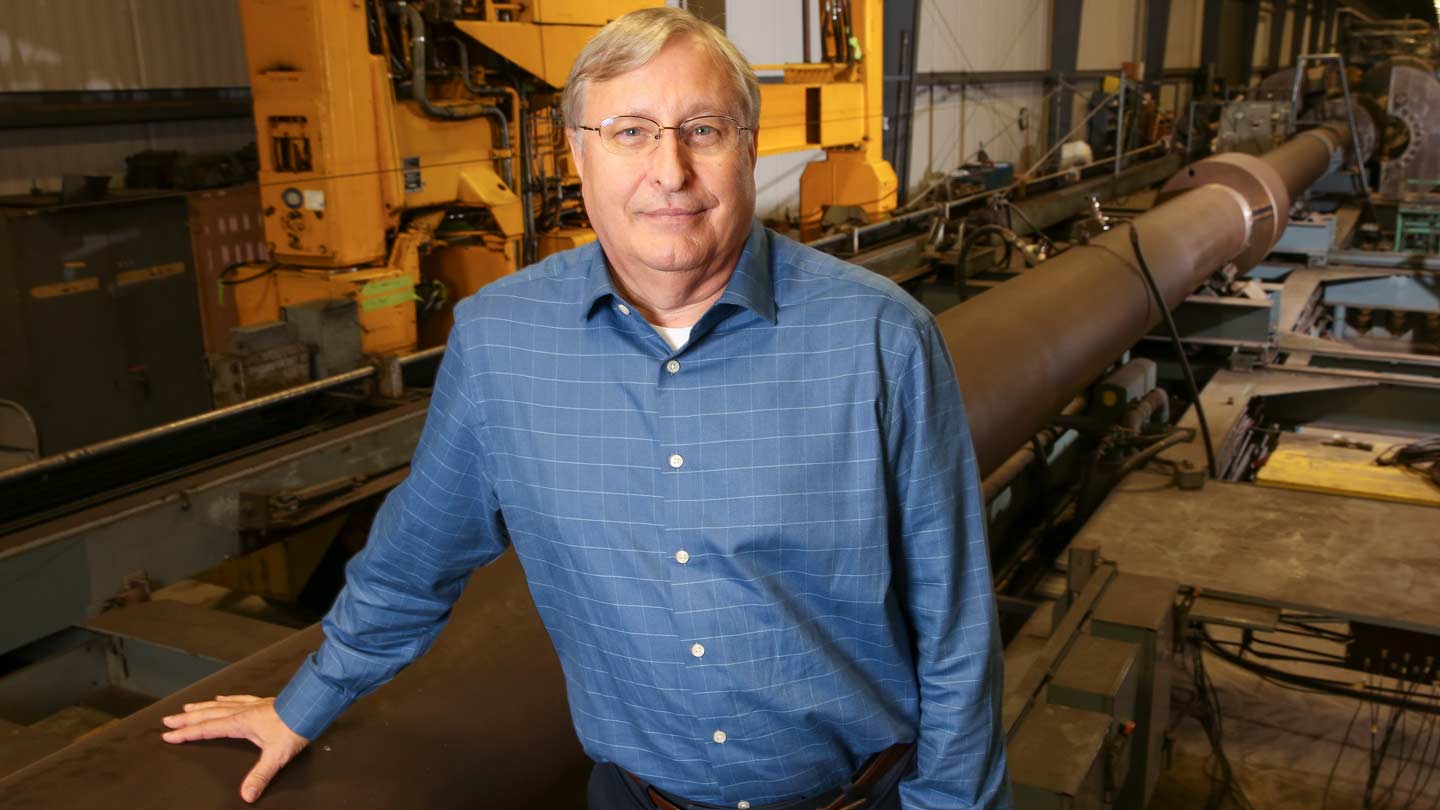 “The Chinese and Russians are ahead of us in hypersonic R&D and testing,” says Dr. Steve Messervy, director of UAH’s Research Institute.

When Russian President Vladimir Putin announced that his country’s "invulnerable" Avangard hypersonic nuclear missiles were ready to deploy, that focused attention at the United States Dept. of Defense on hypersonic development and testing.

That research will have a large impact on the future U.S. national security picture, and could also bring commercial benefits. Unlike the predictable parabolic flight of conventional or Intercontinental Ballistic Missiles (ICBMs), hypersonic missiles fly at speeds greatly exceeding the speed of sound and can change trajectory to avoid detection or interception countermeasures.

"The Chinese and Russians are ahead of us in hypersonic R&D and testing," says Dr. Steve Messervy, director of The University of Alabama in Huntsville Research Institute. "Just in the open literature, everybody knows they’re ahead of us."

The Dept. of Defense has assigned Under Secretary of Defense for Research and Engineering Mike Griffin, a former UAH eminent scholar and tenured professor of mechanical and aerospace engineering, to put some thrust behind U.S. hypersonic research.

UAH is well equipped to partner with commercial clients and the Dept. of Defense in hypersonic projectile testing and data acquisition to research what affects projectiles and aircraft flying at hypersonic speeds, Dr. Messervy says.

The university’s Aerophysics Research Center (ARC), operating from the Aerophysics Research Facility located on Redstone Arsenal, provides the government and commercial clients with a ready means of hypersonic scaled testing with its three, two-stage light gas gun systems that investigate the interactions of high-speed vehicles and their environments.

"I do a lot of work with the Army Space and Missile Defense Command (SMDC)," Dr. Messervy says. "A lot of people are working on the technical issues of hypersonic flight, which generates high temperature and control issues at that speed."

It’s a ballistics race right now, since the Russians have a boost glide hypersonic missile. The Chinese have built experimental versions.

Dr. Jason Cassibry, associate professor of mechanical and aerospace engineering, has seen a rise in student interest in taking his hypersonics course.

"The idea is to make a missile change its parabolic flight pattern," Dr. Messervy says. That can be done through aerodynamic design, control software, or both.

Areas of U.S. research interest include the thermodynamics of the bow wave created in front of a projectile at Mach 5 or higher speeds and the physics of the plasma field created by that wave. Both influence and affect projectile design, the materials used and the methods of flight control, Dr. Messervy says.

"The area that UAH works in most is helping establish some of the testing that will be required," he says. The high costs of full-scale tests demand that prototypes first be researched by computer simulation and then in scaled testing, he says. Scaled testing is UAH’s forte.

One-eighth scale testing is where the so-called "big guns" at UAH’s ARC provide critical data that UAH scales up to represent a full-size flight. Sometimes ARC clients provide the projectiles, but typically, test projectiles are made to client specifications in the ARC machine shop.

UAH’s light gas guns simulate environments in which a projectile would actually fly, so it is possible to test it at various simulated altitudes at critical points along its flight path.

"We can invoke whatever environment we need to in the light gas gun," Dr. Messervy says. "For example, we can make it look like flight at 70,000 feet, based on the air molecules contained inside the gun." Software captures every aspect of the test flight and impact, generating needed data as the cameras record.

The ARC fills an essential function that cannot be supplanted in the testing chain, Dr. Messervy says.

"You can build all kinds of computer models, but how do you validate a computer model? You do some large-scale testing – but before you do that you do some scaled testing. The costs are just too prohibitive to do it any other way."

UAH is also involved in a federal initiative to construct a center to perform hardware in the loop (HIL) simulation testing on the SMDC campus at Redstone. HIL testing is a dynamic systems technique that allows development and testing of real-time, complex systems in operation. Commercial defense firms will be partners in its development.

"UAH would like to help the government build this facility," Dr. Messervy says. "What we are interested in, based on our testing, is that the hardware in the loop facility as it is built will be a long-term investment."

When Dr. Messervy needs a physicist, he turns to Dr. Jason Cassibry, associate professor of mechanical and aerospace engineering, whose work is motivated by the lead our adversaries have.

"We have a real scare here, a real threat," Dr. Cassibry says. "Hypersonic missiles present a threat that no modern defense can stop, and we need to come up with solutions to that threat."

A researcher for UAH’s Propulsion Research Center (PRC), Dr. Cassibry says the center is pursuing opportunities in hypersonic research in collaboration with those underway at the ARC.

"We’re very enthusiastic about the opportunities that are coming up," he says, "and even though this is defense work at this stage, it will trickle down to commercial applications, which will benefit society if we can solve these challenges."

As an educator, Dr. Cassibry teaches a hypersonics course every two years to build capabilities in students to pursue the work.

"We have seen a noticeable increase in enrollment this past fall," he says. "The interest has built because of the rapid increase in funding in hypersonics."

As a researcher, Dr. Cassibry works in numerical modeling in simulations.

"I’m interested in better integration of simulations with experiments in order to better understand the physics of hypersonic vehicle systems," he says.

Closing the information-gathering gaps between simulations and physical testing will better inform researchers as they progress to full-scale tests.

"You just don’t know what might happen in a real-world test because of the myriad of complexities involved," Dr. Cassibry says. "Increased collaboration between experiment and simulation groups will help buy down the technical risks of flight tests."

"In an experiment, you might have some really great flight data in the form of imaging, for example, or you might have some data about the temperature inside the shock wave or boundary layer, but you can’t get detailed information along the surface, so simulations that validate the available diagnostic information can help fill in the gaps."

If the data sets agree, he says, then a more complete picture of the forces and flow fields around the test body emerges.

"I’ve been working with a graduate student and collaboratively with companies and with the ARC and PRC in going after funding," Dr. Cassibry says. "We are working on some test cases now to try to position ourselves for opportunities as they come along." 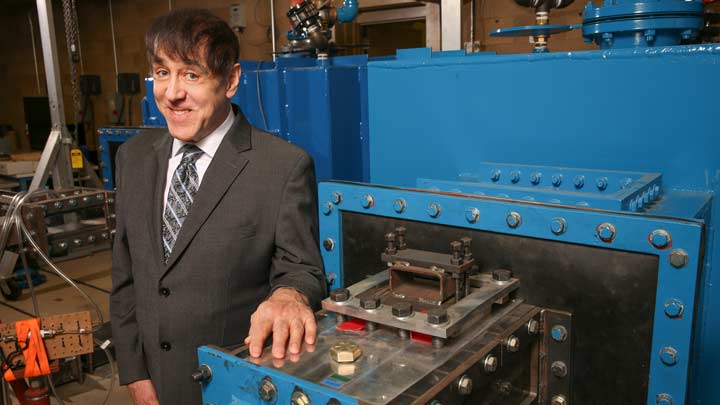 Dr. Phillip Ligrani, a professor of mechanical and aerospace engineering and the university’s eminent scholar in propulsion, is working on a proposal for UAH’s TranSonic/SuperSonic/WindTunnel to do hypersonic research.

His work could dovetail with the proposed HIL facility at Redstone Arsenal. Filling the gaps between simulation and physical testing "allows you to get a lot closer to a flight test without having to commit to the funds and risk associated with a flight test," he says. It could speed development times.

UAH’s TranSonic/SuperSonic/WindTunnel (or TS/SS/WT) is another PRC venture, and principal investigator Dr. Phillip Ligrani is working in collaboration with other researchers on a proposal to the National Science Foundation (NSF) that would see the $2 million facility doing hypersonic research.

"We’re developing ideas for a proposal for the NSF, and also continuing to talk with people who are with NASA and the U.S. Air Force and others who are involved in hypersonic research," says Dr. Ligrani, a professor of mechanical and aerospace engineering and the university’s eminent scholar in propulsion.

"We have the infrastructure to easily achieve Mach numbers up to 4," Dr. Ligrani says. "Producing flows at higher Mach numbers is a challenge, because, at hypersonic speeds up to Mach 6, the pressures can be higher compared to a Mach 2.7 supersonic flow by a factor as large as 68."

"It’s because the velocities are so high," Dr. Ligrani says. "Velocity variations and velocity gradients are also very high, so there’s a lot of velocity change in a very short distance. That generates very high friction and very high drag."

Understanding hypersonic aerodynamic heating processes caused by drag could lead to better leading edge shapes and materials to deal with the heat and pressure. UAH is already involved in aerodynamic testing of engine intake shock wave phenomena at supersonic speeds.