Can Billions of Corn Plants Affect the Weather in Nebraska? 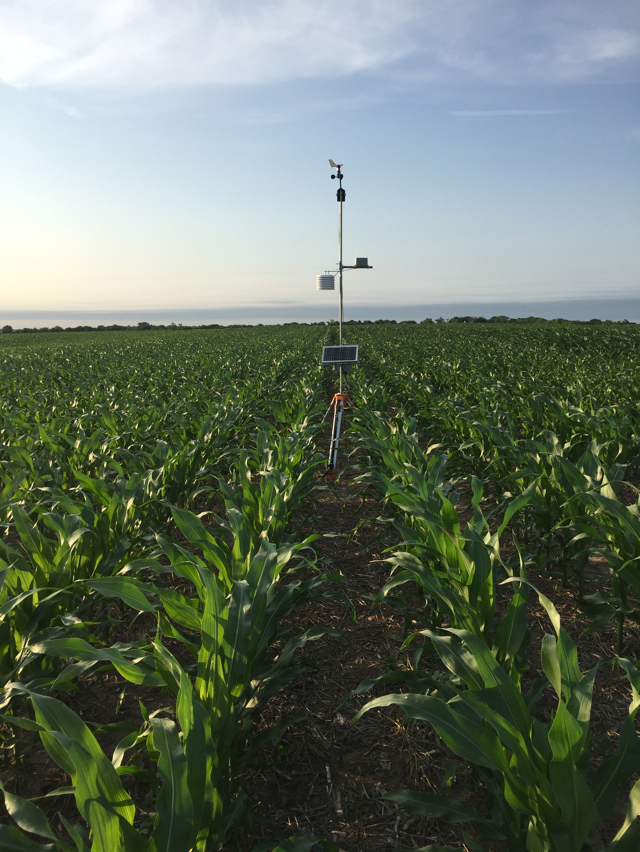 One of the 80 EMESH weather stations in the process of being deployed across the Nebraska countryside by Dr. Udaysankar Nair of the University of Alabama in Huntsville as part of the NSF GRAINEX project, May-July 2018.

When thinking of irrigation, most people imagine the huge dry valleys of California – Sacramento, San Joaquin, Coachella, Imperial – where so much of our food and fiber is grown. However, it is the state of Nebraska that slakes the thirst of more land than even California with a tremendous 9.3 million acres now modified by this human-engineered climate.

But does turning a prairie into an irrigated plain in which tens of billions of corn plants - each acting like a tiny pump as they grow, drawing water from the irrigated-soil and transpiring it to cool and moisten the air - have an impact on the overall climate?

That’s the key question a group of scientists from six institutions came to the cornhusker state to investigate this summer.

A major part of the GRAINEX project, as it is called, is a grid of low-cost weather stations built at The University of Alabama in Huntsville (UAH). Like skinny metal scarecrows peeking over a shifting sea of corn, the UAH Environmental Monitoring, Economical Sensor Hubs (EMESH) stations tracked temperature, wind speed and direction, humidity and other weather variables.

Supported by a grant from the National Science Foundation, UAH's Dr. Udaysankar Nair, an associate professor of atmospheric science, and his graduate students built and by the end of the experiment will have deployed 80 EMESH stations. They are looking for clues about how irrigation in one part of the state might be influencing weather in less-irrigated areas nearby.

The general rule is that when more water is available, the daytime air is cooler, cloud coverage can increase and even more rain may fall. It’s almost as if that old adage from a century ago was true when homesteaders flocked to the Plains thinking, "Rain follows the plow." Of course the Dust Bowl put an end to that idea. In this case however the results may be counter-intuitive, so, rather than "Rain follows the Plow," we have, "Rain flees the pivot."

"We did some numerical modeling, and when you put in large-scale irrigation it's going to cool the air right overhead," Nair said. "You also have more moisture to form clouds, but immediately overhead and downwind of that you actually get reduced rain. The models show the moisture being piped to other areas." This model result needs to be tested with real observations.

UAH's sensor network will be part of a larger campaign organized by Nair and Dr. Rezaul Mahmood from the University of Nebraska, Lincoln (UNL). In addition to the EMESH packages, the campaign will include mobile Doppler radar units, weather balloon launches and a dozen ground stations to measure the flow of energy near the surface.

Joining UNL and UAH, were Western Kentucky University WKU) and from Boulder Colorado, the University of Colorado (UCB), the National Center for Atmospheric Research (NCAR) and the Center for Severe Weather Research.

Mahmood, formerly of UWK, is the lead researcher and new Director of the High Plains Climate Center at UNL. "We designed this data collection campaign for a two-month period so it would allow us to understand the impacts of irrigation right when it begins and during its maximum application in mid- to late-July," he said.

One veteran scientist on the project, Roger Pielke, Sr. of UCB, has a long history of research into the ways that weather is changed when humans modify the landscape. There is no question that prairie grass and irrigated corn are two very different kinds of vegetation especially in the way they affect the surrounding air, and thus probably the weather too. "The assessment of the role of first order forcing of weather and climate, however, remains incompletely understood. Model studies indicate [a changing landscape] can be more important regionally to weather than other human forcings" (such as greenhouse gases), said Dr. Pielke.

NCAR’s team will provide most of the computational horsepower for the modeling part of the project, where scientists will learn more about how the principles of physics and atmospheric science need to be accommodated to address this important question – how does changing the landscape change the weather?

"Prior studies have found that the Great Plains is a hotspot where soil moisture plays an important role in cloud formation and precipitation," said Nick Anderson, a program director in the National Science Foundation’s Division of Atmospheric and Geospace Sciences, which funded the research. "The results from this study will be valuable to our understanding of the link between irrigation and precipitation."

The field portion of the project began in May and will continue through the end of July.