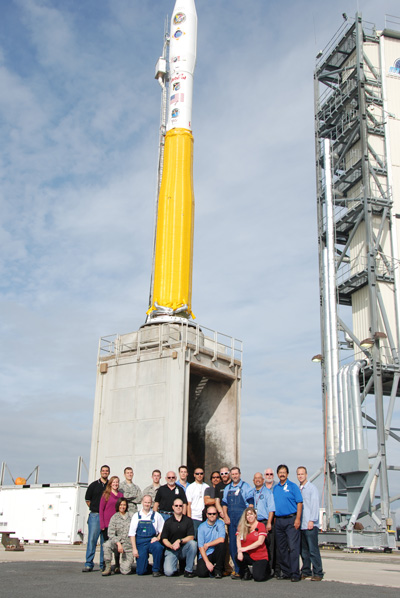 Workers with the Minotaur-1 launch vehicle after completion of final arming Monday. The vehicle was powered by four solid-fueled stages derived from the Minuteman missile and commercial programs.

HUNTSVILLE, Ala. (Nov. 20, 2013) - Members of the Space Hardware Club (SHC) at The University of Alabama in Huntsville (UAH) were still attempting Wednesday to contact ChargerSat-1, the university's first student-built cubesat to be rocketed into space.

"We did get some indications that a number of the other satellites deployed and so it is very likely that ours also deployed," said SHC team lead Eric Becnel Wednesday morning from the launch site at the Mid-Atlantic Regional Spaceport at NASA's Wallops Flight Facility on Virginia's Eastern Shore. "The odds are that we will hear it. It's just a matter of locating it."

If it successfully deployed, ChargerSat-1 passed over Huntsville in the hours just before midnight Tuesday, beeping on 437.405 MHz. SHC members are asking the public to track that frequency and report contact to: Space@uah.edu.

The Minotaur 1 rocket housing ChargerSat-1 soared into space at 7:15 p.m. CST Tuesday from launch pad 0B at the Virginia spaceport.

The nighttime launch was visible along the U.S. East Coast, with viewing opportunities from South Carolina to New York and inland to the Appalachians.

Members of the SHC were gathered at Wallops to watch the launch. ChargerSat-1 is an approximately 4-by-4-by-4 inch cube. Technicians at Wallops confirmed that the main payload satellite, STPSat 3, had deployed.

The 2.2-pound ChargerSat-1 has three objectives:

The 29-satellite mission was set to demonstrate cost-cutting technologies for the U.S. military. 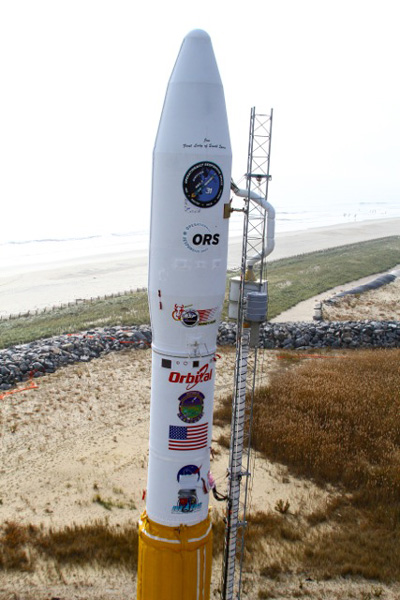 Tuesday's Minotaur launch from Virginia had been dependent on Monday's launch of NASA's Mars-bound MAVEN spacecraft going on schedule from Cape Canaveral, Fla. The two missions share a tracking site in Antigua.

On Monday, workers completed final arming of the Minotaur 1 launch vehicle, powered by four solid-fueled stages derived from the Minuteman missile and commercial programs. Technicians constructed the 70-foot-tall rocket out of stockpiled government-furnished missile stages and commercial hardware. The upper stack was composed of the Minotaur 1's Orion 50XL and Orion 38 second and third stage motors, plus the rocket's payload fairing containing the mission's satellites.

The mission's 29-satellite manifest was headlined by STPSat 3, a host spacecraft for five experiments and sensors to measure the space environment. Another 28 CubeSats were housed inside "wafers" to deploy from the Minotaur upper stage once it reached its 310-mile high orbit.

The satellites were enclosed inside the Minotaur's fairing, flying in the 61-inch-diameter configuration for the launch.