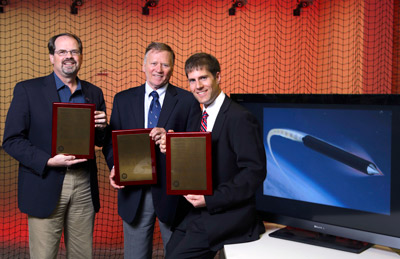 Dr. Brian Landrum, left, Dr. James Blackmon and Sean Entrekin have received a patent on a new, more efficient way to package rocket engines. Entrekin came up with the idea while a junior at UAH.
Michael Mercier | UAH

HUNTSVILLE, Ala. (Oct. 28, 2013) - A University of Alabama in Huntsville (UAH) aerospace engineering undergraduate student's idea for a new, more efficient way to package rocket engines has won him and two UAH professors a recent patent.

Various Rocket-Based Combined Cycle (RBCC) propulsion systems have been proposed to marry the best aspects of rocket and air-breathing propulsion together. In a reversal of conventional practice, Entrekin's design places an air-breathing ramjet engine within the center body of an aerospike or plug-nozzle rocket.

That’s the idea, that a company will step up and want to use this. In principle, you can take an existing system and put these plug nozzles directly on it to retrofit it.

Once the rocket engine's initial boosting function is completed, it's turned off as the ramjet takes over. The external rocket can be restarted as needed for additional thrust and acceleration.

The new design dramatically reduces drag, increases efficiency over a larger range of altitudes and flight speeds, simplifies the design, lowers cost and provides more versatility in the size and types of engines that can be used in various applications.

"The normal rocket engine works best at one altitude, and engineers can design for that, but plug nozzles work at all altitudes," said Dr. Blackmon.

Now the trio hopes there will be interest in building and flying the design, in which UAH owns some royalty rights.

"That's the idea, that a company will step up and want to use this," Dr. Blackmon said. "In principle, you can take an existing system and put these plug nozzles directly on it to retrofit it."

Entrekin said the idea seems to have just popped into his mind one day as an undergraduate.

"It was during a break from school," he said. "I was at my parents' house. I'd just started my junior year, and I was thinking about different stuff and I just kind of thought about it."

He took the idea to Dr. Blackmon, whose office walls are covered with framed patent certificates he has been awarded. Entrekin had already been working with Dr. Blackmon on a novel heat pipe design developed in China, and that research subsequently led to Entrekin's master's thesis. They then met with Dr. Landrum, who has long worked in this area.

"Sean was an undergraduate research student for us when he brought us this idea," said Dr. Landrum. "I was interested in it from the perspective of improving propulsion efficiency and packaging."

The three further extended Entrekin's basic concept. Once computer modeling and prototype designs had been completed, they made the decision to seek the patent.