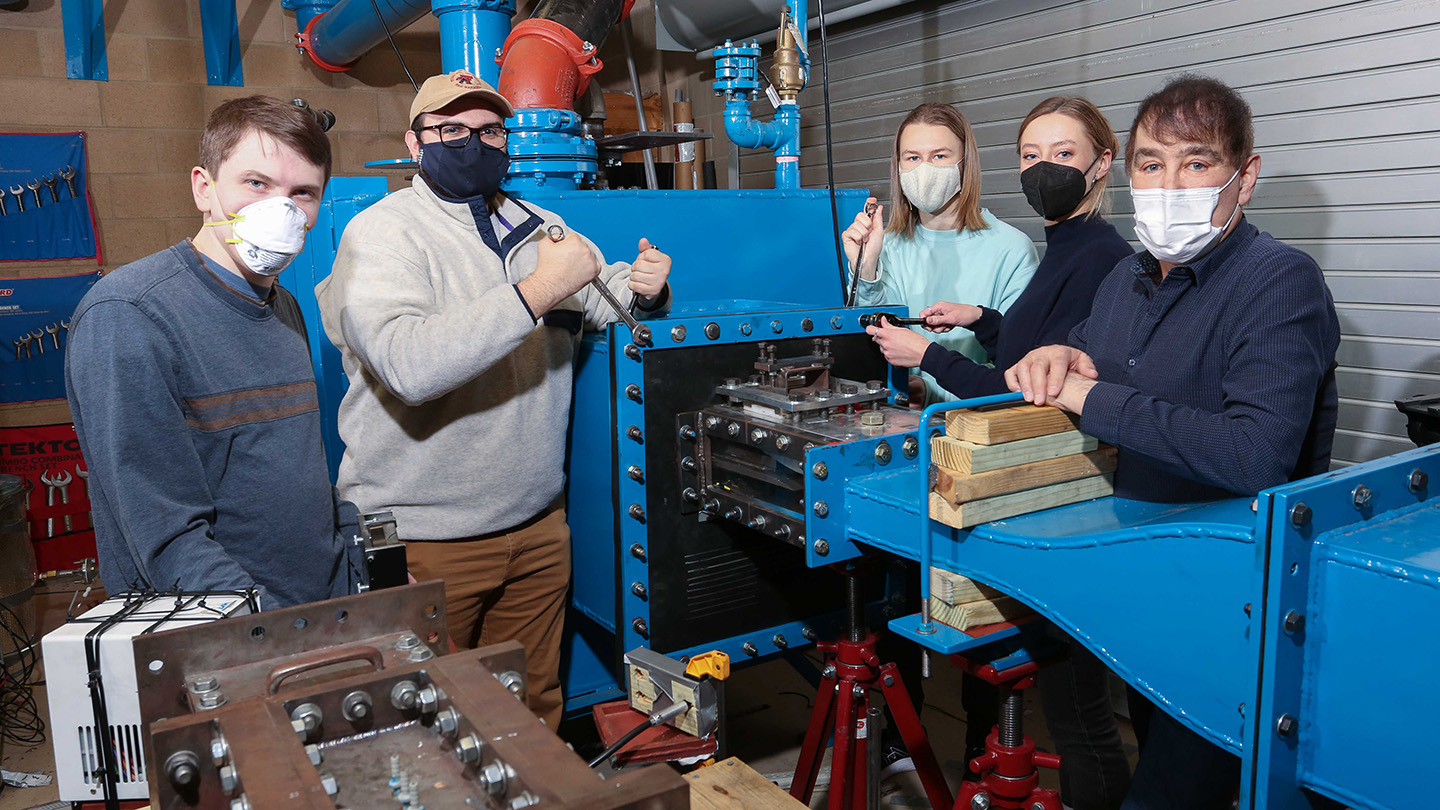 From left, doctoral student Ward Manneschmidt and undergraduates Quinn Barbee, Gryson Fulmer and Sophie Nitschke join Dr. Phillip Ligrani in the Supersonic Wind Tunnel Laboratory at UAH’s Johnson Research Center. Nitschke is from the University of Stuttgart, Germany, and is undertaking her thesis at UAH.

The wind tunnel at the University of Alabama in Huntsville (UAH) will be used to study the effects of shock waves at transonic, supersonic and hypersonic speeds under a three-year, $249,000 basic research grant from the Thermal Transport Program of the National Science Foundation.

Known as the SuperSonic/TranSonic/WindTunnel or SS/TS/WT, the $2 million facility at UAH, which is a part of the University of Alabama System, will be used to investigate phenomena ranging from modified turbulence characteristics from complex shock wave structure to altered thermal transport rates from local flow unsteadiness as a result of different types of shock waves. A shock wave is a strong pressure wave produced in supersonic and hypersonic air flows.

The ultimate goal is improved understanding of thermal transport, says Dr. Ligrani. Thermal transport is important for internal flows within gas turbines, aero-engines and scramjets, and for external flows around high-speed aircraft, scramjets and hypersonic vehicles, especially within the endoatmosphere. The endoatmosphere is Earth’s lower atmosphere, which extends to around 100 kilometers above the surface.

Dr. Ligrani is the project’s co-principal investigator with Dr. Danesh K Tafti, a professor of mechanical engineering from the Virginia Polytechnic Institute and State University in Blacksburg.

“The project is highly transformational and highly relevant, as a result of direct potential applications to a variety of aerospace and turbomachinery components and devices, including gas turbines, aero-engines, high-speed aircraft, scramjets and hypersonic cruise vehicles,” says Dr. Ligrani.

The fundamental study will use canonical geometries to examine a wide range of Mach numbers, as well as shock wave strength and development, unsteadiness amplitudes and frequencies, and boundary layer development.

“A variety of fascinating phenomena will be investigated, ranging from modified turbulence characteristics from complex shock wave structure to altered thermal transport rates from local flow unsteadiness from different types of shock waves,” he says.

The researchers are developing new test sections and new nozzles for the wind tunnel especially for this investigation.

“The investigation will consider shock waves and shock wave trains, as they are modelled to represent similar phenomena within isolators of scramjet engines, transonic turbine blade tip environments, and within intake apparatus of aero-propulsion systems of high Mach number aircraft,” says Dr. Ligrani.