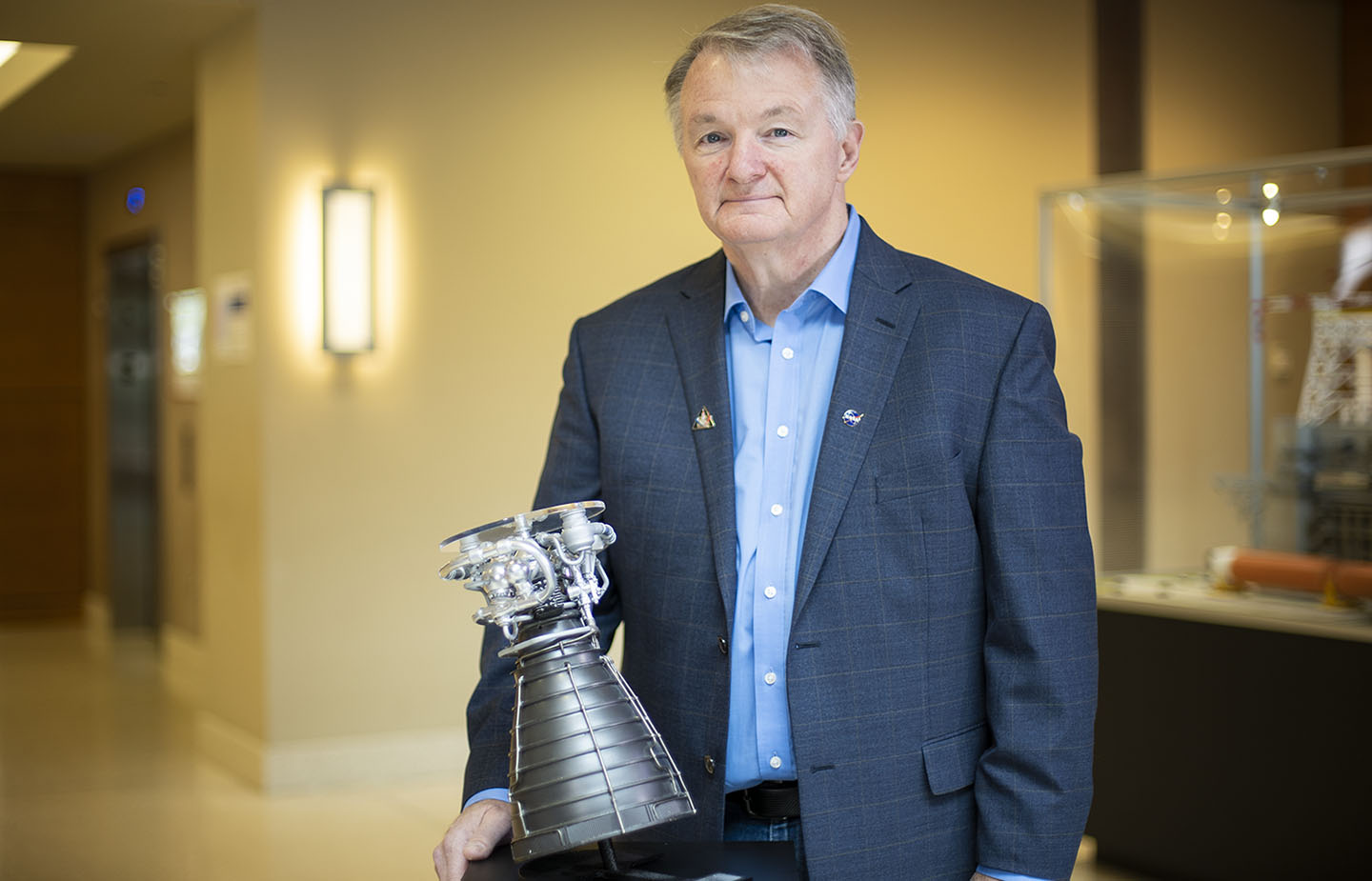 Nearly 50 years have passed since astronauts last walked on the lunar surface during the Apollo program. As the SLS Liquid Engines Manager at Marshall Space Flight Center (MSFC), Heflin (B.S. Electrical Engineering ’92) is responsible for overseeing a team that is developing, manufacturing and testing the RS-25 and RL10 engines that will power NASA’s super heavy-lift Moon rocket, the Space Launch System (SLS).

Heflin is responsible for managing an annual budget of over $500 million and a workforce of more than 1,000 civil servants and government contractors across the country to help usher in a new era of space exploration. Artemis marks the beginning of a historic collaboration between NASA and its commercial and international partners to establish humankind’s first long-term presence on the Moon, as well as provide a staging ground for America’s next giant leap: sending the first astronauts to Mars.

Heflin’s team has worked with NASA prime contractor Aerojet Rocketdyne to modify and ready 16 heritage RS-25 engines that will power the SLS on the first four Artemis missions. In addition, 24 more RS-25 engines are under production for flights beyond Artemis IV to help establish a sustainable human presence on the Moon. These engines will produce a maximum 8.8 million pounds of thrust, exerting more power than any rocket ever built, and putting the mass of reusable systems into deep space. And, thanks to advanced manufacturing technologies, the newly designed RS-25 comes with a 30% manufacturing cost savings compared to its Shuttle predecessor.

“Artemis is an amazing mission and SLS is an amazing rocket; both will really lay the groundwork for the human space program for a long time to come,” Heflin says. “The things that are going on today with SLS are unparalleled in my mind, and the national capability we are working toward is a generational rocket, being designed and built to be the heavy launch vehicle that will take us to the Moon and beyond.”

This time around, NASA is looking to tackle the journey to our nearest celestial neighbor through a series of missions, each with its dedicated SLS flight. The first three Artemis missions will establish the framework for what will eventually become a sustainable and long-term presence on the lunar surface. NASA is targeting 2024 as the Artemis III SLS flight that will return American astronauts to the lunar surface. Follow-on missions will focus on creating a permanent and sustainable outpost on the Moon’s surface, with a number of sustainable missions slated by 2028.

Heflin says that the responsibility of such an undertaking can be a daunting challenge, noting the unprecedented significance of a program that people will be cheering for all over the world. “It can be a bit intimidating at times, because it is so important to the United States and the world that we can develop this capability and continue to explore,” the UAH alumnus notes. 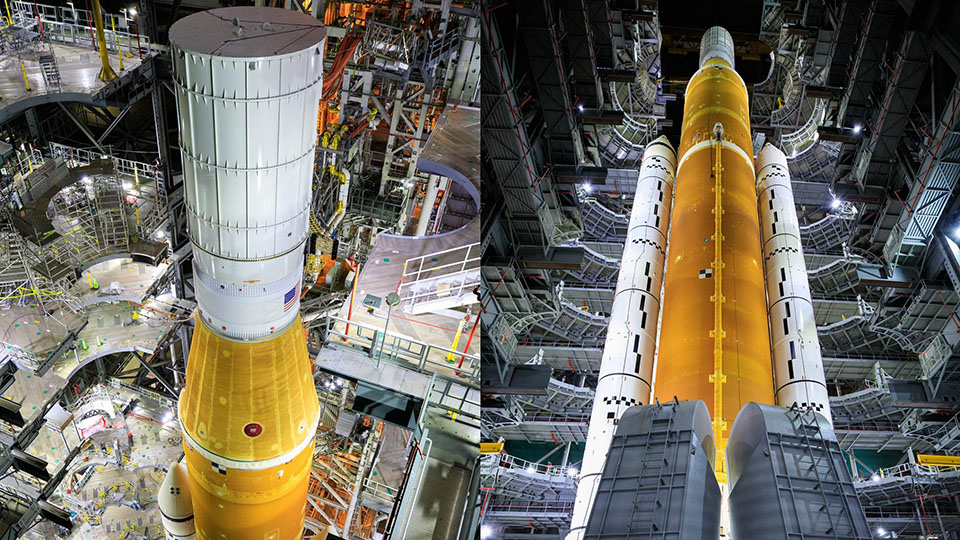 Completing first round of Artemis 1 pre-launch integrated tests prior to Orion stacking.

Hailing from Decatur, AL, Heflin recently celebrated his 31st year with NASA. He has been Manager of the SLS Engines Office since March 2020 and deputy manager since 2014. He joined the SLS Program Office in 2011 as RS-25 engine manager, responsible for all operational aspects of the RS-25 liquid rocket engine. He was the hardware management and operations manager of the Space Shuttle Main Engine Office from 2007 to 2011.

“I was born in early 60s, so I grew up like most kids in my generation watching the Apollo missions and Moon landings and was completely enthralled by what was going on,” he says. “But as far as what I’m doing today, it’s really kind of hard to believe, when you look back on it. Being a young kid from Decatur, to have been a part of such amazing things over my career, in a sense it’s like I’m watching someone else. I’ve been very fortunate to be a small part of some incredible teams accomplishing great things. I am truly honored.”

Heflin credits a special family member with providing him with encouragement and a sense of a work ethic that has stayed in him good stead all these years.

“I think the big mentor and influence has been my mom throughout my life,” he says. “Mom taught me about hard work and determination and setting your goals and working toward them. She was a longtime employee of Chrysler Manufacturing. She would come home and talk about all the electrical engineers and all the great things they did when I was a youngster, teaching me about hard work and what it took to be successful. Almost unknowingly she helped me make my decisions. She always cheered me on. Nobody was more proud of me throughout my career than she was.”

Heflin is quick to attribute his academic career as well with helping to provide the foundation he needed to set him on his path to space exploration.

“I think I was about 24 when I made the decision to go back to college,” he explains. “Being a local boy, UAH’s reputation in engineering, and all the contributions that UAH made with the Marshall team, really meant a lot to me. Personally, it was really just a win-win. It was home, and I could stay local and go to one of the best engineering schools in the southeast, if not the country.”

And thanks to those stories his mother told during her days working for Chrysler, the alumnus felt a special pull from a particular field of study.

“Listening to her talk about those electrical engineers, they were almost legendary,” Heflin notes. “And I always had a curiosity in design and electrical things as a small child, was always taking things apart to see how they worked. It all played into making it a pretty simple decision when the time came.”

Looking back on his days at UAH, rather than recalling one mentor in particular, he found help and encouragement coming from a myriad of different sources.

That day I got the phone call to become a UAH co-op student at NASA, that’s the day this all started, and really I wouldn’t be here today without the great opportunity UAH afforded to me.

“It was more of a team thing,” Heflin says. “The entire UAH staff, counselors, professors, administrative persons, were just terrific, always very, very helpful in resolving whatever issue I had or mentoring or counseling me. What classes to take, and reassuring me I could do it. Engineering school was tough! There were a lot of times in my academic career I thought, why am I doing this? Should I change majors? But they were really good in helping me stay the course and get through it. My mom taught me to work and not give up. And that played very largely in my ability to succeed. I wasn’t smarter than the other kids in school; I just outworked them.”

Heflin’s UAH connections proved crucial to his future development when it came to jumpstart his professional career as well.

“UAH was absolutely critical to getting this position. I got into the co-op program, and they helped place me at Marshall Space Flight Center. The first day I went to work, June 18, 1990, I processed in and went out to the propulsion test area. It was a fantastic place for an electrical engineer – like the largest electrical engineering lab! It really taught me how to get a job done in an engineering environment, which worked for the Shuttle all the way through to the SLS later. To be a part of propulsion testing was incredibly inspiring and motivational. When I started working there as a co-op, my grades actually went up! Just an additional push that really helped to motivate me as I finished up my engineering curriculum at UAH.”

In a career filled with many highlights, Heflin tends to recall certain special times that drove home the scope of what he and his coworkers were doing.

“I was completely humbled and blessed to be working with such great people on around 27 Shuttle launches,” he says. “Each was a powerful moment in my career. More recently, being a part of the SLS Core Stage Green Run test at Stennis Space Center was equally special. This test verified the performance of the actual Core Stage which will fly on Artemis I. It was also the first time four RS-25 engines had been hot fired at the same time. That was as big a moment of my career as any I have had. It put us on a path to deliver the final piece of the SLS vehicle to Kennedy Space Center and allow the team to begin stacking the Artemis I vehicle, which is well underway at this time. A massive accomplishment for the SLS and for NASA.”

One of the pivotal moments in his career came while in Florida to support a launch that forever emblazoned the importance of what he was doing with respect to the human side of space.

“I had worked many launches by that time, but this one was really significant,” Heflin recalls. “I was at the LCC [Launch Control Center] at Kennedy Space Center for a night launch. I watched as the van carrying the astronauts drove away and continued down the two-and-a-half-mile road to the launch pad. At that particular moment, as that van drove off into the darkness, it hit me like a ton of bricks, even though I had worked many launches, why it is so imperative that we do our job to the best of our ability. They were going to get aboard the Space Shuttle and put their lives into our hands! And it’s a point I’ve carried with me ever since, informing the team about the importance of technical rigor and technical excellence that must be the norm, that our engines must be perfect, to get the crew there safely so they can return safely to their families.”

Heflin has received numerous awards and honors, including a NASA Exceptional Achievement Medal, Outstanding Leadership Medal, Space Flight Awareness Award and the Silver Snoopy Award. He and his wife, Beth, have four children and reside in Huntsville.

“It’s very humbling and a great honor to be a part of it,” he says, reflecting on the future of the program and just how far he has come on this incredible journey. “That day I got the phone call to become a UAH co-op student at NASA, that’s the day this all started, and really I wouldn’t be here today without the great opportunity UAH afforded to me. I stand on the shoulders of many great, great people who came before me. My mission, my goal is to be as successful at what we are doing as those giants who came before me. My tenure at UAH put me on this path to where I am today. I’m proud to be a UAH alumnus!”