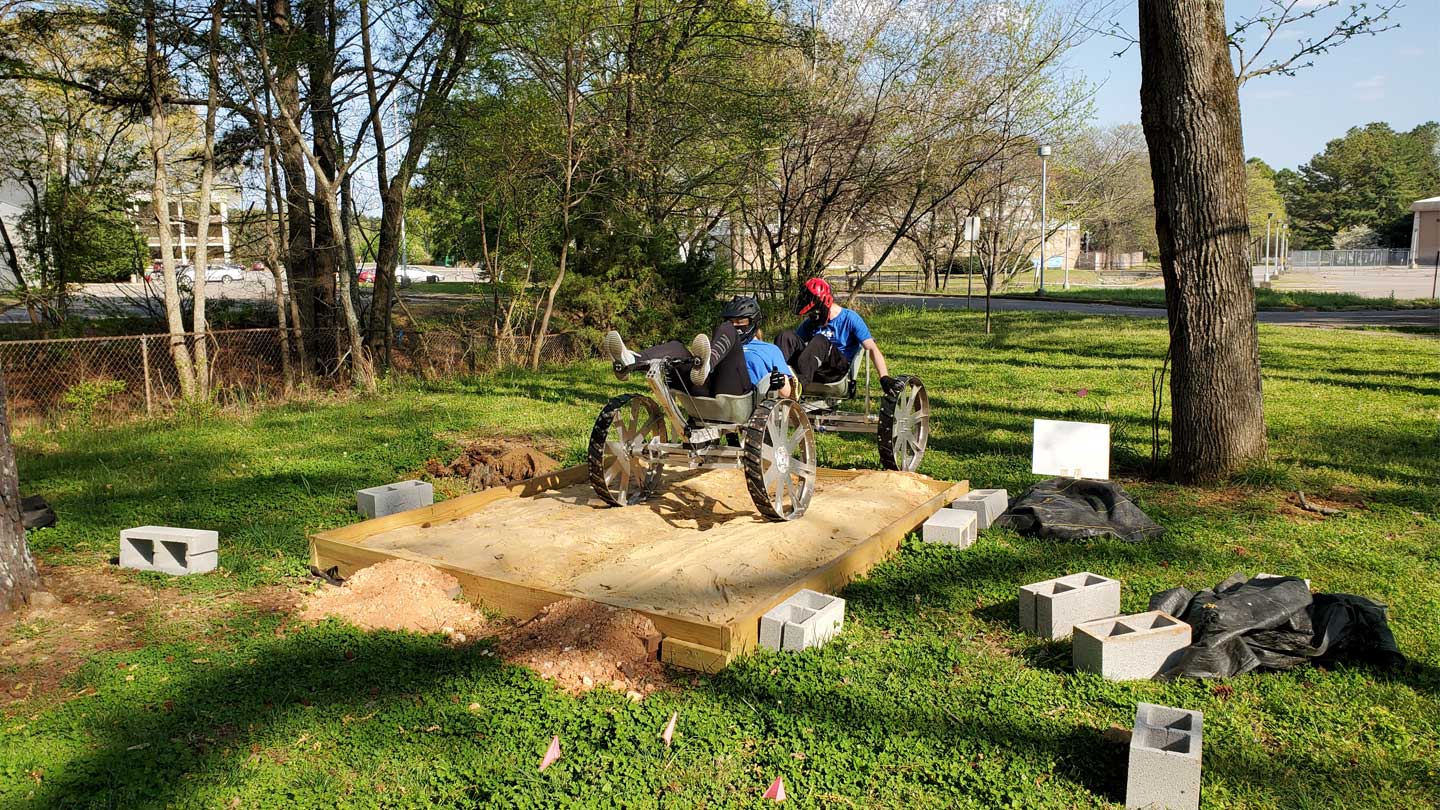 Susan Duron, in front, and Robert Lewallyn test the Falcon rover on the moon buggy course at UAH.

"The big change this year was NASA had to cancel their in-person event," says Twisted Metal Team and Financial Lead Michael Wexler, a senior in engineering from New Orleans, La. "Every year, teams from around the world come to Huntsville to compete in the Human Exploration Rover Challenge. With the travel and safety restrictions from Covid-19, that was not possible."

Virtual competition meant the teams would do all events online, including videos, pictures and status reports to NASA, says Falcon Team Lead John Baggett, a senior in mechanical engineering from Clarksville, Tenn.

"Even though we are getting this very rare opportunity to make our buggies look absolutely perfect, we have no idea how the Human Exploration Rover Challenge Committee will view them, since this is the first year that they have ever attempted it virtually," Baggett says.

Funded by the UAH College of Engineering and the Alabama Space Grant Consortium and supported by Prototype Development Specialist Jon Buckley at the UAH Engineering Design and Prototyping Facility, both teams are awaiting recognition in the awards ceremony on April 16.

Twisted Metal’s buggy design is articulated so that the front and back halves move independently of each other, Wexler says.

"This design reduces the stress in the moon buggy’s frame and allows us to have fewer reinforcements elsewhere," Wexler says. "This led to less material in the buggy overall, which cuts down on the weight and cost of the buggy."

Weight is important because the HERC competition has a weight scoring section where lighter buggies score more points.

"This is to simulate the real-world prospect of a buggy going to the moon," Wexler says. "A lower-weight buggy requires less fuel to launch into space, making it cheaper to send."

Team Falcon inherited its buggy from a previous student team and rebuilt it from the ground up, Baggett says.

"We have based the design concepts on pure simplicity. This is different from most of the other UAH teams because we have no major suspension components, a single speed, independent drivetrain and an extremely lightweight frame," Baggett says.

"Even though we are lacking in places where the other buggies might excel, the Falcon rover's low weight helps it excel," he says. "Plus, if anything breaks, it is simple to fix."

For the Twisted Metal team, the greatest design challenge was creating a buggy it was confident in while following NASA’s guidelines.

"To be eligible for NASA’s HERC competition, every rover can be no larger than 5 feet wide, it needs to be able to disassemble or fold to fit inside of a 5-foot cube, and you get points based on weight, with lighter buggies gaining more points," Wexler says. "They also need to be able to navigate the many obstacles on the competition course NASA builds each year."

One challenging obstacle is called Bouldering Rocks, a path of boulders that the buggy needs to be able to traverse without breaking.

"This did not sound like much of a challenge at first; the team just needed to reinforce the most common breaking points on the rover," Wexler says. "Suddenly our buggy is 30 pounds over the projected weight and the points we would gain for successfully navigating the obstacle are then lost because our buggy is too heavy."

Prioritizing the limitations NASA expected the team to follow "kind of felt like a tug of war, except there were five ropes tied together instead of just one," says Alex McLeod, Twisted Metal’s drivetrain and communications lead.

"I believe this is what makes the competition fun and what makes this a valuable senior design class," McLeod says. "We can all optimize any one system but optimizing every system is what every engineer aims for."

Wexler says the optimization effort was one of the most valuable lessons learned. "Anyone can optimize one system, but it takes a team to optimize all systems simultaneously."

For team Falcon, the drivetrain became an obstacle.

"The greatest challenge in redesigning Falcon was keeping the chains from slipping on the drive gears and keeping the rover from vibrating itself apart on hard surfaces," Baggett says. "This took a lot of problem solving – and mostly blue Loctite – to rise above the challenges of the course that this rover would eventually be traversing."

Even after all the additions made to Falcon, the buggy stilled weighs in under 150 pounds, which Baggett says is extremely light compared to the other rovers in the UAH fleet.

For testing, the teams made use of a temporary moon buggy obstacle track near Olin B. King Technology Hall that was built by students last year.

"It has shown areas of weaknesses on the rovers that were addressed, reworked or redesigned and improved," says David Fikes, a mechanical and aerospace engineering lecturer who teaches the class.

Work on a permanent on-campus testing and obstacle course near the WLRH radio station will begin soon, Fikes says. Meanwhile, the teams are planning an all-UAH race with at least six UAH-built rovers on the temporary course that will be closed to the public due to the pandemic.

"The students were willing to put in the time that it took to do the extra things that are required to successfully build a rover," says David Fikes, a mechanical and aerospace engineering lecturer who teaches the class. "They met a lot on weekends to get the work done. The pandemic didn't seem to slow them down that much. Some put in many, many extra hours to complete their project."

Designing, fabricating, assembling, testing and competing with a moon buggy is similar to real-world industry experiences students will encounter on the job, Fikes says.

"The many approvals, financial aspects, purchasing, etc., all take a lot of effort and time to accomplish correctly. Also, the importance of teamwork and meeting your commitments to your team are illustrated," Fikes says. "It is the most enjoyable thing that I do at UAH."

"Professor Fikes has been there pushing us from the very start," Baggett says. "He would never say this to anyone outside the class, but he is a very competitive person."