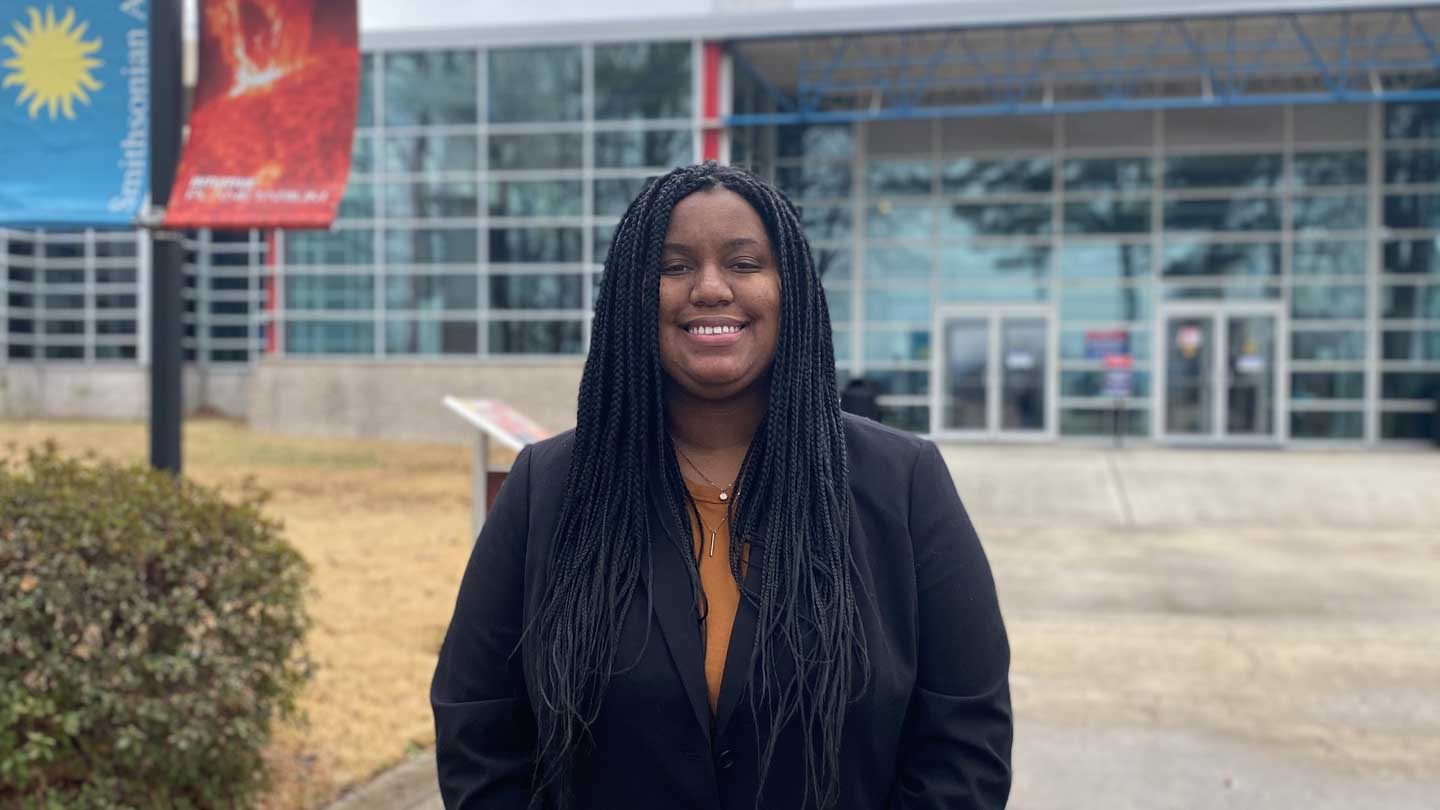 Megan Jordan is one of 43 Black undergraduate students selected nationally for the inaugural Patti Grace Smith Fellowship Class of 2021.

Megan Jordan of Mobile is one of 43 Black undergraduate students nationally who have been named fellows by the non-profit program that's helping to bring diversity to the U.S. aerospace industry. She will intern as a structures engineer at Hermeus Corp. in Atlanta, Ga., beginning in mid-May.

"I got a call from Tiffany Russell, who serves as the Mars Ascent Vehicle assembly, integration and test lead at NASA Marshall Space Flight Center. She informed me that I had been selected," Jordan says.

"It was shocking to me. The applicant pool was composed of brilliant students all around the U.S. with numerous accolades. Being selected made me even more proud of myself and the work I have been doing. I am excited to be a part of the Inaugural class of Patti Grace Smith Fellows and to inspire others to pursue similar opportunities in aerospace as well."

Each Patti Grace Smith Fellow is currently enrolled in the first or second year of a bachelor's degree program or in associate's degree program and earned a fellowship after a three-round selection process in which they were vetted by a group of aerospace industry professionals, rising-star early career employees and corporate employers.

"My friends at UAH and my family were hands on during the application process. They supported me from the beginning to end and I couldn't have gotten here without their help," Jordan says.

"I will be attending UAH while I pursue this fellowship," she says. "Internships are full-time so I will not be enrolled in summer school. I plan to resume classes in the fall of 2021."

Patti Grace Smith Fellows earn a challenging internship at one of the nation's leading aerospace firms, a living wage, two hand-picked personal mentors and a cash grant of approximately $2,000 to go towards professional or school expenses.

At Hermeus Corp., Jordan will support the structures team in designing ground test equipment and tooling for early-stage vehicle design.

"One particular reason I decided to apply for the Patti Grace Smith Fellowship is I wanted to use this summer to define my career and life goals," she says. "As a sophomore, it can be complicated to find meaningful engineering internships. By defining my goals this summer, it is my hope it will lead to a future that is more paved."

The Patti Grace Smith Fellowship was created in 2020 to combat underrepresentation of Black and African-American employees in the U.S. aerospace workforce. While African-Americans make up 13.4% of the US population and 15.3% of American undergraduate and graduate students, a recent study conducted by Aviation Week Network found that only 6% of U.S. aerospace and defense workers and only 3% of aerospace executives are Black.

The program's name was chosen to honor an aerospace industry leader who overcame a system of legalized racial segregation.

As a young girl, Patti Grace Smith (then Patricia Jones) was one of a dozen Black students to integrate Tuskegee High School, and was a plaintiff in a landmark case that integrated the public schools in Alabama, as upheld by the Supreme Court of the United States. Her career was highlighted by her role leading the Federal Aviation Administration's Office of Commercial Space Transportation in the early days of the nation's space renaissance.

"The Patti Grace Smith Fellowship exists to serve extraordinarily talented students who possess everything that is needed to thrive in aerospace, but who come from a community where talent has long been overlooked by our industry," says Col. B. Alvin Drew Jr. (USAF, retired), a two-time Space Shuttle astronaut and a co-founder of the fellowship.

"These new Patti Grace Smith Fellows inspire us with their drive, their intellect, their work ethic, and their deep commitment to advancing the state of the aerospace industry – not only in terms of our science and engineering, but also in terms of how we cultivate and honor talent in our workforce," Col. Drew says. "The level of interest we received from applicants, and the caliber of the students who've made it through three intense rounds of selection, show beyond a shadow of a doubt the incredible impact that Black excellence can, has, and will make in aerospace."