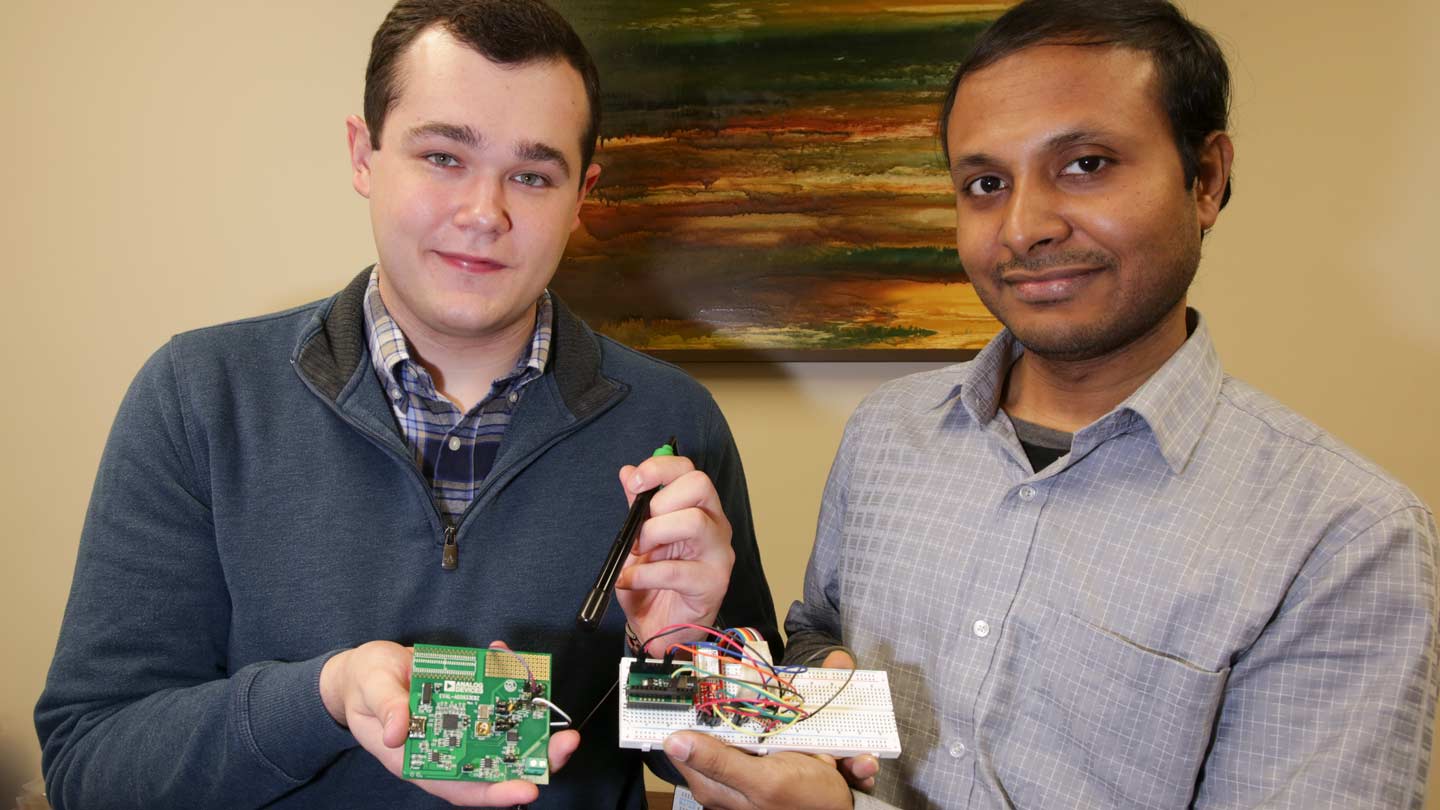 From left, senior Austin Fox and Dr. Biswajit Ray with the soil monitoring circuitry they are developing.

Development of a rugged continuous electronic monitoring device to detect soil fertility in farm fields could be a boon to agriculture in the United States and the United Kingdom (UK).

The ever-increasing price of fertilizers and environmental concerns about nutrient runoff make an inexpensive continuous real-time monitor cost-effective for farmers who desire to apply just what is needed to soils.

Dr. Biswajit Ray, an assistant professor of electrical and computer science at The University of Alabama in Huntsville (UAH) is a project co-principal investigator and is developing the system’s impedance analyzer board and its wireless platform.

His collaborators include principal investigator Dr. Suprem Das, an assistant professor of Industrial and Manufacturing Systems Engineering at Kansas State University and Dr. Saugata Datta, a professor in the Department of Geological Sciences at The University of Texas in San Antonio.

The proposed system’s board measures the impedance of the soil to detect the quantity of phosphorous as a marker for fertility.

"Phosphorous or phosphate is one of the three major nutrients in fertilizer – nitrogen, phosphorus and potassium – and is required for plant growth. It serves as an indicator for global environmental sustainability," says Dr. Ray.

"Phosphate ions have an electrical charge and hence are detectable by using electronic sensors. That is why this project focuses on phosphate ion sensing as the first step," he says. "Our hypothesis is that the soil impedance will depend on phosphate concentration."

The Signals in the Soil (SitS) research attracted $799,950 in the United States from the National Science Foundation (NSF) in collaboration with the U.S. Department of Agriculture.

UAH is working to develop the low-cost graphene sensor that’s the workhorse of the system so that it can be made using additive manufacturing techniques, Dr. Ray says.

"We would like to show with a proof-of-concept experiment that such a low-cost board can be deployed in the field for sensing purposes. We expect to deliver the proof-of-concept hardware by the end of 2021."

Additive manufacturing techniques would be the next step in scaling up production.

"The electronic board will be really inexpensive, costing less than $100, and that's why it is field-deployable," Dr. Ray says. "The idea is to insert the sensor-probe inside the ground and measure the soil impedance at different frequencies using the board."

Each board is equipped with a wireless platform that transmits data to a central facility. Over time, several boards in a grid across a field could provide a real-time map of fertility changes in different locations. That’s an advantage over manual fertility sampling, which only measures fertility at a set point in time.

"We think multiples of these boards can form a soil sensor network. The data that will be captured over time will be valuable information for enriching the soil quality in the future," Dr. Ray says.