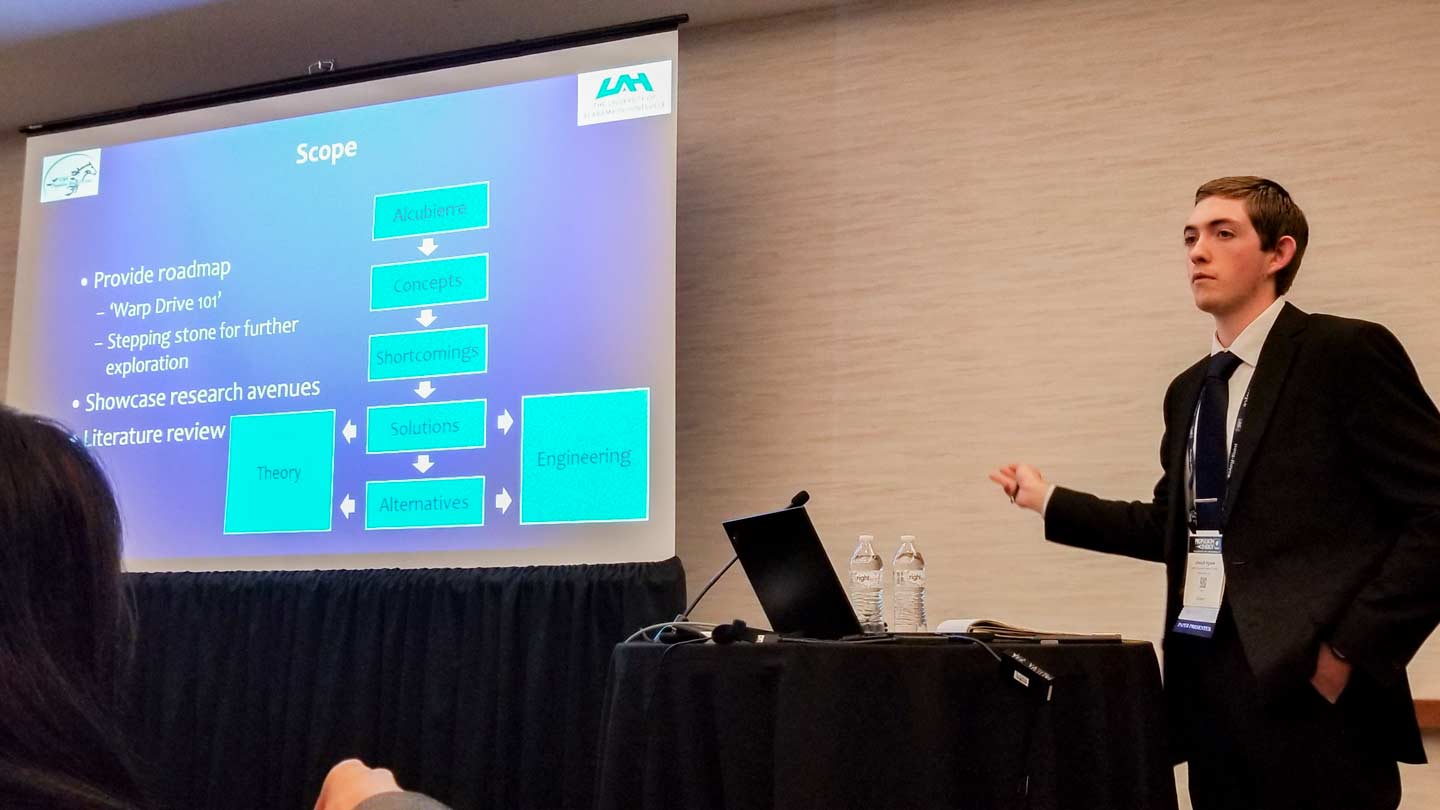 Joseph Agnew presents his warp drive paper at the American Institute of Aeronautics and Astronautics Propulsion and Energy Forum in Indianapolis, Ind.

If space is the final frontier, we’re going to have to boost our propulsion speeds to slip the bounds of our solar system.

Andromeda, our nearest major galaxy, is 2.573 million light years away. Light travels at 186,000 miles per second, so a light year is 5.88 trillion miles. Unless we dramatically step up our game, we’re stuck in the immediate neighborhood.

But what if science fiction offers us a possible answer? Warp drive. Engage.

Widely popularized by Gene Roddenberry in the 1960s TV series "Star Trek" and its successor, "Star Trek: The Next Generation," warp drive has also been seen onscreen extensively over the years.

But in reality, it’s not quite a simple as inventing dilithium crystals.

Since the 1990s, a community of scientists has worked on theoretical warp propulsion systems. Though light is considered the fastest possible speed, the theorized warp drive offers a potential way around this fundamental principle.

The idea is to warp spacetime, so that a craft enveloped in a "bubble" would be pulled along a fold in it.

"Mathematically, if you fulfill all the energy requirements, they can’t prove that it doesn’t work," says Joseph Agnew, a mechanical engineering senior at The University of Alabama in Huntsville (UAH) and an undergraduate research assistant with UAH’s Propulsion Research Center.

"Suppose you have a craft that’s in the bubble," says Agnew. "What you would do is, you’d compress space-time ahead of the craft and expand space-time behind it."

Agnew recently provided a standing room only crowd at the American Institute of Aeronautics and Astronautics (AIAA) Propulsion and Energy Forum in Indianapolis, Ind. with an overview of the state of the art of warp drive theory and the feasibility of a future working system, based on a paper he wrote. Agnew’s advisor is Dr. Jason Cassibry, an associate professor of mechanical and aerospace engineering.

"Someone actually came up to me after the presentation and asked, ‘Are you funded? Is UAH actually doing research on warp drive?’" Agnew says with a smile. The answer was no.

One such development was the discovery of naturally occurring gravitational waves by the Laser Interferometer Gravitational-Wave Observatory (LIGO), which Agnew says both affirms Einstein’s Theory of General Relativity and proves the natural existence of the basis for a working warp drive.

Could spacetime waves be the propulsion equivalent of electricity, a natural phenomenon that humans can exploit?

The field is where radio, television, radar, microwaves, computing, cellular communications, human flight, space exploration and travel by automobile all once were. It’s ahead of the current cutting edge, theoretically possible, but limited by its prodigious energy requirements and scalability issues as well as the current state of supporting technologies.

But even if it has doubters, that doesn’t mean it can’t be done.

"A perfect example is, one of the papers I was reading had at the end a list of quotes from many smart people who working on forward-thinking technological developments," Agnew says. "There was a quote from one of the Wright brothers, before they flew their plane, who said at that time he couldn’t see how people could ever be able to fly."

So, where to get the power? Current theory has certain positive and negative energy power requirements at about the size of the total energy of the mass of Jupiter, and Agnew agrees that sounds like an impossibly large hurdle. But then, the early energy estimates required the energy of the mass of the entire universe.

"People used to say, ‘You’re dealing in something that would be great, but it takes the mass of the entire universe to do it,’" Agnew says. "Now, we’re down to where, it is still an immense amount of energy and exotic matter is still a problem, but if we had that energy, we could do it."

The energy requirement reductions came after five to eight years of theoretical work, he says.

"It’s been reduced by many, many orders of magnitude."

Exotic matter is proposed as the primary method of maintaining the negative energy density required to produce the bubble.

But can a large enough effect be created to envelope a full-sized spacecraft, or is the size of the effect limited by its energy needs?

Scientists have approached that question by working from both directions, Agnew says.

Producing and replicating even a very tiny human-made wave in a laboratory would be a groundbreaking event akin to LIGO, Agnew says. The LIGO discovery proved that the necessary technologies are evolving.

"It’s really only now becoming a potential laboratory experiment because the technologies have now grown to the extent that they will support that level," Agnew says. "We’re limited now by the sensitivity of the measurement instruments and by the level of power required to do the experiment."

Supplying the power is becoming more feasible as bigger magnetic generators come online. A Tesla is a unit used to measure magnetic fields. In 2004, it was estimated that 20 Teslas of energy would be required for the experiment. Since then, generators producing as many as 49 Teslas have been built.

"That’s where, from the classical side of things, we are looking at large amounts of energy required to create even a very little reaction," Agnew says. Higher power would produce a larger and more easily measured effect.

On the measurement side of the experiment, Agnew says, "Of all the ideas out there, the one that appears to me to be more plausible is the interferometer."

Used in science and engineering, interferometers use two or more sources of light, the interference pattern of which can be measured and studied.

"If you have the ability to keep inputting more and more energy until you distort the spacetime field, you can measure that in the same way LIGO measured the gravitational wave field," Agnew says.

"What I’m hoping is that these experiments are like the efficiencies gained in vehicles, where we began with an internal combustion engine getting maybe five to 10 miles per gallon and now we are getting upwards of 40 miles per gallon out of that same-sized engine," he says.

"The initial experiment may be extremely difficult to do, and it may take a lot of energy to create a very tiny first result, but my hope is that as we refine it, we’ll get better."

Even a very small but reliable space-time warp could be coupled with nuclear propulsion to provide a significant boost to speed, some theorists suggest.

"One of the effects of being in the bubble is that it reduces the apparent mass of what’s inside," Agnew says. "In that case, even a marginal effect may increase the efficiency of other forms of propulsion."

As a high school freshman, Agnew’s interest in mathematics and engineering blossomed. His interest in warp drive was piqued by a "Star Trek" movie.

"I started looking at things from an engineering side, and wondering what it would take to make warp drive happen," he says. Googling the subject, he found the theoretical research.

"I was kind of ecstatic for awhile when I found those papers," Agnew says.

"You tend to see the same individuals contributing again and again to the field," Agnew says. "For most everybody, it is a sideline because the work is not well funded."

But if funding should arrive, he says he’d be interested.

"The interest in doing something in this field is going to be there if someone has the money," Agnew says. "This is just one of several areas I am interested in. If the opportunity is there to do it, I’ll pursue it."