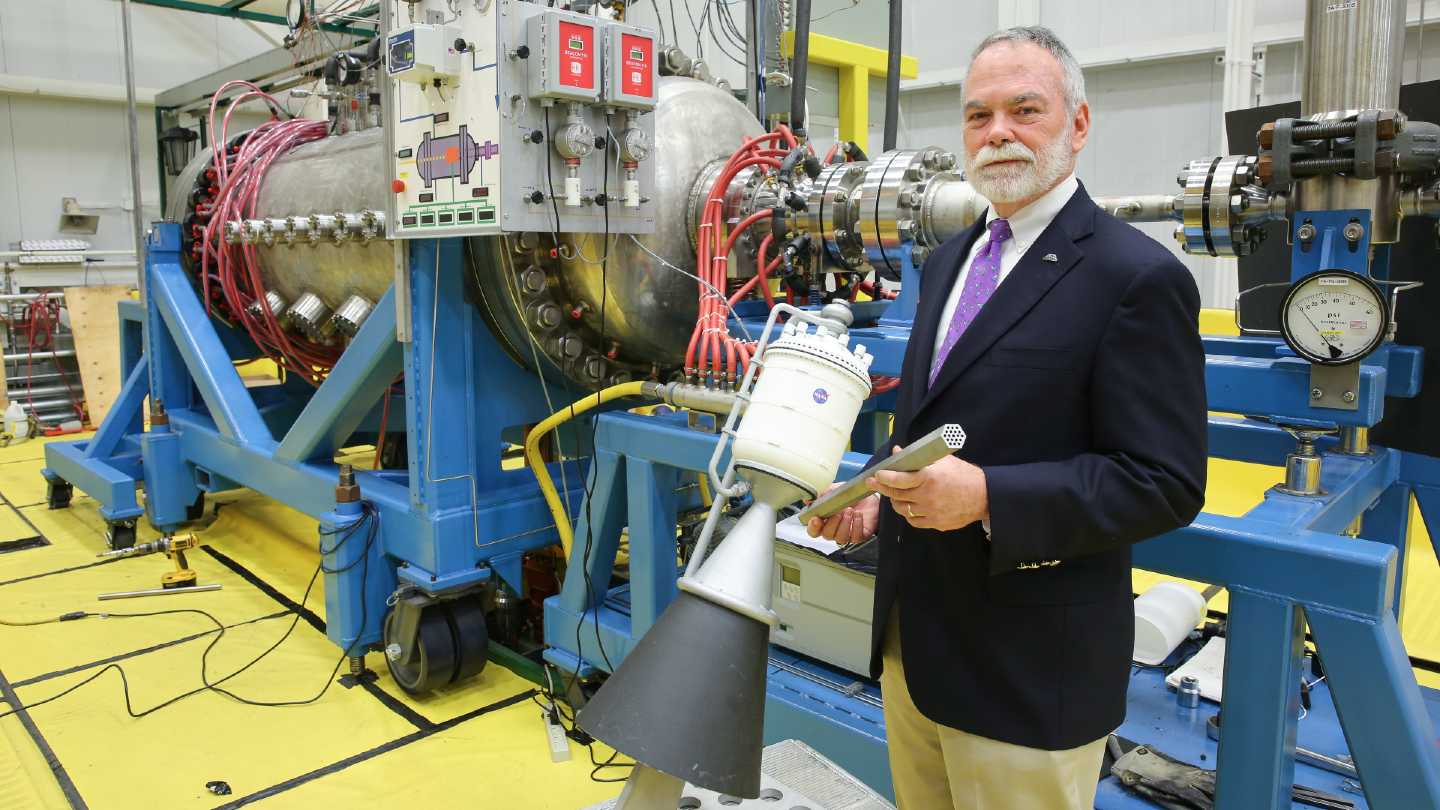 The Huntsville community is beginning to focus attention on Artemis I, the coming test launch of NASA's Space Launch System (SLS), and Dr. Dale Thomas, an eminent scholar and professor of industrial and systems engineering at The University of Alabama in Huntsville (UAH), will be watching with keen personal and professional interest.

SLS is the most powerful rocket NASA has ever built, and an engineering feat in which both Huntsville and Dr. Thomas have had substantial roles. Before joining UAH, a part of the University of Alabama System, from 2007-2010 Dr. Thomas served as the NASA program manager and the deputy program manager for the Constellation program, the SLS precursor.

As director of the UAH-based Alabama Space Grant Consortium (ASGC), Dr. Thomas currently marshals a statewide university effort to produce a student-built cube satellite (Cubesat) for launch every year. ASGC plans to propose a Cubesat mission to fly as a secondary payload on the Artemis III mission. If that’s successful, it could be the first student-built Cubesat ever to launch beyond low Earth orbit (LEO).

Getting that ride depends on successful Artemis I and Artemis II missions.

From 2005-2010, Constellation was NASA’s heavy lift program, and a lot of the technology developed then is incorporated in SLS now.

"My personal interest comes primarily from the relationships that I still have with a lot of the NASA and contractor personnel who continue working those projects," says Dr. Thomas, who is also a former associate center director (technical) for NASA's Marshall Space Flight Center (MSFC).

They are working incredibly hard to make sure that the SLS flies safely, and that we accomplish the Artemis I mission objectives – from which we will learn and make some course corrections for Artemis II and the subsequent missions.

Launch is expected to occur in early 2022.

The technological roots of the SLS family tree run deeply into the earlier Constellation program, which likewise took some of its cues from the Saturn V powerhouses that propelled Apollo back when the Beatles were on the charts. SLS is essentially the same rocket that was named the Ares V during Constellation.

“Yes, the technology investments made in the Constellation program will be in operation when Artemis I takes flight,” says Dr. Thomas, whose current research interests include systems complexity, systems integration, technical performance measurement and systems engineering planning and management.

"At the time, our focus was on the Ares I rocket, which was to be designed to get the flight crew to LEO, including the International Space Station (ISS)," he says. "So, we were working the Ares V as our follow-on, and as such had not gotten into final design and testing."

With the cancellation of Constellation and the decision to rely on commercial crew transport for LEO and ISS access, the engineering emphasis shifted to the SLS and missions beyond LEO – first the moon and then ultimately Mars. Both were also destination goals during Constellation.

In a change from Constellation, the Artemis service module has been developed by the European Space Agency instead of NASA, but when the manned Artemis II launches the crew will travel in a spacecraft engineered during Constellation – the Orion capsule.

Also, the huge liquid oxygen and liquid hydrogen tanks that dominate the SLS core stage were designed using a structural margin design approach that was modeled and tested during the Constellation program for eventual use on the Ares V rocket.

"As a result, the stage is significantly less massive than it would have been otherwise. And less mass in the structure means more payload to orbit!" says Dr. Thomas, who also is the deputy director of UAH’s Propulsion Research Center. "And those five-segment solid rocket boosters for the SLS core stage were developed during the Constellation program, originally for use as the first stage of the Ares I rocket."

Following a successful Artemis I launch, the Artemis program and SLS will be the ride that launches humankind out beyond Earth orbit.

"I am very excited to see SLS fly, because it will represent that first concrete step to getting back to the moon, where we'll learn to live and work beyond LEO before heading on out to Mars and the asteroid belt, and perhaps even the Jovian moons!" Dr. Thomas says. "It is a great time to be a young engineer."