A team of students from The University of Alabama in Huntsville (UAH) placed fourth in the 18th annual Chem-E-Car Competition®, hosted by the American Institute of Chemical Engineers (AIChE) and held on Sunday, Nov. 13, in conjunction with the AIChE’s annual meeting in San Francisco. More than 40 collegiate teams – including, for the first time, 10 international teams – participated in the competition, which requires students to design and build a small car powered by a chemical reaction and able to carry a specified load over a given distance and stop.

"It was the first time in 10 years that we qualified for nationals," says Katherine Peffen, a junior chemical engineering major who served as team co-lead with Brittany Lowe. "It came down to the line whether we’d even be able to go due to funding, so we have a lot of thanks to give the Department of Chemical Engineering, the College of Engineering, and the Student Government Association for helping us out."

In addition to Peffen and Lowe, the team comprised Stephen Morgan, Cameron Sawyer, Courtney Anderson, Hannah Kohler, and Brooke Stansbury, all of whom are members of UAH’s AIChE student chapter. As veteran members, Lowe and Morgan were part of the original cohort that initially designed and built ChargerTron for the southern student regional competition in Birmingham last March. Named as a homage to the "Transformers" movie, the car runs on a reaction between baking soda and vinegar. The CO2 that results is then channeled from the car’s pressure vessel to its steam engine, giving it the power needed to run.

"It was the first time in 10 years that we qualified for nationals."

It was that team’s fourth-place finish at regionals that ultimately secured a spot for UAH at the national competition in November. "And once the seniors on the team graduated, I took over as co-lead," says Peffen, who also sought guidance from the chapter’s faculty advisor, professor emeritus Dr. James Smith; chemical engineering professor Dr. Krishnan Chittur; and previous team captain, Landon Masoner. "He is still really passionate about the car!" she says.

With ChargerTron already built, the new team focused instead on getting the car to go the distance that would be required at the competition. "We knew it would be between 50 and 100 feet, so we produced a calibration curve for a variety of distances," says Peffen. They also figured out a new way to keep the chemicals from reacting too fast. "Before they had been rolling the baking soda in tissue paper, so we’d have to fill up the tank with the chemicals and screw it onto the flow control as fast as we could," she says. "That’s when a freshman team member came up with the idea of using a thicker material." 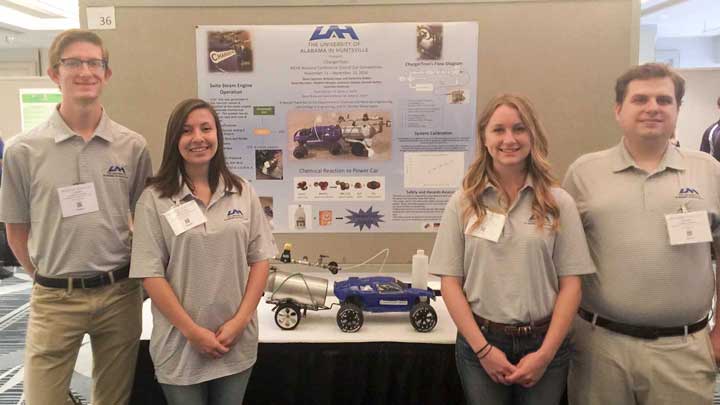 After that, the only challenge was getting the car to San Francisco; the Transportation Security Administration, needless to say, doesn’t look too favorably on airline passengers traveling with a pressurized tank. "Because we couldn’t have the chemicals in the pressure vessel when Dr. Smith took ChargerTron on the plane, we just bought them when we got there," says Peffen, adding that Dr. Smith also served as a judge at the competition. "That’s one reason why we went with a baking soda and vinegar reaction. Some teams who used more dangerous chemicals had to ship them to the competition and then were scrambling to find where they went!"

When the day of the competition finally arrived, the team – accompanied by both Dr. Smith and Dr. Chittur – was ready but nervous. "We were confident and we thought we had a chance, but it was intimidating," she says. Two runs later, they ended up coming in just 17 centimeters shy of the final distance of 56 feet, bested only by teams from the Korea Advanced Institute of Science & Technology, the Georgia Institute of Technology, and the New Jersey Institute of Technology. "We were super happy about it," says Peffen, adding that the team also received an award for having the most consistent distance between the two runs.

Now Peffen, who is currently serving as the vice president of the student chapter, has her sights set on the 2017 southern student regionals, which will be held in Knoxville, Tenn. And should the UAH Team once again qualify for the nationals? Peffen plans to be there as well. "I’m going to stay a member of AIChE after I graduate – it’s a great networking opportunity, and you can meet so many chemical engineers from all over at their national conference," she says. "But I will also come back and help!"