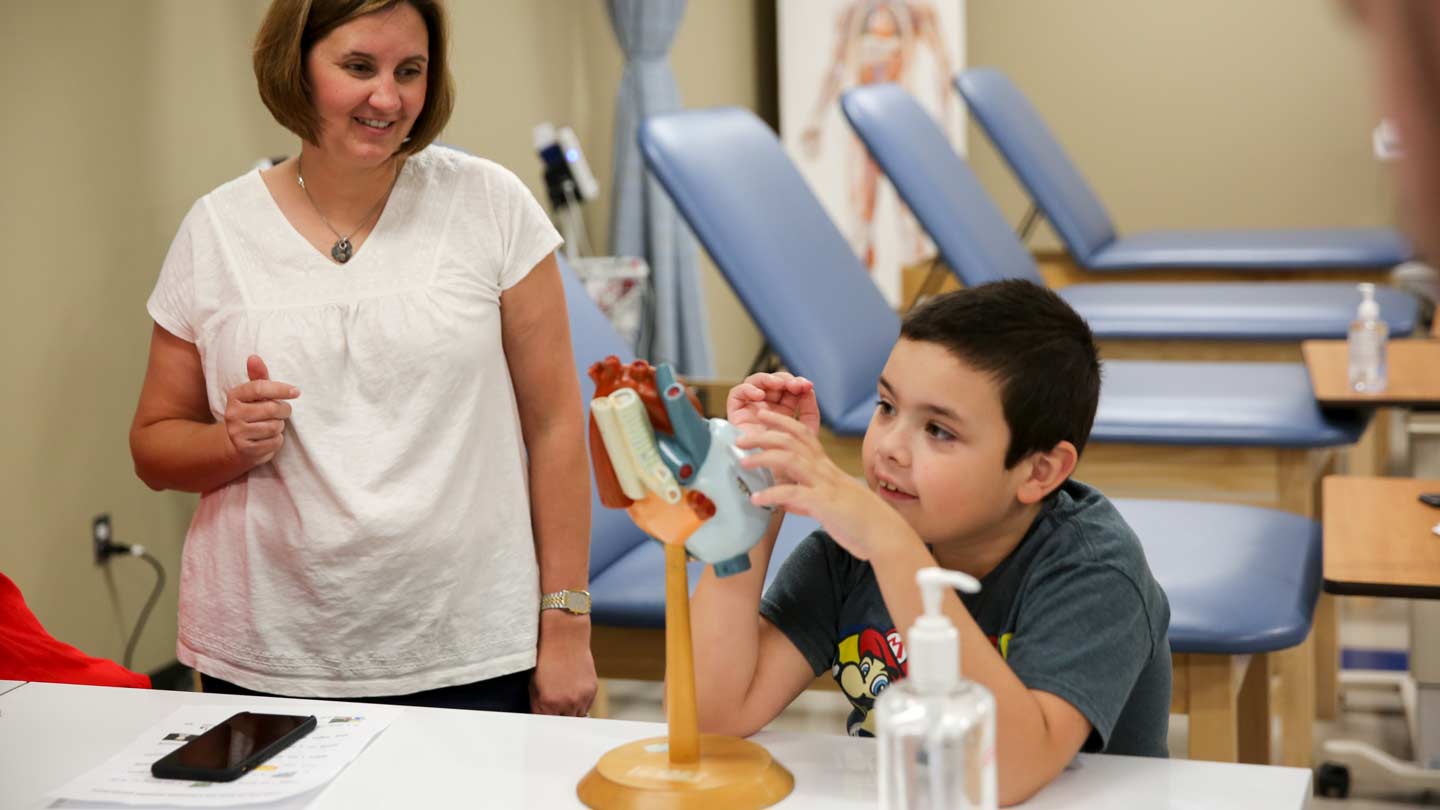 Dr. Whitney Meade, an assistant professor in the College of Education’s Department of Curriculum and Instruction, teaches EDC 660: Practical Applications of Visual Instructional Strategies, which tasks graduate students with creating and executing an appropriate and effective learning environment for learners with autism spectrum disorder.

Hands-on experience is an essential part of the curriculum at The University of Alabama in Huntsville (UAH) because it ensures that graduates have the skills necessary to hit the ground running as they embark on their chosen career path. But the rising popularity of online alternatives for existing degree programs means that instructors have to be a little more creative when it comes to creating opportunities for students to apply their classroom skills to real-world situations.

That was the challenge facing Dr. Whitney Meade, an assistant professor in the Department of Curriculum and Instruction, when the College of Education launched its Master of Education with a concentration in Autism Spectrum Disorder. "I felt strongly that we needed a practicum that would give students the opportunity to practice the skills they were learning in class," she says. So while the entirety of the program is offered online, there is a clinical component – EDC 660: Practical Applications of Visual Instructional Strategies – that requires students to create and execute an appropriate and effective learning environment for learners with autism spectrum disorder. 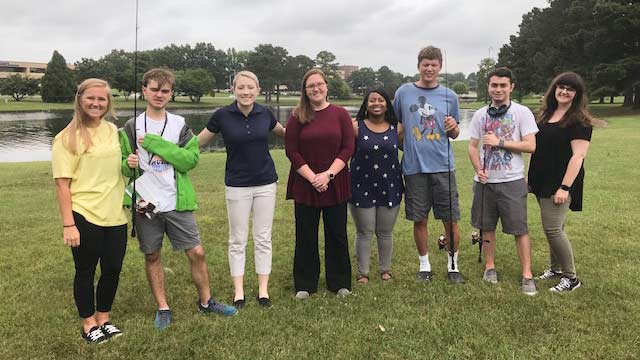 UAH graduate students in the course hosted a clinic for learners with autism spectrum disorder that included excursions to locations across campus, including a trip to the UAH lake.

The course takes place over five weeks during the summer semester. For the first three weeks, students learn how to organize schedules, develop materials, engage in instruction, respond to behavioral issues, and document student progress. "Something teachers are encountering more than ever in the classroom is a situation where one child can do the task completely as you designed it while another needs one extra support and another needs several extra supports," says Dr. Meade. "So we spend a lot of time on what differentiation means – how to take a skill, break it down, and then modify it to fit multiple skill levels." This "elaborate to-do list" is then organized in a way that lends itself to visual learners, with the end goal broken down into smaller, more manageable steps. "Because these students don’t always read contextual clues," she says, "we don’t leave things to be figured out or assumed."

For the last two weeks, the students host a clinic, or "educational summer camp," for a small group of learners with autism spectrum disorder using the techniques they’ve learned and materials they’ve assembled in preparation. "I’ve recruited several young adults with autism spectrum disorder whom I know or have taught so that students who are taking the course in person can participate in the clinic on the UAH campus," says Dr. Meade, a longtime advocate for the special education community who also serves as the director of UAH’s Regional Autism Network. "Distance students who are taking the course online can work with their local school system to set up their own clinic, but I push hard for them to take it on campus because I have a lot of control over who the learners are and I can mentor when needed."

This year, five students took the course in person: UAH alumnae Jasmine Brown, Nikki Burgos, and Caroline McAnally, as well as Rebekah Duvall and Taylor Scott. All are currently employed as teachers, and all are coping with the challenges and opportunities that having a class of diverse learners can bring. "As a second grade teacher, I’ve seen an increase in students who qualify for special services," says Brown. "So I felt like in order for me to be effective and help them, I needed to come back and get my master’s degree." Indeed, even those who already teach special education, like Duvall, were excited about the opportunity to expand their skillset. "I wanted to be able to meet my learners where they are," she says. "I felt like, if I could grow, I could help them grow." 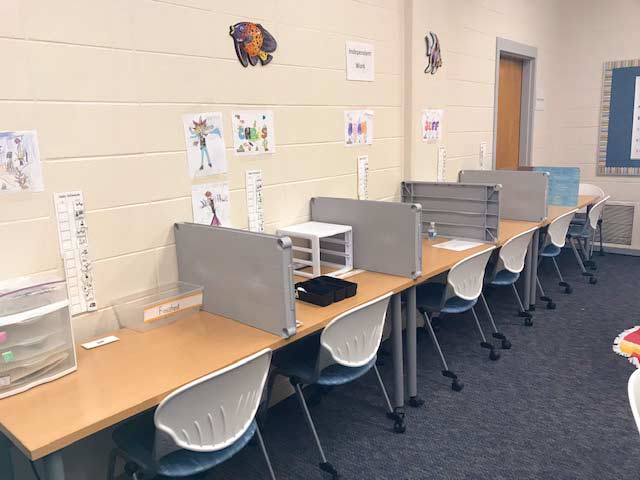 Independent work boxes like these, assembled by the course’s graduate students, allow learners with autism spectrum disorder to see what they need to do and in what sequence to do it without a lot of direction.

After preparing for the first three weeks of the class, the students welcomed a small group of learners with autism spectrum disorder from 8:30 a.m. to 12 p.m. each weekday morning of the two-week clinic. "Some days we used independent work boxes we had made," says Brown. "These allow them to see what they need to do and in what sequence to do it without having too much direction." Others, they practiced academic and life skills by visiting a variety of locations across campus, whether it was working on money skills by purchasing food at Dunkin’ Donuts or on social skills by playing games in Charger Union. "They also took a water safety class at the University Fitness Center, participated in a campus tour, went fishing at the UAH lake, and visited the College of Nursing’s Learning and Technology Resource Center," says Dr. Meade, who confesses to doing "a lot of peeking through the door crack and watching!"

In the afternoons, the students would reconvene with Dr. Meade, reviewing the efficacy of their approach. "We’d debrief and talk about how the lesson went, reflecting on what they did and what they could do to improve," she says. "That told me they’d gotten it, that they’d learned the skills and were using them effectively." The students would also share their own feedback each other, using their professional experience to offer different perspectives. "Everybody fed off of everyone else and was open to hearing and trying different ideas," says Duvall. "It flowed really well." Adds physical education (PE) teacher McAnally, "Online, you just get your comments in and you’re done, but here I felt like we heard what was said."

As with most things in life, however, what proved most impactful was not what went right, but what went wrong. For example, explains Burgos, "we were supposed to go to Dunkin’ Donuts, but when we got there it was closed, so one of the learners was very upset." Because they had forgotten the visual schedule that would have helped explain the situation more clearly to the learner, the students had to work to together to come up with an alternative that would both calm him and meet his needs. "We helped him ask his mom if he could go to Sugar Belle instead, and she took him," she says. "So that was a very valuable learning experience – problem solving when things don’t go as planned, as well as double-checking to make sure things are open and remembering to bring the schedules with us." 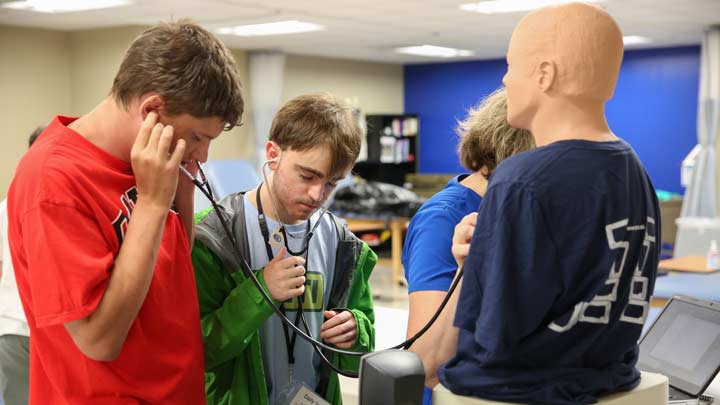 Another field trip enabled participants in the clinic to explore the College of Nursing’s Learning and Technology Resource Center.

With the clinic now over and the class complete, the students say that they feel more confident about their ability to meet the needs of their learners – and all are planning to implement what they’ve learned over the summer in their respective classrooms. "This helped show me what to do and why we do it," says Scott. "I’m fortunate to be able to start with a new classroom this year, so I’ll be able to share my knowledge and my increased understanding of special education." The same is true for McAnally. "My goal is to get kids moving," she says, "so I’m interested in using the visual schedule in my inclusive PE classes to help increase their physical activity."

That, of course, is music to Dr. Meade’s ears. Not only does it confirm her decision to add a practicum to the master’s program, but it also means that more learners with autism spectrum disorder will get the extra support and help they need to be successful in the classroom and beyond.