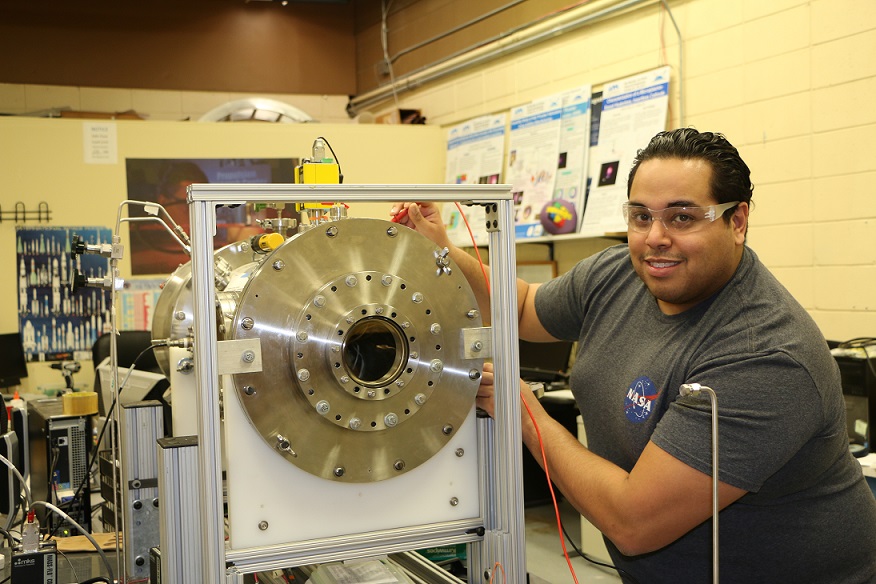 Roberto, a graduate student at the University of Alabama in Huntsville (UAH), had humble beginnings in New York City as the only child of a Peruvian hospital café worker and a Dominican sales representative.  As a child, Roberto enjoyed Latin dancing, playing basketball, and video games. He first recognized his passion for science at the High school for Environmental Studies in Manhattan, New York. He noticed that he easily understood math and science. “I think it was the Physics courses that opened my mind to how science plays into all of our lives every day. It seemed like an obvious choice to pursue engineering so that I can learn to apply science as needed”, said Roberto.

Roberto decided to further his newfound passion at Binghamton University in Binghamton, New York, where he received his bachelor’s degree in Mechanical Engineering. While an undergraduate student, he was offered an internship at Marshall Space Flight Center in Huntsville, Alabama, where he was introduced to rocket propulsion and became very interested in its capabilities. During his internship, he heard about UAH’s graduate program and decided to apply, and was accepted shortly afterward.

While attending UAH Roberto received his Master’s degree in Aerospace Engineering and he will soon be receiving his doctorate degree in Aerospace Engineering. When he was not working on his degrees, he was a tutor and mentor for the Louis Stokes Alliance for Minority Participation Program (LSAMP), he became involved in the Society of Hispanic Professional Engineers, and he was able to help lead the Salsa Club on campus. Roberto received financial support from the UAH Adriel D. Johnson, Sr. Fellowship and NASA for his graduate studies and he was recently awarded a graduate research assistantship (GRA) through the Central Education, Recruitment, and Impact Fund (CERIF) of the NSF EPSCoR CPU2AL project.

In Roberto’s Ph.D. project, he uses concentric split-ring microwave resonators to produce plasmas at vacuum pressures with the goal to understand the characteristics of the generated plasma. Such plasma could find applications in space propulsion and plasma treatment of solid-state materials, biomaterials, plants, seeds, and agricultural products. He computationally models the electromagnetic behavior of the resonators and compares it to experimental measurements of the plasma density and electron temperature with Langmuir probes.

When asked why do you love what you do Dextre replied, “As an undergrad, I learned the basics of plasma and propulsion. As a master’s student, I studied and mastered that knowledge. Now as a Ph.D. student, I get to give my input and add to the greater body of human knowledge in this area. I would tell students interested in studying plasma sciences or propulsion to understand that there is a lot of information out there, but don’t be intimated by it. If it is your passion, pursue it.” Roberto also emphasized the importance of finding the right mentor. “I would like to thank my mentor Dr. Gabe Xu, member of the UAH CPU2AL EPSCoR project as well, for his continued support throughout my UAH career.”

After graduation, Roberto plans to take a short break to travel and spend time with his family, after which he will start working for private industry.