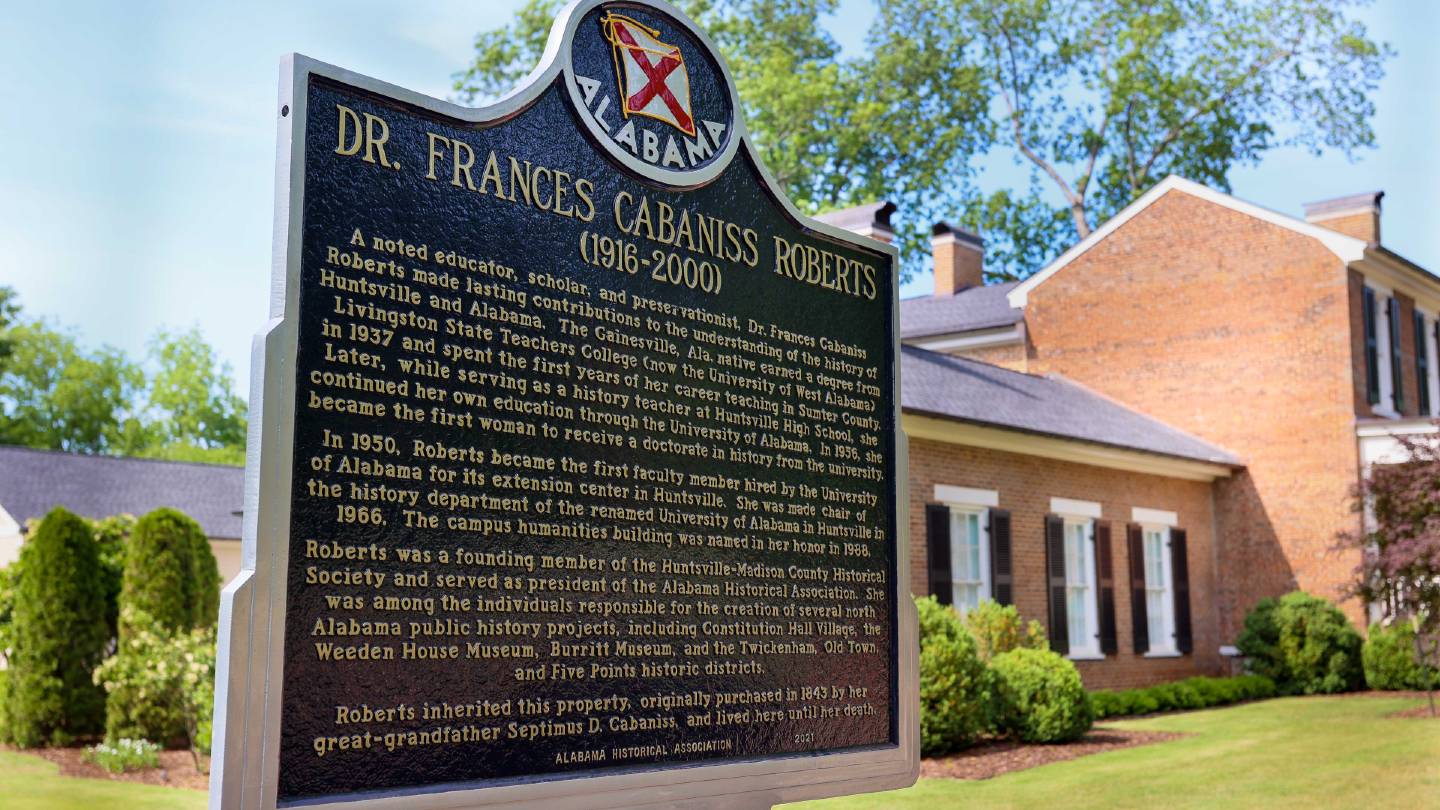 Dr. Roberts’ legacy as an educator and historic preservation advocate is what led the Historic Huntsville Foundation, City of Huntsville and Huntsville-Madison County Bicentennial Committee to honor her with a historic marker at 603 Randolph Avenue, Dr. Robert’s ancestral home, known as the Cabaniss House.

The marker was unveiled on May 6 by the Historic Huntsville Foundation and the Huntsville-Madison County Bicentennial Committee to celebrate the historian, author, preservationist and teacher. The program was highlighted by remarks from Huntsville Mayor Tommy Battle, UAH Interim President, Dr. Charles L. Karr, and long-time Madison County Attorney, Julian Butler. 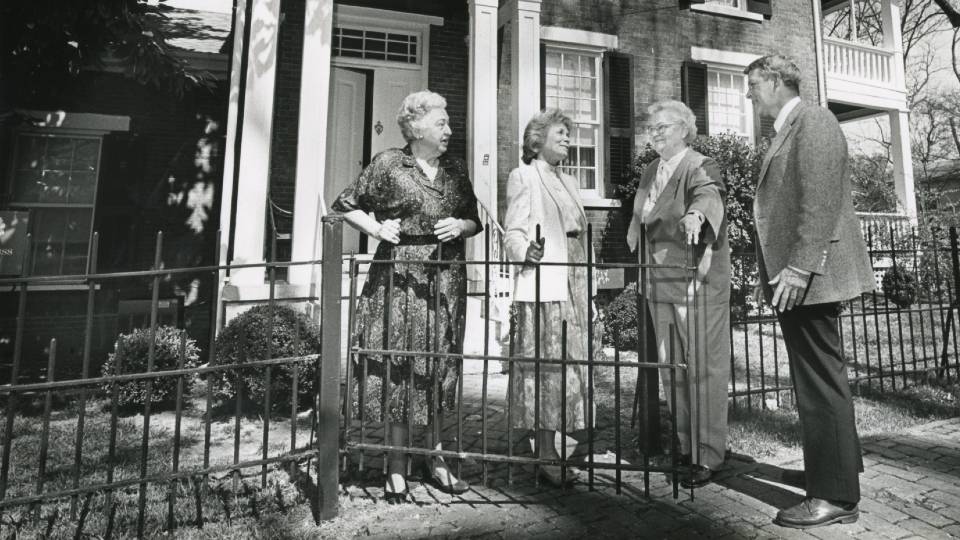 Growing up in Sumter County, Dr. Roberts knew at an early age that she wanted to be a teacher. As a young adult, she pursued that dream, earning a bachelor’s degree from Alabama State Teachers College (now the University of West Alabama) and a master’s degree from The University of Alabama. She first taught in the Sumter County Schools before coming to Huntsville to teach for 12 years in the public schools.

As an educator, she continually broke new ground for women. Dr. Roberts was the University of Alabama Extension Center’s first full-time faculty member in 1950. Her love of history and professional development sparked her return to academia and the pursuit of her Ph.D. In 1956, she became the first woman at the University of Alabama to receive a doctorate in history.

UAH Interim President Charles L. Karr’s remarks at the ceremony lauded Dr. Roberts’ 30 years of dedicated service to the University. The historian applied to teach at the University of Alabama Huntsville Center in 1949 and was one of the initial faculty members when the school opened in 1950. She advocated for a separate Department of History and became its first chairperson in 1966. She was instrumental in restructuring the Huntsville Center into the independent University of Alabama in Huntsville in 1969. 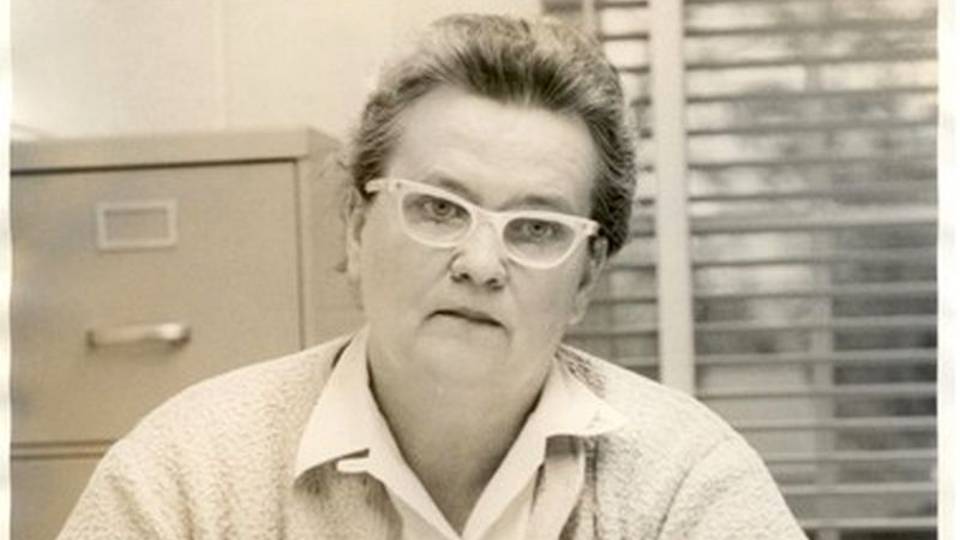 When the Extension Center became UAH, Dr. Roberts established the History Department, serving as its chair until 1970, and her highly influential dissertation, Background and Formative Period in the Great Bend and Madison County, was published in celebration of Alabama’s Bicentennial. The book remains a seminal work on the settlement patterns of Madison County and Alabama’s early statehood history, and proceeds from book sales benefit the UAH Frances Cabaniss Roberts Scholarship fund, awarded to outstanding history majors.

UAH’s first president, Dr. Benjamin Graves, once called Dr. Roberts “one of the key lanterns that lit this place. She was a great historian to begin with and also a woman of vision. She was just a tremendous person.” The historian was also the founding Director of the UAH Academic Advising and Information Center.

Her love of learning from and preserving the past motivated her to become an authority on regional history. As Huntsville pushed into the space age, Dr. Roberts worked relentlessly to ensure the city’s rapid growth did not come at the expense of its historic buildings and neighborhoods. She was a founding member of the Huntsville-Madison County Historical Society, president of the Alabama Historical Association and, along with local architect Harvie Jones, wrote the nomination that created the Twickenham Historic District. Dr. Roberts helped save Weeden House and saw it become a museum, and she played a role in the founding of Alabama Constitutional Hall Village and Burritt on the Mountain as well. 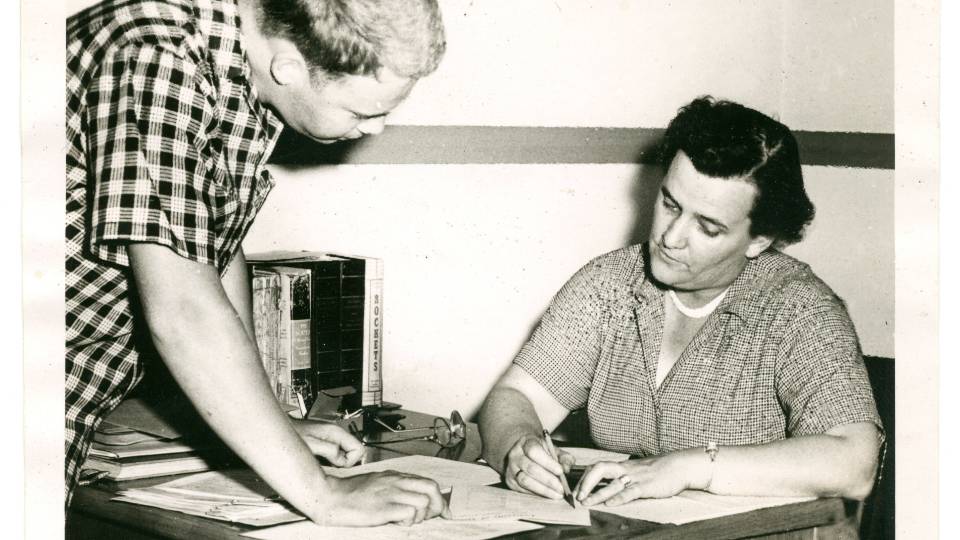 In 1978 the educator and preservationist received the Alabama Award of Merit for Outstanding Service in the Preservation of Alabama History. UAH dedicated the Humanities Building on campus in her honor, naming it Roberts Hall in 1988. The Alabama Women’s Hall of Fame inducted her into their ranks in 2013. To further honor her legacy, UAH faculty and students created a traveling exhibit, Dr. Frances C. Roberts: Her Life and Legacy.

A prolific collector of historical materials, Dr. Roberts has voluminous archival collections maintained at three universities: The University of Alabama, The University of Alabama in Huntsville and the University of West Alabama. Her collection of papers donated to UAH’s Special Collections and Archives is a treasure trove of information for anyone with an interest in Alabama history, known as the UAH Frances Cabaniss Roberts collection. This archival collection documents Huntsville and Madison County history from the late 1700s to the early 2000s, and is a gold mine of genealogical and local history research.

After being diagnosed with Guillaine-Barre Syndrome, Dr. Roberts retired from UAH in 1980, earlier than she would have liked, but by that time she had already had an immeasurable impact on thousands of students. When she passed in 2000, the same could be said for the Huntsville community, thanks to a lifetime of service and tireless advocacy.