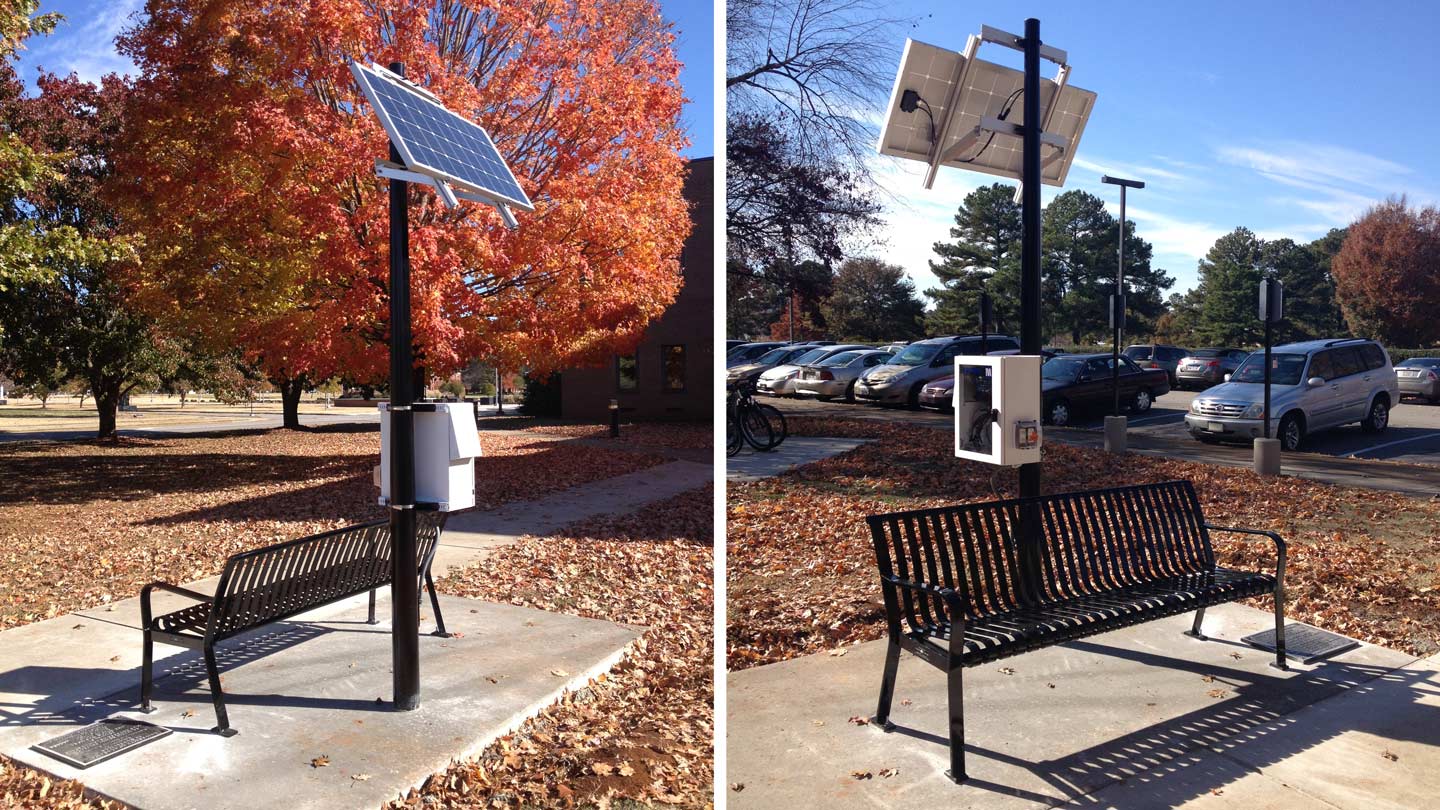 A team of electrical engineering students at The University of Alabama in Huntsville (UAH) has built and installed a solar-powered charging bench (SPCB) at Charger Way and John Wright Road. A ribbon cutting to celebrate the new addition to campus will take place on Tuesday, Nov. 25, at 11 a.m., after which the bench will be available for public use.

Powered by renewable energy, the SPCB will provide a place for students, faculty, and visitors to easily charge their mobile devices while enjoying the outdoors. The students involved – Patrick Doyle, Ashley Johnson, Beverly Martin, and Donna Baughn – created the bench for their senior design project, a requirement of UAH's electrical engineering undergraduate degree program.

The team's goal, says Baughn, was to design something that would "not only reflect our passion for giving back to the community and contributing in a positive way, but would also use renewable energy." Dennis Hite, a lecturer in the Department of Electrical and Computer Engineering, served as an advisor to the group, known collectively as "The Bench Warmers." The project also received invaluable support from two community partners, Jacobs and TVA.

We hope that our project might bring more awareness to the ways that people can use renewable energy in their lives.

Johnson, who served as The Bench Warmers' Research Lead, calls the result a "win-win," particularly when you take into account that 90% of American adults own cell phones, tablets, and laptops – all of which need recharging. "Now people can take a break from their busy lives and enjoy the nice weather we have in Huntsville, all while sitting outdoors and recharging their personal devices," she says.

The Bench Warmers also hope that those who use the SPCB will be inspired to consider renewable energy alternatives in their personal life. "We have designed our project so that people can easily see the components that make up a solar-powered energy system," says Beverly Martin, the project's Hardware Lead. "We hope that our project might bring more awareness to the ways that people can use renewable energy in their lives."

Adds Team Lead Patrick Doyle, "we think the SPCB will be a novel addition to the UAH campus and stand as a representative of the excellent education we have received from the UAH's Department of Electrical and Computer Engineering." And maybe one day, he says, "charging stations like ours will be commonplace in parks in Huntsville – and around the world."