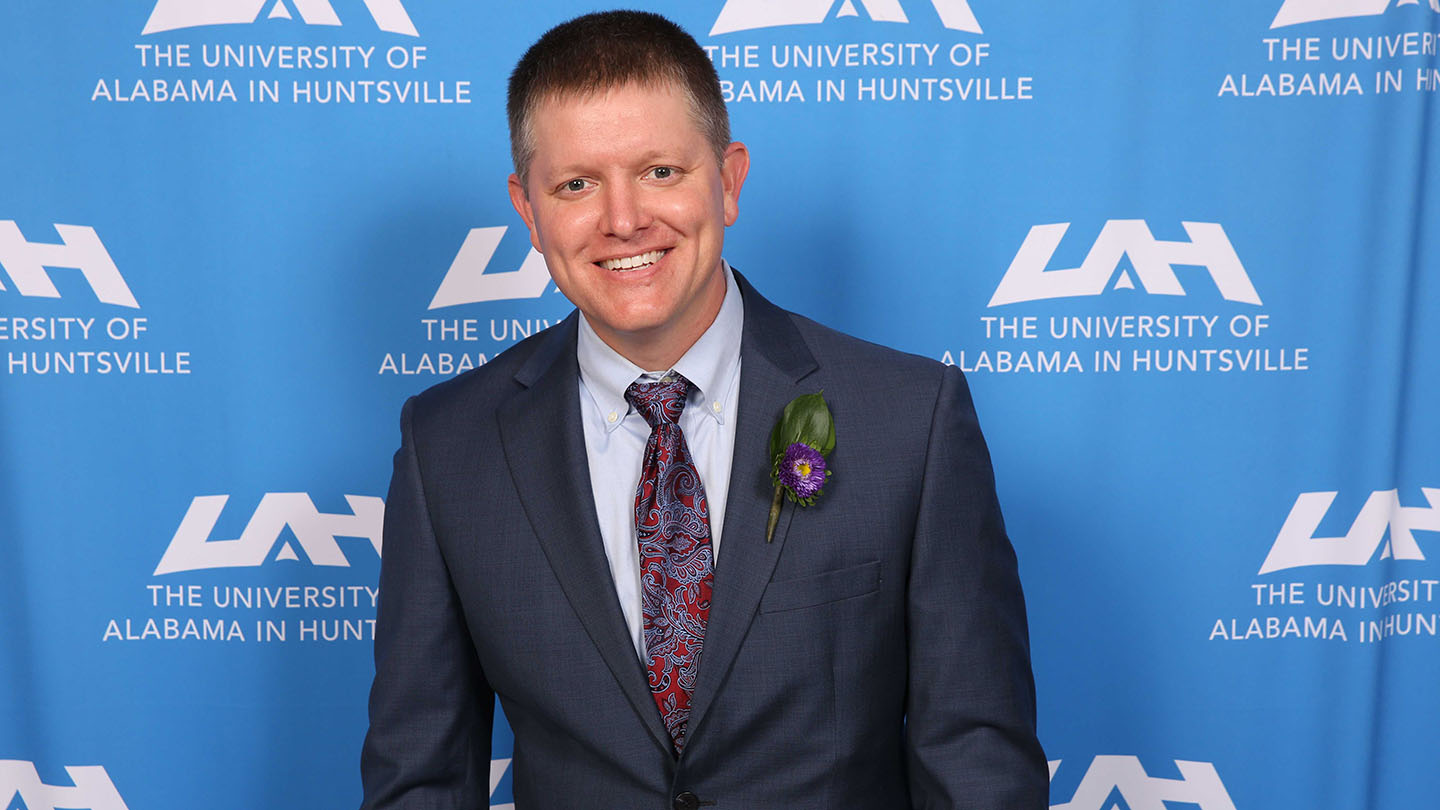 Sandlin is studying for his doctorate in mechanical engineering, also at UAH, and is currently employed as an engineering contractor for ERC in Huntsville, a company that provides technical support to the defense and aerospace industries. Though he’s best known for the educational video series he created and hosts, Smarter Every Day (SED), a YouTube phenomenon that makes science accessible – and fun – for those curious about the way things work. Since its debut in 2011, the series has exploded in popularity, recently notching episode number 267.

“I’ve always been a ‘tinker-thinker,’” Sandlin explains. “I really enjoy exploring and learning stuff. I was working as an engineer, and at night I would work on things in my garage, like trying to recreate Dr. Harold Edgerton’s photos.” Harold Eugene “Doc” Edgerton was a scientist at the Massachusetts Institute of Technology who transformed the stroboscope from an obscure laboratory instrument into a popular device for making stroboscopic photographs.

The UAH alumnus soon discovered he had a real talent for elucidating how things work on camera that became the impetus for launching SED.

“I got my wife a laptop one Christmas that had video editing software,” he says. “It was fun, and I really enjoyed explaining things!”

Sandlin has deep ties to the Huntsville area, and it’s obvious to see that his thirst for knowledge of the world around him runs in his bloodline.

“My grandfather, Pryor Wilson Sandlin, worked for the Army Ballistic Missile Agency and worked for von Braun,” he says. “He was a drafter. My dad worked at what was Saginaw, now Delphi, in Michigan. Mom worked there as well as a line worker, and my dad worked in tool and gauge. He has been a tinker-thinker his whole life. He would always ask me interesting questions. He and I used to build all kinds of stuff.”

Another important step on this journey that ultimately led to SED and communicating science to the public came when Sandlin attended the state of Alabama technology fair in 1994 when he was still in high school.

“I was really involved in Science Olympiad, which I’ve actually judged at UAH, in high school. I really enjoyed it, but I had no idea what an engineer was,” he admits. “Then the guy who lived across the street from me, Gary Lieberg, introduced me to the concept of engineering. He said you might enjoy it. I went to high school in Hartselle, Alabama, and they had an Engineering Day where you could shadow an engineer at the local manufacturing plant. I went to that at Copeland and shadowed an engineer. He was fixing an automatic lathe that day, and it was really interesting!”

An especially vital nudge came from an unexpected source that ultimately led Sandlin to UAH.

“I was working at Redstone Test Center, and my boss was James Johnson,” he says. “His wife, Sharon Johnson, still works here [the director of the UAH Center for Cybersecurity Research and Education]. Her husband pulled me into the big office one day and said, hey, what is your future like? What do you plan on doing? And I said, I don’t really know, and he said, have you considered going to grad school and getting your master’s? And I said no, I wasn’t even interested until he said that, with that one conversation. I’m very appreciative that he decided to invest in me.”

Sandlin made several important connections at UAH while studying for his master’s, including Dr. Robert Frederick, director of the UAH Propulsion Research Center.

“Dr. Frederick is awesome, and he spent a lot of time with me,” he says. The alumnus also developed a special friendship with Dr. Jeffrey Evans, a professor of aerospace and mechanical engineering at UAH, who unfortunately passed away after a brief illness in 2014. “We were buddies,” Sandlin says. “And when I started at UAH for my Ph.D., which is what I’m working on now, I worked with Dr. Kavan Hazeli, a great guy.”

In describing what he does at SED, it’s difficult to depict a “typical” day in the life of a “science communicator.”

“There are so many different things that happen,” Sandlin says. “For example, the last week I’ve been chained to the editing desk doing a video with the Coast Guard. The editing was difficult, because there were certain things, like their hotline board, that they couldn’t have going out to millions of people. Other days, I get to go explore something crazy, like a supersonic baseball cannon. You never know.”

Sandlin is especially cognizant of the fact that he’s often getting to observe or experience aspects of life that few other people might be privy to.

“Later this week I’m going up to New York to the Kodak plant to learn how film was made,” he says. “I feel very fortunate to have access to this sort of stuff. I try to remember that, to give other people access to the things I have access to. I think, oh wow, they’re going to let me see this! I feel a great responsibility to capture it well and tell the story. Like if I‘m given access to the Coast Guard command center in Mobile, I get one shot at this, and I need to tell the story well.”

One might wonder if he ever experiences stage fright knowing his work is going to be seen by untold multitudes of viewers.

“I’m just a bit of an extrovert,” Sandlin says. “What I like is the research of the thing – I don’t really care for the other aspects of it. I’m not trying to be a ‘Youtuber,’ I’m not trying to be public or anything like that, just genuinely interested in exploring things. I’m just naturally curious. People can tell when you genuinely enjoy what you are doing. I have no interest in being famous, all the trappings that come along it. I think people can tell that.”

But is it ever daunting, realizing he’s providing content to a Youtube channel that now boasts 10 million subscribers?

“Kinda crazy, isn’t it?” Sandlin says with a smile that says he almost doesn’t believe the way SED has taken off himself. Considering the success of his work, where does this self-styled “tinker-thinker” see himself in the future?