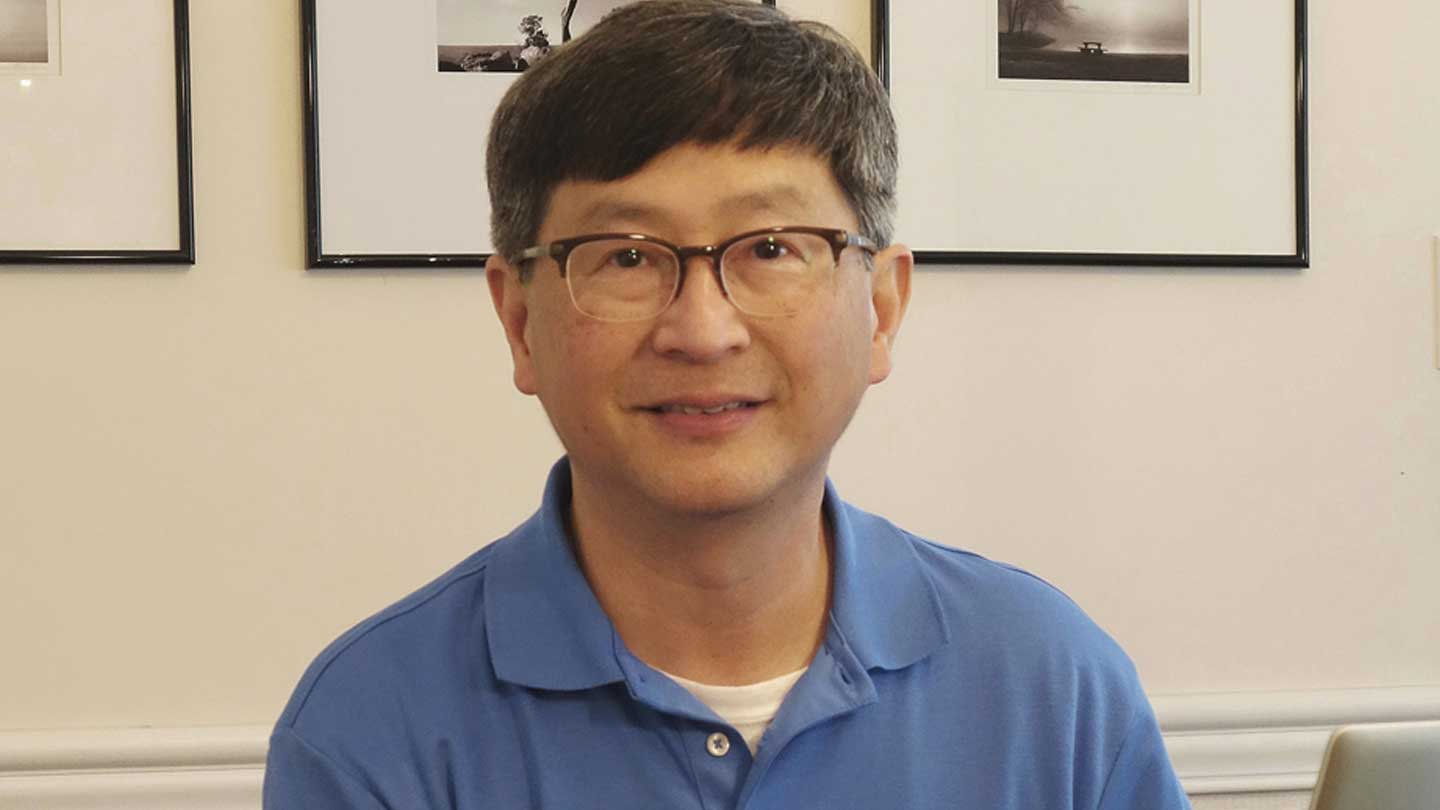 Lee earned his B.S. and M.S. degrees in mechanical engineering from UAH in 1982 and 1984, respectively. He joined Marshall Space Flight Center (MSFC) in 1988, and since 1990 has worked in the Materials and Processes Laboratory’s Metallic Materials Division. An avid inventor, he co-invented NASA 398, a lightweight, high-strength aluminum alloy suitable for high-temperature applications in everything from outboard motors, motorcycles, scooters and Arctic Cat snowmobiles to blades in emergency ventilation fans in underground streets and traffic tunnels in cities across the globe. Lee has supported NASA’s space flight programs as well, including the Orion Launch Abort System that will be part of the Artemis I and II lunar missions. The inventor was inducted into the Space Foundation’s Space Technology Hall of Fame in 2018.

But it was the tragic events of 2020 that have driven the alumnus to create the innovations that are likely closest to his heart. Last spring Lee’s father, David V. Lee, was hospitalized in critical condition and later succumbed to the virus. Due to hospital safety protocols, the elder Lee was not allowed visitors and died alone. When NASA requested suggestions to help fight COVID-19, his son seized on the opportunity to channel his grief and shock into ingenuity, submitting six ideas aimed at combating the virus.

“My inventions explore the usage of novel sterilization techniques from certain electromagnetic wavelengths and anti-microbial materials,” Lee explains. “These ideas are relatively low-cost methods to kill many common bacteria and virus, including COVID-19, and to prevent the transmission of diseases through high-touch surfaces, such as door handles, elevator buttons, gas pump handles, bathroom fixtures, etc. A person could potentially get infected with harmful pathogens if they touch a contaminated surface and then later touch their mouth, nose or eyes. In a recent study from the New England Journal of Medicine (2020), it was found that the COVID-19 virus was able to live up to three days on plastic and stainless-steel surfaces, which are usually the material of choice for design of common high-touch surfaces in modern society.”

Lee’s experience and lively curiosity enabled him to successfully apply a wide range of skills in materials and alloys as a structural materials engineer into methods to help reduce bacterial and viral transmission.

“I have a keen interest for studying unique material properties that can be exploited for different applications beyond the structural-strength purpose for NASA space vehicles,” the alumnus says. “For example, I want to share a little bit of what I learned about the anti-microbial properties of copper, which has been exploited by human civilizations for centuries. The ancient Egyptians used copper to sterilize chest wounds and drinking water between 2600 and 2200 B.C. The Aztecs gargled with a mixture containing copper to treat sore throats. In the 19 th century, a new awareness of copper’s antimicrobial was spawned by the observation that workers in copper factories appeared to be immune to a cholera pandemic that occurred in Europe around 1832, and subsequent outbreaks in Paris, France. Recently, copper has been proven scientifically to kill a host of pathogens, including the influenza Type-A virus.”

Some of these inventions have a dual use for commercialization and for NASA’s in-space sterilization to minimize the risk of exposure of the flight crew to harmful pathogens.

“Previous NASA research has given some indication that bacteria and viruses may be more virulent in space, and crew immune systems may be weakened, in response to the human bodies being exposed to the long-term microgravity environment and cosmic radiation from deep space, which could potentially make the crew more susceptible to infections,” Lee notes. “All of my ideas have to do with the usage of novel anti-microbial sterilization techniques and advanced materials, which can be implemented on the International Space Station (ISS). Some of these ideas could be applied to discarded materials such as cutlery, utensils and even medical devices, with the view to re-purpose or recycle what previously was disposed as waste from the ISS.”

Some of Lee’s ideas are already in the process to be commercialized and business plans are in the making.

“I was asked to support a collaborative effort with The University of Alabama. In this collaboration, a group of college MBA students was presented with the opportunity to gain real-world work experience by exploring the commercial potential from my inventions. Essentially, NASA is providing an opportunity for college students to be young entrepreneurs with the benefits of using NASA innovative technologies for commercial applications. I’ve learned recently that UAH also has a STEM collaborative program with NASA.”

Originally from Vietnam, Lee’s family made a fortuitous connection to Huntsville that led to their being settled in north Alabama after the war.

“In the spring of 1975, my family was airlifted from Saigon, the capital of South Vietnam, to America, and there we spent our first four months at two refugee’s camps,” he recalls. “The first one was at Camp Pendleton Marine Base in southern California and the second at Eglin Air Force Base near Fort Walton Beach, Florida. Through the Vietnam Humanitarian Assistance & Evacuation Act of 1975, our family was sponsored by an American family that happened to be in Huntsville. So, we finally departed our refugee camp in Florida and were excited to make Huntsville our new home. Our settlement effort was sponsored by the Grace Lutheran Church in Huntsville.”

The government program proved to be a godsend for the Lee family as they strove to make their way in a new world.

“I have been told that on April 30, 1975, when Saigon fell, there were dramatic and painful scenes of South Vietnamese trying to flee with the last U.S. personnel,” Lee says. “That month, President Gerald Ford set up a taskforce to resettle up to 120,000 refugees over the coming months. He was committed to making sure that we just didn’t abandon the Vietnamese, who were innocent victims, and many had been allies of the U.S. Unlike most of the foreign-born from Asia, those from Vietnam came to the United States mainly as refugees and political asylum seekers. President Ford also gathered a coalition of church groups, humanitarian organizations, etc., to secure housing and jobs for the resettlement. When my family left the refugee camp in the summer of 1975, it was a well-organized effort done by many good people.”

Getting used to a new country as an asylum refugee brought certain challenges, but Lee reports that he was able to adapt quickly to his new home.

“Research has shown that the younger you are, the easier it would be to adapt to new things or even to a new way of life,” he says. “I was only sixteen years old and was being “Americanized’ rather quickly while attending Huntsville High School. Like most American teenagers, I loved eating fast foods, listening to rock and roll music, and playing basketball after school. I also was befriended by several American students, who were kind enough to help me along the way with my English and getting used to new things. Many of them also went to UAH with me after we graduated from high school. Even after 46 years since I first came to Huntsville, I still see some of them on a regular basis. It has been said that there are friends, there is family, and then there are friends that become family.”

As for academics, UAH soon became a natural choice for a budding engineer pursuing a degree.

“UAH was ranked quite high among the nation’s top 10 engineering schools, as I recall from the U.S. News & World Report. So, my decision to choose UAH for an engineering degree was obvious.”

The NASA inventor turns once more introspective when pondering the new path his life has taken since the onset of the pandemic and the loss of his father.

“At first, I didn’t really know how I should feel,” he muses. “I just plunged myself into this whole inventive work only to use it as a mental therapy to cope with the sudden loss of my father due to COVID 19. Along the way, I realize that my strong desire to do something to help fighting this global pandemic has promoted in me a deeper sense of gratitude of what is already a great blessing for me, to live in America and to have an opportunity of giving back and contributing to the society. There is a saying that goes something like this: ‘It is more blessed to give than to receive.’ Well, I must agree that there is a lot of truth to this wisdom, because I do feel very blessed, indeed.”