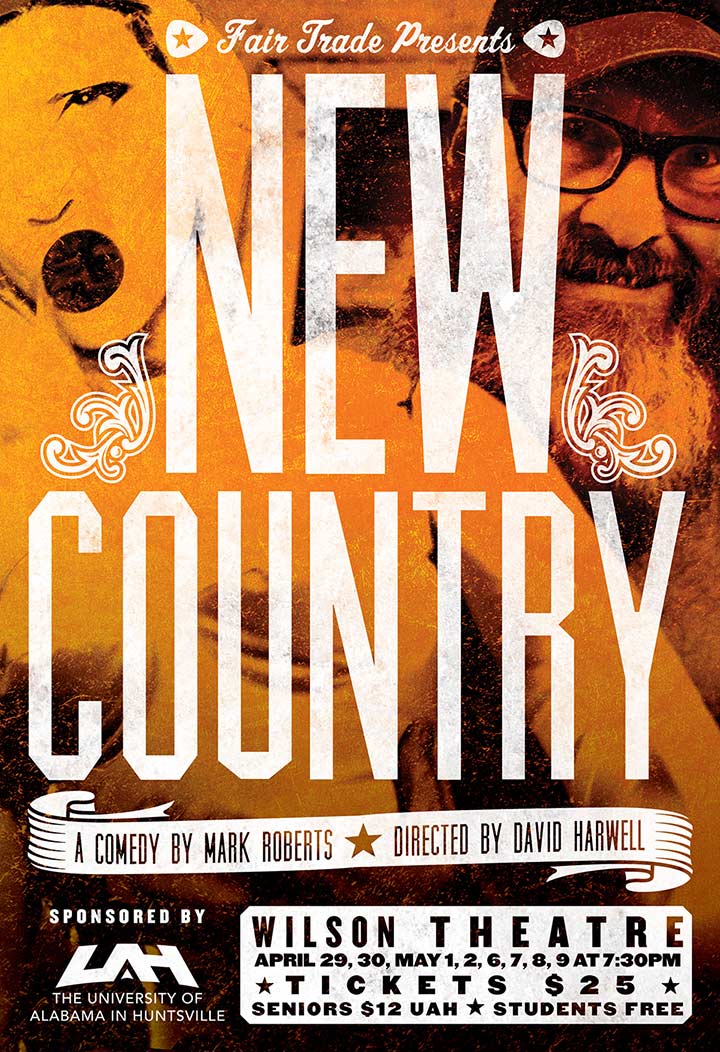 The unfiltered comedy "New Country" will make its debut at The University of Alabama in Huntsville (UAH) before its official off-Broadway opening at the Cherry Lane Theatre in New York. Performances will take place at 7:30 p.m. in Wilson Theatre from Wednesday, April 29, to Saturday, May 2, and Wednesday, May 6, to Saturday, May 9.

The play tells the story of country music sensation Justin Spears, who is finally settling down and tying the knot. With the big day looming, his managers throw him a bachelor party that soon turns from good-natured fun to anger, resentment, and worse.

Written by Mark Roberts, the creator of TV's "Mike & Molly," and directed by David Harwell, associate professor and director of UAH Theatre, "New Country" marks the first time a professional company of theater makers from New York will be developing new work on the UAH campus.

"This is a rare opportunity for UAH to host an amazing group of equity actors and managers producing this amazing new play bound for New York," says Harwell. "It's a dream come true for any theater program to have access to a cutting-edge professional theater on its own campus."

Roberts, who visited the UAH campus last year to host an industry workshop, will also be part of the acting ensemble. A playwright, comedian, and actor, he has been seen on "Seinfeld," "Friends," and "The Practice," among other primetime shows. He also served as the head writer and executive producer of "Two and a Half Men" for seven years and as the creator-showrunner of "Mike & Molly" for three seasons.

This is a rare opportunity for UAH to host an amazing group of equity actors and managers producing this amazing new play bound for New York.

"We are truly fortunate to have this generous theater artist on campus, in our classrooms, and on our stage," says Harwell, who also directed Roberts' plays "Couples Counseling Killed Katie" and "Where the Great Ones Run" at UAH. "Plus, we get to take the production to NYC and premiere it off-Broadway with our students in tow. The experience for them is life changing."

Tickets for "New Country" are available in advance by calling 256.824.6871. General admission tickets are $25, senior tickets are $12, and student tickets are free with Charger ID.