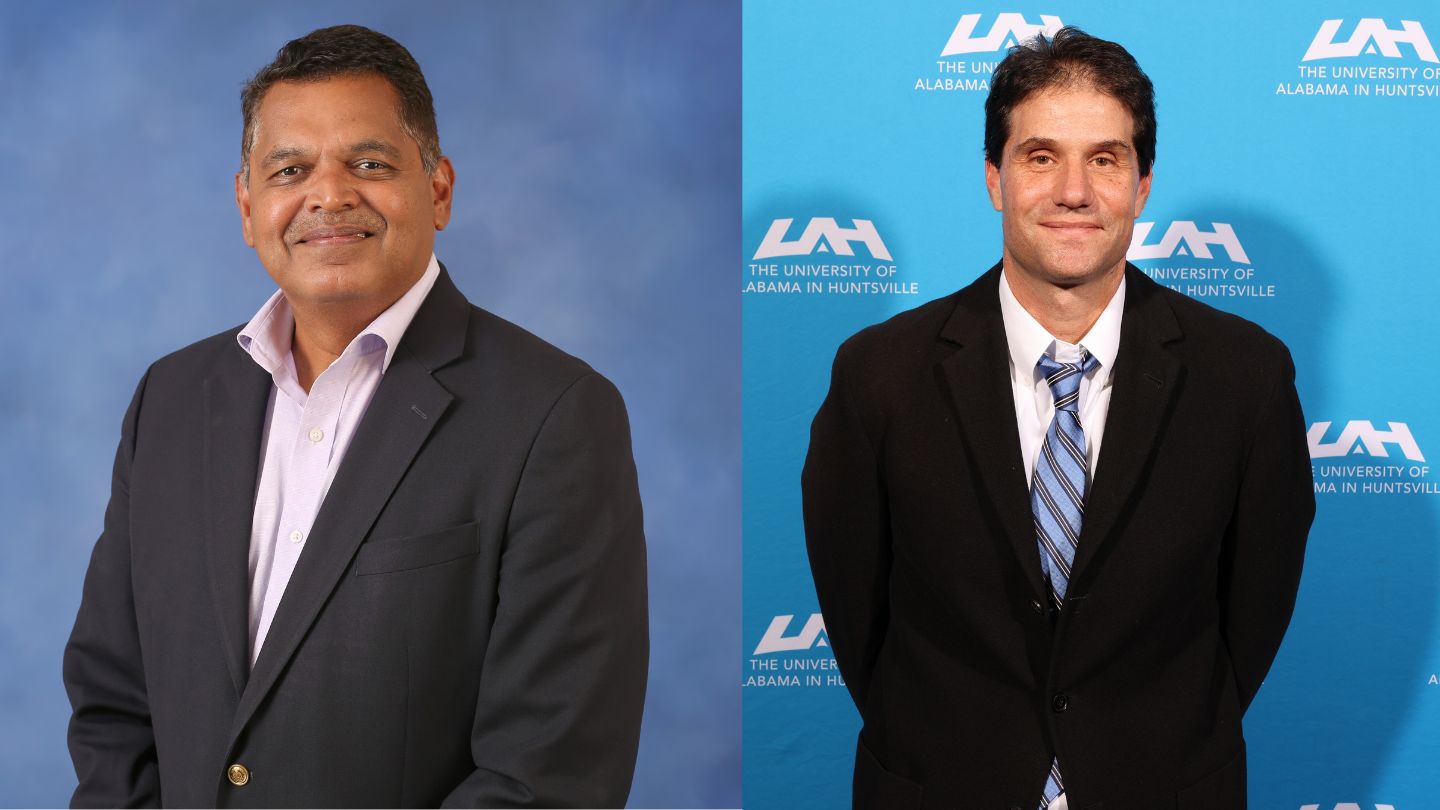 Dr. Sundar A. Christopher, Professor of Atmospheric and Earth Science in the College of Science, has been selected for the King-McDonald Eminent Scholars Chair in Atmospheric and Earth Science, while Dr. Jeffrey Neuschatz, a Distinguished Professor of Psychology in the College of Arts, Humanities and Social Sciences, has been chosen for the King-McDonald Eminent Scholars Professorship in Psychology.

“Congratulations to Professors Christopher and Neuschatz for their Eminent Scholars appointments,” says UAH Provost Dave Puleo. “These selections are a testament to the national and international impact of their research. I continue to be impressed by the outstanding faculty at UAH. We are thrilled that the Eminent Scholars Foundation also recognizes this quality and consequently established the endowed positions to help us retain top notch faculty.”

Since 1997, Dr. Christopher has served in various leadership positions at UAH, including Associate Director of the Earth System Science Center, Chairman of the Department of Atmospheric Science, Director of the Institute of Remote Sensing Applications and Dean of the College of Science. He is an alumnus as well, holding a master’s degree in industrial/organizational psychology from UAH.

“I am honored to be appointed as King-McDonald Eminent Scholars Chair," says Dr. Christopher. “It has been a privilege to serve the students and work alongside world-renowned faculty in the Department of Atmospheric and Earth Science.”

Dr. Christopher’s research interests include satellite remote sensing of clouds and aerosols and their impact on air quality, environment, health and global and regional climate. He works with numerous satellite data sets from polar orbiting and geostationary satellites, ground-based instruments and aircraft data to study the earth-atmosphere system. His book Navigating Graduate School and Beyond is widely used to train graduate students, and his publication Navigating Tenure and Beyond is used to mentor early career faculty.

“Through his impactful research and leadership, Dr. Sundar Christopher has played a significant role in shaping UAH's College of Science, especially our Department of Atmospheric & Earth Science,” says UAH Dean of the College of Science, Dr. Rainer Steinwandt. “He is committed to excellence and enables our students to participate in world-class research. Having a researcher of his stature on our team is a privilege.”

Dr. Christopher has authored or co-authored more than 125 papers in national and international journals, and he has been invited to speak at major scientific conferences across the globe. He has also won numerous grants and contracts from NASA, the National Oceanic and Atmospheric Administration (NOAA) and other federal agencies for studying earth-atmosphere processes. The UAH alumnus has won several prestigious awards as well, including the University Award for Research and Creative Achievement in 2006 and the NASA New Investigator Award.

Interactions like these have helped place UAH in a unique position to meet the STEM needs of North Alabama and beyond. Six university research programs are ranked in the top 25 nationally for federal funding (National Science Foundation), and UAH recently achieved R1 Carnegie status, the highest research activity rating in the Carnegie Classification for institutes of higher learning, while generating a record $149.8 million in research and development expenditures in fiscal year 2021 alone.

Dr. Jeffrey Neuschatz is an internationally known researcher and scholar in the fields of psychology and law. He is a cognitive psychologist who uses laboratory methods to study human perception and memory. Cognitive psychology is classified as a STEM (science, technology, engineering and mathematics) field by the National Science Foundation. Dr. Neuschatz’s work fits well with UAH’s and Huntsville’s important role in supporting national security and law enforcement through the potential future relationships between UAH and the FBI.

“I am extremely honored to be named the King-McDonald Eminent Scholar,” Dr. Neuschatz says. “No person could achieve such a goal without the help of others, and I have been fortunate during my tenure at UAH to have extraordinary students and colleagues, as well as unwavering support from the administration.”

“The King-McDonald Eminent Scholars Professorship is the first endowed professorship in the College of Arts, Humanities and Social Sciences (CAHS),” says CAHS Dean Dr. Sean Lane. “This is an important milestone, and Dr. Jeffrey Neuschatz, Distinguished Professor of Psychology, is an outstanding faculty member whose research in law and psychology has had a far-ranging impact on his academic field and the justice system. The College appreciates the opportunity to recognize faculty excellence, and to provide Dr. Neuschatz with the resources to expand his outstanding work.”

Dr. Neuschatz has co-authored three books: Jailhouse Informants: Psychological Perspectives, Hugo Münsterberg’s Psychology and Law: A Historical and Contemporary Assessment and Psychology of Eyewitness Memory. He has published over 75 highly-cited journal articles and book chapters on topics such as eyewitness identification techniques, jailhouse informants and false memories. His research has been funded by the National Science Foundation.

The impact of Dr. Neuschatz’s research goes far beyond the laboratory. His work has helped influence the use of eyewitness identification techniques. He has provided expert testimony about issues surrounding the reliability of eyewitness memory, false confessions and jailhouse informants in U.S. criminal and military courts. His work has also been highlighted in the media, including appearances on the television series Reasonable Doubt and Final Appeal.

Dr. Neuschatz’s expertise in these fields demonstrates the scope of the UAH CAHS, with a capability to impact relationships with local security and law enforcement organizations, such as the FBI, which is building a $2 billion state-of-the art campus at Redstone Arsenal, the largest single investment in FBI history, that will eventually support over 5,000 employees.

The work of both Eminent Scholars highlights UAH’s commitment to impacting the Huntsville community and the surrounding region in positive ways, by supporting advancements in climate science and environmental protection, as well as through cognitive research that aids national security and law enforcement.