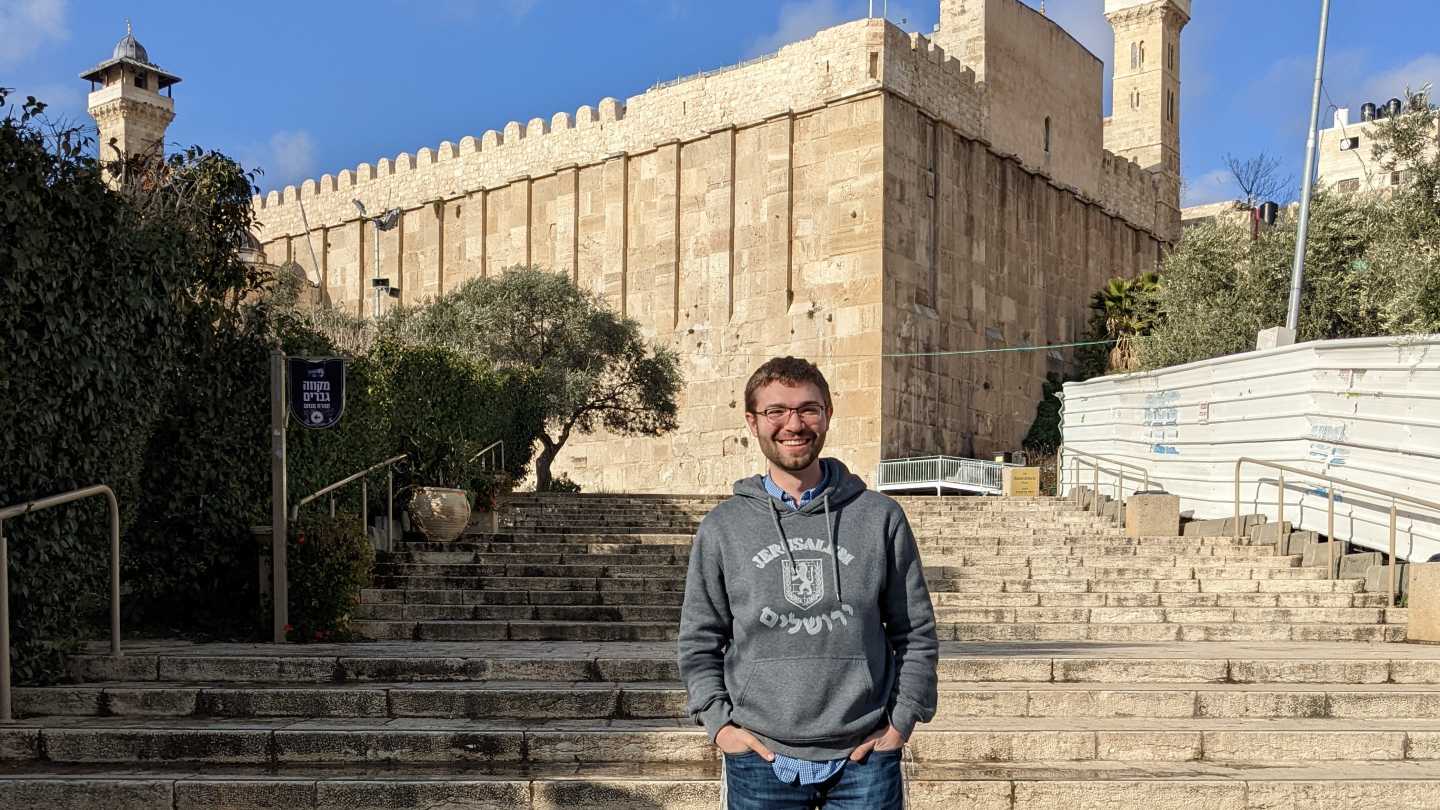 Russell Pope at the Cave of the Patriarch in Hebron, Palestine

Vella Dailey (B.A. History ‘76) credits The University of Alabama in Huntsville (UAH), a part of the University of Alabama System, as playing a significant role in her family’s success. Vella and her husband, Everett, attended UAH, as did her daughter and grandson. Vella also worked at UAH in the Human Resources Department. “With all of our connections and all that we had gotten from UAH and how it enriched our lives,” Vella shares, “we felt like a part of UAH.” That connection, including her grandson’s positive experience with the Department of History at UAH, prompted Vella to endow two scholarships at UAH, most recently the Dailey and Pope Family History Scholarship with a $25,000 gift to support undergraduate students pursuing a degree in history.

As the third generation of his family to attend, Russell Pope (B.A. History ‘21) is keenly aware of the role the University has played in his and his family’s lives and education. Russell grew up with UAH as a fixture in his life. “As a kid, I came to UAH’s campus with my mom to visit my grandmother at work. I’d feed the ducks and walk around the pond. It was a nice place to be.”

By the time he was in high school, Russell started considering attending UAH just as his mother and grandparents had before him. “I applied to several other schools in addition to UAH, but I received a scholarship to UAH, so that made my decision.” Russell isn’t the only student to choose UAH based on scholarship support; scholarships are important recruiting tools to draw talented students to UAH.

The impact of such scholarships is a big part of why Vella gave to UAH. In 2018, she established the Everett and Vella Dailey Scholarship for Immunology Research to support graduate students pursuing a master’s or doctorate degree in the biological sciences. And as Vella explains, “After Russell had such a good experience here at UAH, it prompted us to create an endowed scholarship in history.”

Knowing the importance of scholarships on his own educational path makes it all the more meaningful that Russell’s family has given generously to support research and establish scholarships for future students at UAH. “The cost to enter college is like a toll booth,” Russell explains. “The road is there, but you may not have the money to go down that road. There may be another road, but it’s not the fastest way to get to your destination. My scholarship gave me the means to pay the toll.”

Russell adds, “My grandmother and grandfather were always giving to other people. That’s just how they are - building other people up. I can only hope to be half the person they are.” 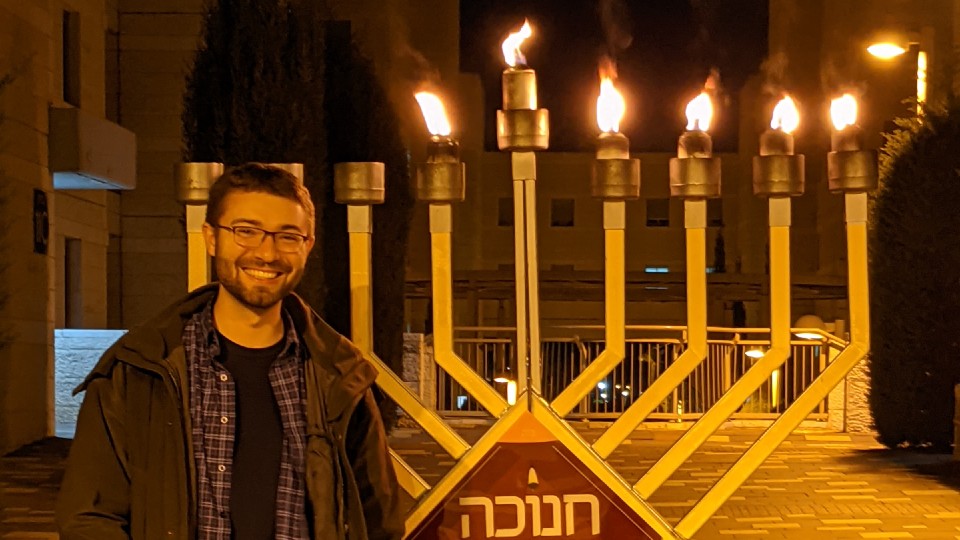 The story of Russell’s family connection to UAH began in 1958. Everett Dailey, Russell’s grandfather, left the army after working at the 7th Army headquarters in Germany and wanted to learn more about an emerging technology: computers. Using his GI Bill, Everett attended what was then the University of Alabama Huntsville Center at Stone Middle School; UAH didn’t officially exist yet. Everett eventually transferred credits to the University of Montevallo and graduated in 1975. Vella also attended UAH and graduated with a degree in history and education in 1976. “It [UAH] was a rich place to be, and it was life changing,” Vella shares.

After graduation, Vella found a home in UAH’s Human Resources department, where she worked for 26 years. “My 26 years here were fortuitous. I found my place here,” Vella says.

Vella and Everett’s daughter, Amy Dailey Pope, also attended UAH, and she graduated in 1985 with a BS/BA in Administration Management and Marketing and in 1990 with a Master’s in Management. “She had attentive and caring professors at UAH,” Vella notes.

This brings the story back to Russell, now pursuing a master’s in the Bible and the ancient near east at Hebrew University’s Rothberg International School in Jerusalem, Israel. Russell graduated from UAH in 2021 with a major in history, a minor in ancient and medieval studies, and a certificate in global engagement with a focus on Arabic and German. As an undergraduate, Russell considered optometry as a career, but because of his love of history and ancient eastern topics, he changed his major. In 2017, he participated in a study abroad program with The University of Haifa, located on Mount Carmel in Haifa, Israel, where he visited historical sites and joined in an archaeological dig. That experience inspired him to return to Israel after graduation to continue his education. “I just really love being here in the place where the Bible was happening,” Russell explains. “You can visit the sites you’re reading about and get a sense of the culture behind it. It’s the Bible in color.”

Currently, Russell is taking classes in Biblical Studies, Classical Prophecy in the Hebrew Bible and various languages, including Biblical Hebrew and Akkadian, but he’s also interested in learning Greek, Sumerian and Aramaic. “Learning these languages helps you understand how different cultures interpreted and translated texts during their time,” he clarifies. Because of his interest in archaeology, Russell says he might stay an extra year to earn a dual degree in archaeology and the ancient near east.

Of living in Jerusalem, Russell says he’s not the only U.S. citizen, and he’s even met a few people from the south, but he’s enjoying meeting people from all over the world. “When I attended UAH, I lived with my grandmother,” Russell says. “Here, it’s so different from Alabama. I have to push myself into new and interesting things. In the dorms I live with people from all over the U.S. and Europe.” He also appreciates the tight-knit community. “In the Jewish community, there’s a spirit of unity that’s sometimes lacking elsewhere. Here, you’re living in that community every day. I feel like that fills a space, a basic human need.”

Russell plans to stay in Israel to pursue his Ph.D. after obtaining his master’s, although he’s not sure exactly what he’ll study. “I like studying about the temple in Jerusalem and thinking about what Judaism looked like in the past versus today. It probably will be something related to the temple.” After that, he says he hopes to live in Israel permanently.

None of these plans, Russell stresses, would have been possible without the financial and faculty support he received from UAH. “I felt like the faculty were there for me and were approachable,” he says. “When I didn’t believe in myself, my professors did.” This sentiment is echoed by Russell’s grandmother: “His professors allowed him to explore his interests and they went the extra mile to encourage him,” Vella enthuses. “They were there for him and all of the students. Even when classes were on Zoom, his professors made him feel connected when everything was disconnected. He couldn’t have gotten better.”

This hands-on, personalized educational experience, which Vella says was a key component of all three generations’ education, is one of the reasons Vella says she wants to support students at UAH.

There’s another personal reason for creating the scholarships. Vella shares, “Everett had Primary Progressive Aphasia, which involves the immune system. When he died, we made a gift to support research in immunology, and we created an endowed scholarship in the biology department to help students study immunology.”

While Vella recognizes the impact her family’s gifts make at UAH, she demurs at receiving accolades: “There’s so much these scholarships can do. It behooves us to support what we think is worthwhile.”

Russell agrees, adding, “Students who receive scholarships see that their dreams are attainable. It’s meaningful that someone wants you to achieve those dreams. A scholarship shows a person’s appreciation for what’s been given to them by giving to others, and it builds up the community.” That conviction to give back, Russell emphasizes, is what his grandparents are all about and is why they have chosen to support UAH.