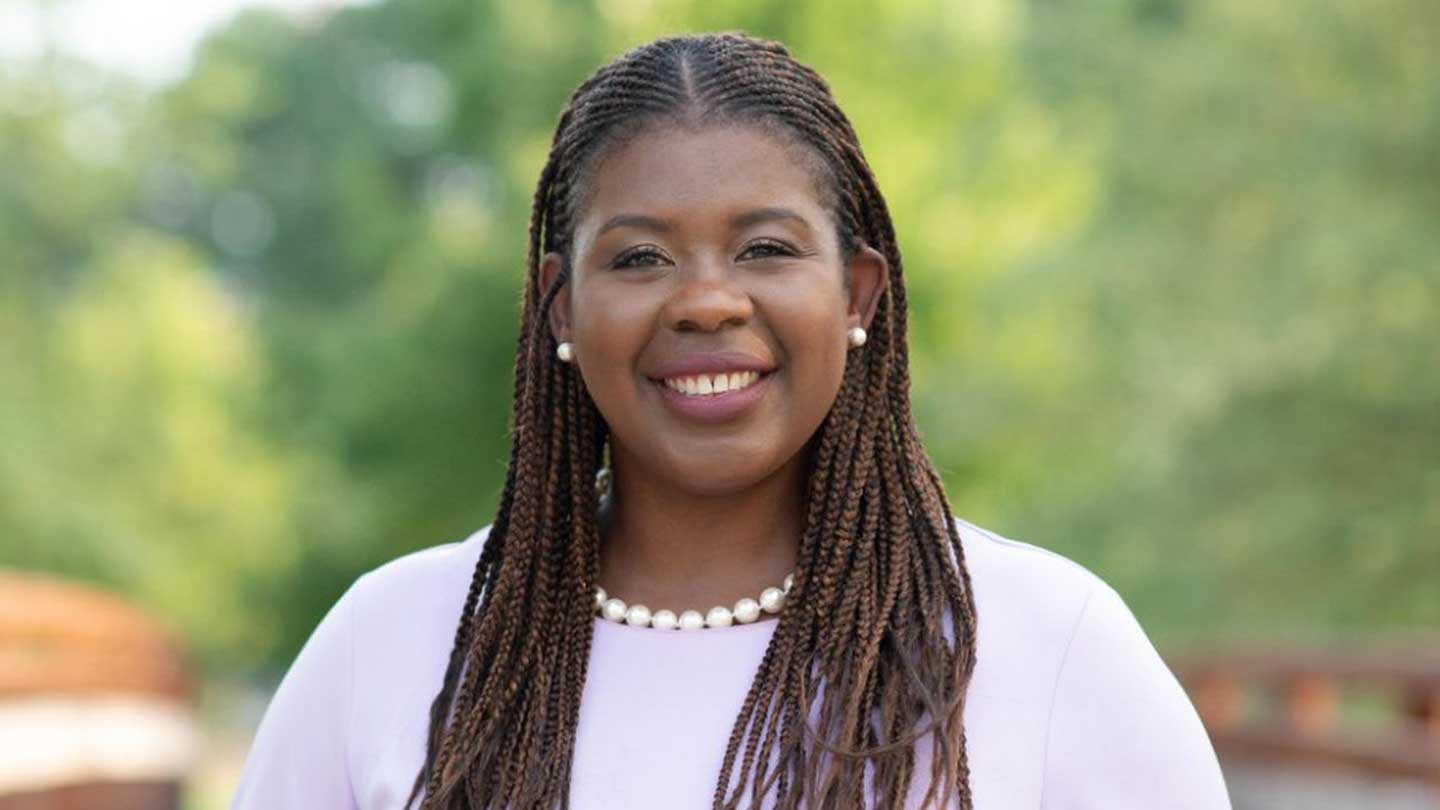 Edwards took office officially on November 11 following the general election. "I took a couple of days to just soak it in," she says when asked how she celebrated her win. "I'm always forward thinking. I want what's next! But with so many people playing such a great part in this historical victory, I had to slow myself down and say, it's not about me, it's about everyone who helped, the volunteers, the people in my community, the little old lady who donated 10 dollars, letting them take the time to celebrate. But I've been doing this job for a month now, and I've been happy to get down to work."

And it seems the kind of work that suits Edwards best has always involved serving others in one capacity or another. The 44-year-old alumna is president of the North Alabama Coalition for the Homeless and a former executive director of Christmas Charities Year Round. Helping others is a passion that clearly runs in her genes.

"It's a life!" Edwards says. "My mother always volunteered and had us doing something, and I've really never known a time where I wasn't somewhere in a volunteer role. Service has always been a big part of my life, whether with agencies that empower women, work with children or helping the homeless. I'm always anxious to stay involved."

Working to make her community better proved to be a natural fit for a person with Edward's energy and drive, while also helping to build recognition in her district. "I love my neighborhood, love my neighbors, she says. "It's definitely home now. In my time of nonprofit and volunteering I'd always volunteered in my district and my neighborhood. Helping out at Christmas time, helping out at the soup kitchen, I already had a really good grasp on the neighborhood and the people around me, and that served me well."

Running a campaign during a pandemic proved to be a challenge. "We had to be creative and innovative," Edwards notes. She and her volunteers looked to find new ways to spread the word while helping her district at the same time. "I asked myself, what does the community need? How can we put that into the community's hands and get both those things done at the same time? So I spent campaign money buying masks with our logo, and they were really, really needed in that April and May timeframe, and that became part of my brand."

For someone whom public service runs so deeply, did Edwards ever dream of getting into politics someday as a young girl?

"It never crossed my mind!" the new commissioner says with a smile. "I never thought I would be sitting here. But I did study it. As a reporter I covered so many campaigns, and I would say, 'I would never do this,' or 'they should never do that.' But as far as me being in that role, no I never, ever thought that!"

Instead, the alumna obtained a degree in communications from The University of Alabama and later added an MBA from UAH. She moved to Huntsville in 2002 to work as a television journalist, and her experience also includes stints in media jobs in Arkansas, Memphis, Birmingham, and Tuscaloosa.

"I did some form of media for 13 years," Edwards says. "I thought I always wanted to be an anchor on television. I used to practice in the mirror using a hairbrush!" But ultimately, as her campaign biography explains, she found "she did not want to tell the story, as much as she wanted to join the conversation and bring about change."

From there it simply made sense to combine her extensive communications and business experience with her volunteerism to map out a vocation in public service that has carried her to the position she holds today.

"Some things are for a season," Edwards says, reflecting on the journey that has brought her to this moment. "It was a huge decision for me to drop the media to go into non-profit management. Then I ran Christmas Charities full-time for five years, and it really blossomed, but I left that as well, and it had my family scratching their heads! But it was important to focus on my family and home at that time. Getting back into the working world was a gradual build up after that, working as a student specialist part time at UAH, then marketing for the College of Business, and as an adjunct lecturer of business communications for the College of Arts, Humanities and Social Sciences. It comes from not being scared of following your passion, following where it leads you."

That passion soon directed Edwards into advocacy for the homeless population in Madison, Morgan and Limestone counties as president of the North Alabama Coalition for the Homeless.

"I kind of fell into taking my mother's lead, who was working in the kitchens at the time with the homeless in Florida," she says. "I started out in a volunteer capacity, and then the opportunity to become a board member came along, and it just grew. And now I've been president for another year. In my district I have four shelters for the homeless, and we also have camps. This is where I knew I was needed. And now I'm in a position to bring about change in a different way."

The newest commissioner carries that same spirit and drive to her new job each day.

"I'm training and learning; there has been no time to sit back and relax," Edwards says. "Going right into the holiday season, we are doing holiday boxes for constituents. Today I went to a middle school and delivered holiday bags to a special needs class. I'm meeting someone new and hearing ideas every day. Now's the time to see what's working, what's not. There are a lot of visionaries in the district. I have a Wellness Center for seniors, and it's closed right now, so we have been really busy with that. When it reopens we want to open with a bang! We also have a community garden, 50 acres, and volunteers are coming out to help with that."

Often when people think of the role of their County Commissioner, they might picture someone primarily concerned with bulldozers and paving roads, but Edwards reports that her job responsibilities go a lot further than that.

"We all have completely different needs [each district]," she says. "We have our road equipment and people here in District 6, but we only have 14 miles to maintain. My needs here are totally different from some of the other commissioners. But I still have to make decisions on things like culverts. Last week I got to oversee the cleaning of a culvert and the laying of some pipes. Some days I have to wear a dress, other days, outdoor clothes!" she says, laughing. "But we always have to focus on the people."

It's that focus that lets Edwards know she has arrived at the place where she is needed most. "People have questions about things like becoming a county vendor or how to go about submitting bids. A lot are interested in grant money. And I admire them. Everything I've ever done in life has prepared me for this. Things like working with the SBA and investors and microloans, just the whole process of it, going for a commercial loan and being turned down. I have empathy for them because I've been there."

So what does it feel like to suddenly have 58,000 constituents depending on you?

"It's exciting!" Edwards says. "I don't really feel the weight of it most days. I know that there are definitely people behind me, doing everything to help me succeed. I break it down to the phone calls. All of these people are not going to call me, but Ms. Robinson is going to call! Let's make Ms. Robinson happy!"

Edwards laughs with joy at the thought of helping others. "I realized on my first day here that every job I've ever had over the past 25 years has been preparing me for this. The work with media, marketing, in the classroom at UAH. I'm pulling from every job I've ever had. This is where I'm supposed to land."

And what does she have to say about being a role model for others who would like to follow in her footsteps?

"I think about my days in the classroom at UAH, when I would see my students who are 19 and hyperventilating because they don't know what to put down for a major," she recollects. "You don't have to have your whole life figured out today! Take it one step at a time and have no doubts and no fear. And then if change comes, embrace it. Don't be afraid to change. I've changed careers about four times. I did not have it all figured out at the age of 19. My dad had the same job for 35 years! So he did not understand whenever I would drop what I was doing and go into something new. I had a lot of theater classes. I have stepped out on stage multiple times, and I have not regretted it one bit. I have a family member that says I don't have enough sense to be afraid."

Does she ever pause to take a peek into her own future?

"Five years ago, this is not where I saw myself," she says. "But I am not afraid to pivot. Then one day it becomes as clear as the nose on my face, and my family says, 'Oh that's what we're doing now? Okay, grab your coat!'"