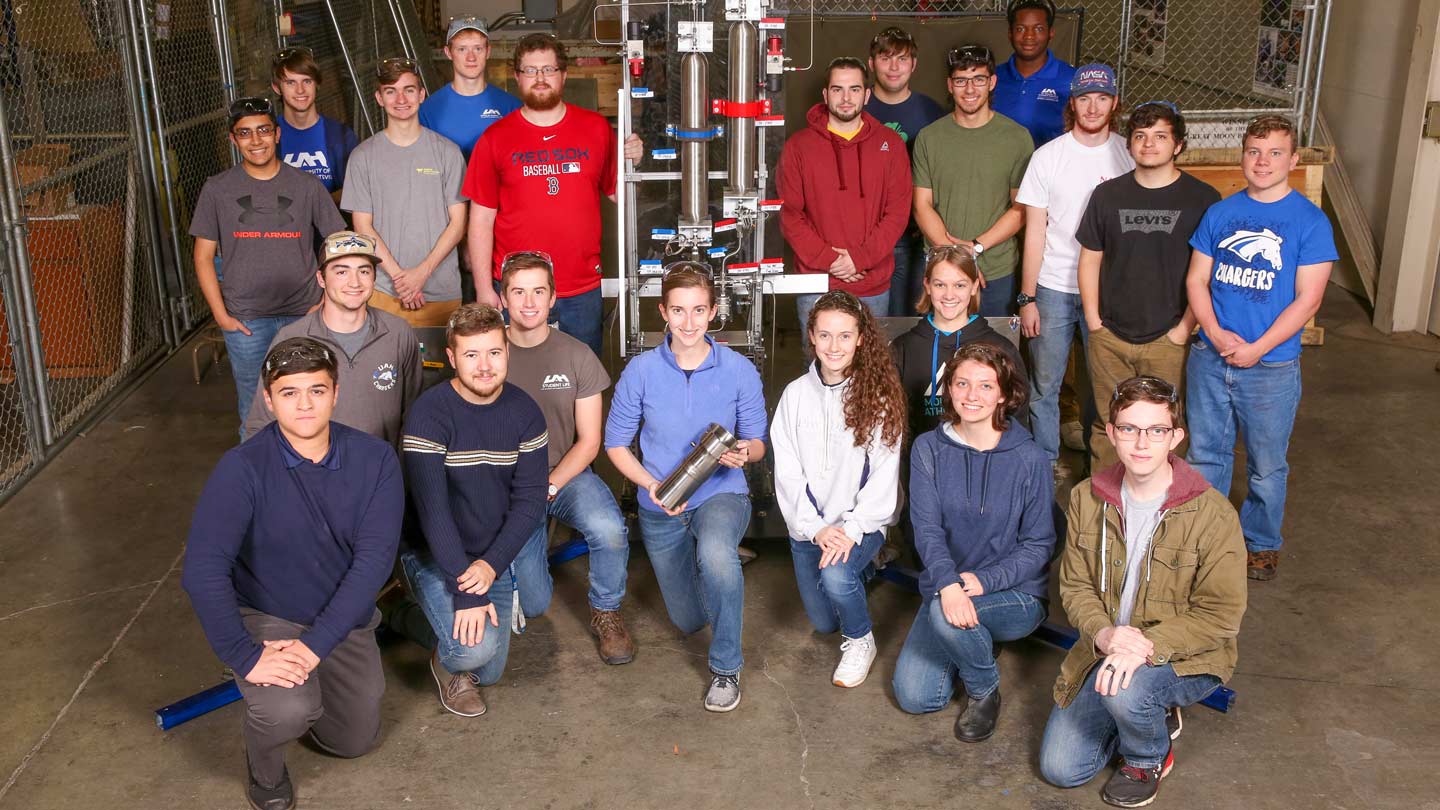 Space Hardware Club team members with parts of the Tartarus rocket in the UAH Engineering Design and Prototyping Facility.

The new year brings new tests for an ambitious liquid propellant rocket being engineered by the Space Hardware Club (SHC) at The University of Alabama in Huntsville (UAH).

"Our ultimate goal is to carry a nine-pound payload to 30,000 feet using a student researched and developed liquid propulsion system," says McKynzie Perry, the project’s manager. The SHC hopes its vehicle will be ready to launch at the 2021 Spaceport America Cup competition for student rocketry teams in southern New Mexico.

The Tartarus project began in 2017. The rocket is fueled by nitrous oxide and ethane, which are propellants with high vapor pressure and similar pressure-temperature curves. That significantly lowers complexity by allowing the team to use a blowdown engine cycle and store both propellants at the same temperature, according to Perry.

"It’s one of the largest projects physically that SHC has produced, and I think it has one of the longest parts lists in recent memory," she says.

"As of our most recent simulations, the rocket will stand 15 feet tall and 6 inches in diameter," Perry says. The launch rail will be 30 feet tall and the ground system footprint is a 30-foot equilateral triangle. For the first engine firing, the team will station itself 500 feet away behind blast shields.

The team is currently focusing on a short duration inaugural test of the engine. 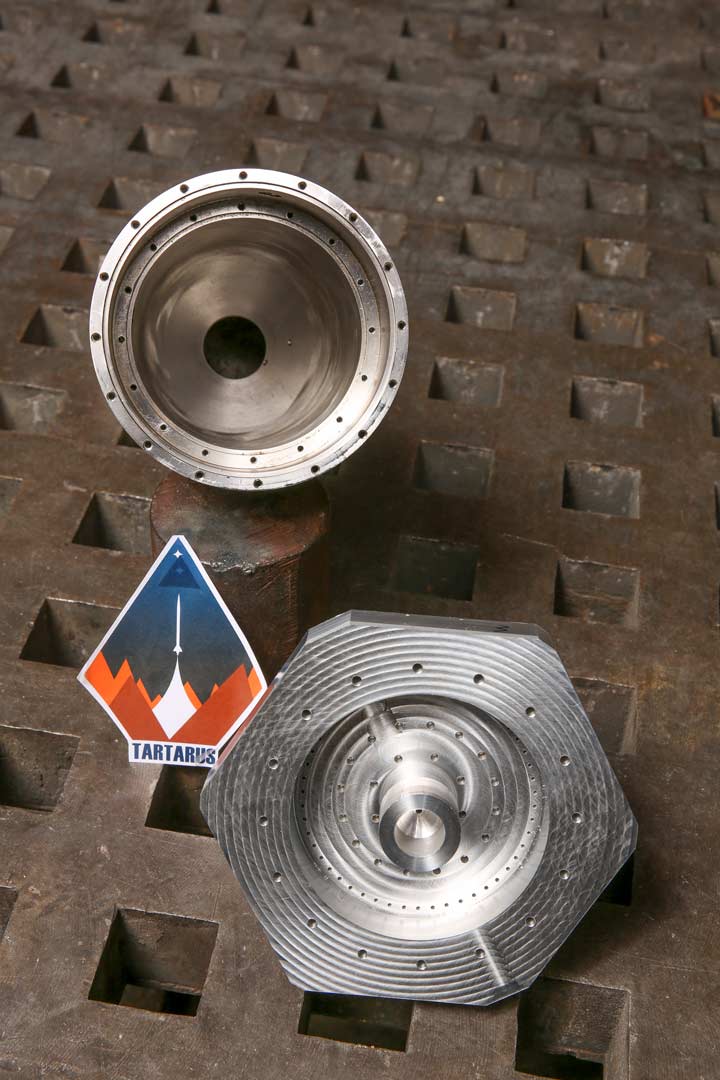 The Tartarus combustion chamber assembly and injector with the mission decal.

The coming test will assess the functionality of the ground system, the viability of SHC’s injector design and the team’s capability to safely perform hazardous operations.

"We are on track to perform this test this semester but have contingencies set into next semester," Perry says. "By the end of the year we would like to perform a full duration firing of the system. Once the propulsion system is better characterized, we can begin the process of integrating with our vehicle design for the competition."

The significant safety concerns accompanying static fire tests are new to the SHC and have improved the organization’s safety practices.

"This past semester has probably been my favorite since the project started," Perry says. "There’s so much momentum built up. We have had a lot of determination and commitment to designing the system safely. Now that the hardware is in front of us and is finally getting integrated, we’re the closest we’ve ever been to firing."

"We entered this academic year with a complete injector cold flow, heat treated propellant tanks and most of our manufacturing complete," she says.

The challenges of liquid propulsion for the SHC team are matched by the challenges of developing its own test stand and ground system in addition to the final vehicle. The payload mission is still undetermined.

"The rocket propulsion system and ground system have plenty of instrumentation onboard to measure the conditions of the propellant and flight properties as the vehicle flies," Perry says. "Currently for the static fire configuration, we have 22 instruments on the system."

NOE-1W, the inaugural test campaign, will be conducted off campus to ensure the required safety radius.

"Our goals for the test are to deliver propellant from the ground system to the vehicle to the engine, ignite the engine, and shut down the engine," Perry says. "While we will gather some preliminary performance data on the engine, this test is mainly a chance for the team to walk before we start running in a full duration test of approximately 20 seconds."

SHC is advised by Dr. Gang Wang and Dr. Richard Tantaris The club is sponsored by UAH, the Alabama Space Grant Consortium and other individual donors who believe in the SHC’s mission.

The team has benefited from the expertise at UAH’s Propulsion Research Center (PRC) in developing various aspects of the system, especially safety.

They have been very kind in donating their advice and time to help the team," Perry says. "Recently, they allowed us use of their spray facility to perform hydrostatic proof pressure testing of our pressure vessel. The future for the team is much brighter with their technical support and we are incredibly thankful for the relationship we’ve been able to build with them."

Additionally, the team relies on many technical mentors from the aerospace industry who have been vital to progression towards static fire. The five-year challenge has paid numerous dividends, Perry says.

"In addition to propulsion education, the project has produced a generation of engineers who handle technical and managerial complications with grace and resilience," she says. "Our hope is that the project can raise and educate the future generations of propulsion engineers, since it can be difficult to gain propulsion experience through coursework alone."

Perry says she’s learned a lot personally through the project.

"This team is where I really cut my teeth in propulsion engineering. Everything takes a little bit longer than you think it will, especially if you’ve never done it before," she says. "I’ve learned to eliminate the phrase ‘if everything goes perfectly, we will get X event done by Y date’ from my vocabulary because things rarely go perfectly in development."

Optimism is good, she says, but it’s really important to leave some room for bumps in the road when scheduling the team’s activities.

"I think unrealistic schedules also can cause more frustration," Perry says. "I’ve also learned how to keep a more level head when frustrated because frustration leads to impulsive actions that aren’t productive to the team."

Gaining these experiences as an undergraduate is a benefit of attending UAH, Perry says. She says very few universities offer undergraduates the opportunity to work with propulsion systems outside of research assistantships.

"Since Space Hardware Club doesn’t require a student to go through an application process," she says, "it is one of the most accessible propulsion research projects for undergraduates."