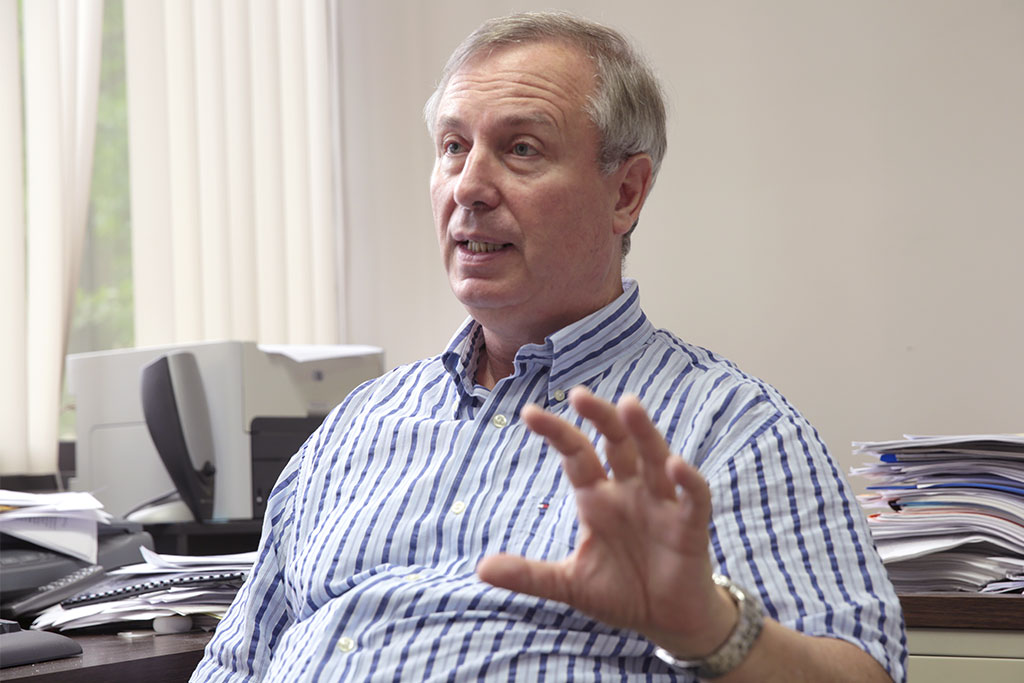 HUNTSVILLE, Ala. (May 30, 2014) – Talk about a mathematics hot rod – how does 13 quadrillion calculations per second grab you?

A scalable computer code developed at The University of Alabama in Huntsville (UAH) that efficiently uses supercomputing power, plus important areas of UAH scientific inquiry, landed scientists at the Department of Space Science and Center for Space Plasma and Aeronomic Research (CSPAR) in the driver's seat for a highly sought chance to run complex equations on a blisteringly fast supercomputer.

The UAH effort using the Cray Blue Waters supercomputer supported by the National Science Foundation (NSF) and the University of Illinois, where it is located, resulted in advances in understanding solar wind and the heliosphere.

In the competitive and code-dense world of supercomputing, think of the UAH scientists as calculations hot rodders, vying with other researchers for computer power to test-drive equations they build to provide them with scientific answers. At the same time, running these complex calculations helps tune up the machine they are using, as ways to make it run more efficiently are discovered.

"We benefit a lot from the supercomputers made by Cray, but in a lot of cases our feedback helps Cray to make a better supercomputer," says Dr. Pogorelov. The key to achieving both results is the code used to run the program.

"If you want to do a very high resolution simulation taking advantage of a supercomputer's parallel capabilities and architecture, you must substantially rewrite your code," says Dr. Pogorelov.

Getting to drive a supercomputer like that depends on acceptance by the NSF's Petascale Computing Resource Allocations (PRAC) program of both the science being explored and efficiency shown in using the supercomputer's resources. Scientists also use the Extreme Science and Engineering Discovery Environment (XSEDE), a single virtual system supported by the NSF they can use to interactively share computing resources, data and expertise. There's limited supercomputing capacity available nationally, so competition is fierce.

The combination of these skills allowed us to be leaders in supercomputing in the country. In the NSF proposal process, one goal was that only the most advanced codes should be used to achieve breakthrough results.

"The combination of these skills allowed us to be leaders in supercomputing in the country," says Dr. Pogorelov. "In the NSF proposal process, one goal was that only the most advanced codes should be used to achieve breakthrough results."

That is no easy task, and the UAH researchers wrote 150,000 lines of a heliospheric modeling code they call Multi-Scale Fluid-Kinetic Simulation Suite (MS-FLUKSS) in C++ and Fortran for their experiments.

(For more information on the code, see "Modeling Solar Wind Flow with the Multi-Scale Fluid-Kinetic Simulation Suite;" Pogorelov, N. V.; Borovikov, S. N.; Bedford, M. C.; Heerikhuisen, J.; Kim, T. K.; Kryukov, I. A.; Zank, G. P., in Numerical Modeling of Space Plasma Flows, San Francisco: Astronomical Society of the Pacific Conf. Ser. 474, 2013, p 165. A more recent paper, "MS-FLUKSS and Its Application to Modeling Flows of Partially Ionized Plasma in the Heliosphere," has been accepted as one of only 10 Lightning Talks to be given at XSEDE14 in Atlanta July 13-18.)

When the UAH scientists added their code to the Chombo framework – a publicly available software for adaptive solution of partial differential equations developed by the team's long-time collaborators at Lawrence Berkeley National Laboratory – the result was 650,000 total lines of code.

"As a result, even doing a simple thing is not straightforward in these codes and requires a specific combination of skills in physics and space and computer science. It so happened that our group was already strong," Dr. Pogorelov says. UAH's code writers had already piloted the Cray Jaguar and Kraken, meanwhile perfecting their parallelization and data handling techniques. "When we submitted the proposal, we were expected to prove our code was scalable."

The Cray Blue Waters supercomputer that was used by UAH scientists to do solar research.

The researchers used the supercomputer to probe two scientific questions, both involving the interaction of the solar wind with the local interstellar medium nearby. The first involves why the Voyager 1 spacecraft surprised scientists by penetrating interstellar space years earlier than models had predicted it would ("Voyager 1 Near the Heliopause;" S. N. Borovikov; N. V. Pogorelov; The Astrophysical Journal Letters, Vol. 783, No. 1, 2014).

The second scientific question regarded the flow of the long "heliotail" contrail left by the sun, which the researchers examined using plasma kinetic particle analysis. "We modeled it, and we found that the heliotail can be very long," says Dr. Pogorelov ("Three-dimensional, numerical simulation of the heliotail using the kinetic model"; a talk by Sergey Borovikov; 2013 Fall AGU Meeting).

"Technically, we are solving the system of magnetohydrodynamic equations coupled with a kinetic Boltzmann equation," Dr. Pogorelov says. The Boltzmann equation is named for Ludwig Eduard Boltzmann, an Austrian physicist and philosopher whose greatest achievement was in the development of statistical mechanics, which explains and predicts how the properties of atoms determine the physical properties of matter. "From a scientific viewpoint, it is very important that we model neutral atoms kinetically with the Boltzmann equation because collisions are very rare between hydrogen atoms and ions."

Such solutions "take a lot of computational power," says Dr. Pogorelov. "It is not only our previous research that made it possible to use this supercomputer, but our current research then leads to new results that create funding to support more projects on new questions."

One area of possible future exploration the UAH team has acquired support to deal with from NASA is a smart, adaptive refinement of the computational grid used to explore the heliosphere. "The idea is that we can perform small-scale simulations of instabilities and magnetic reconnection locally," Dr. Pogorelov says, "while simultaneously doing a good job in the resolution of global features of the solar wind's interaction with the interstellar medium."