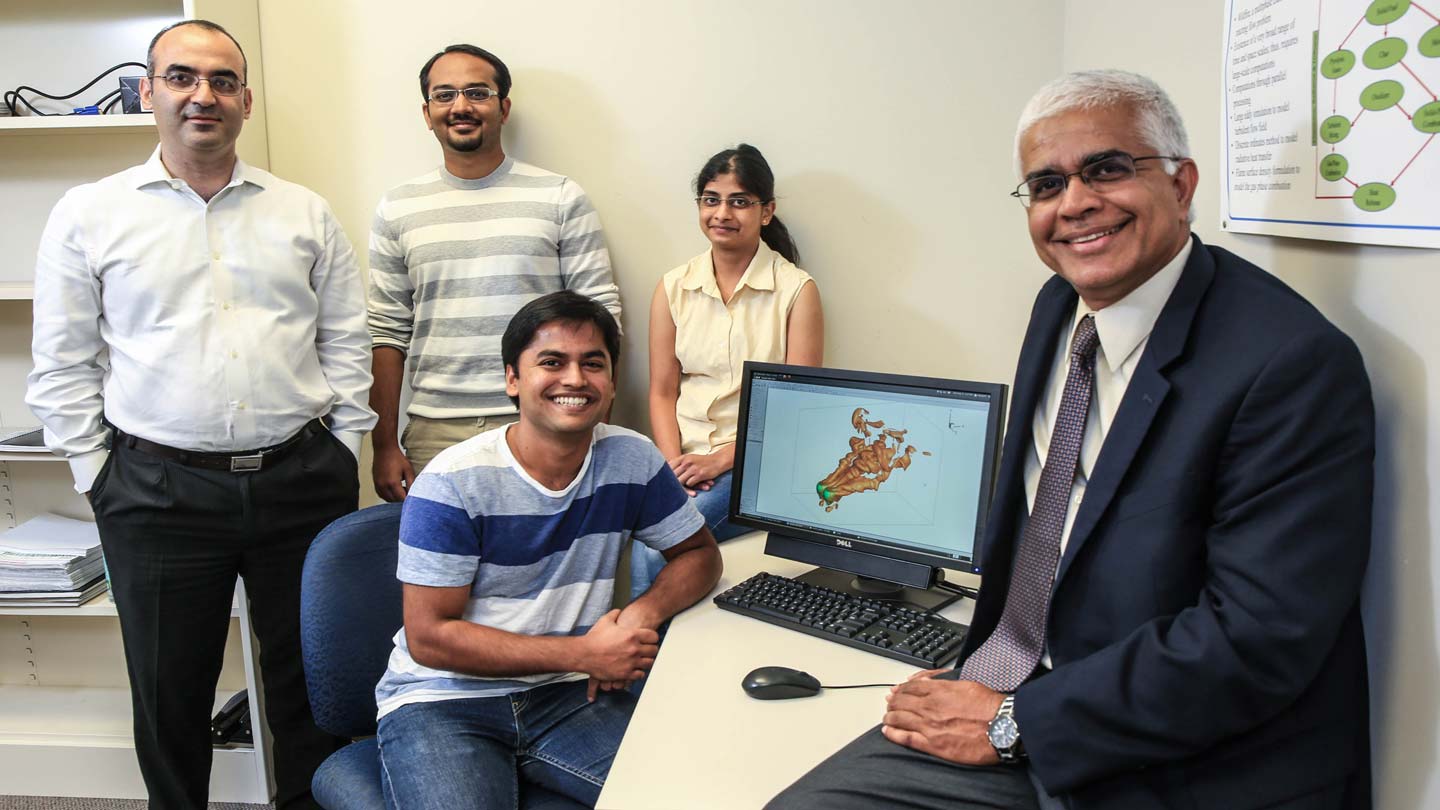 HUNTSVILLE, Ala. (August 19, 2014) - If we can better understand scientifically how wildland fires behave, we'll have a better chance to accurately predict the spatial and temporal evolution of high intensity wildfires, says Dr. Shankar Mahalingam, dean of the UAH College of Engineering, and professor of Mechanical and Aerospace Engineering.

Dr. Mahalingam is studying how wildland fire propagates in an effort to be able to more accurately model such fires via physically based computational models. He says he's confident that the day will come when wildland fires will be forecast using computer models just as accurately as we now can forecast the next day's weather.

"My vision is that, just like you have fairly reasonable weather predictions today for what is going to happen tomorrow that have evolved to be very accurate compared to where they started out in the 1940s and '50s, we can have that with fires," he says. "We look at the weather forecast every day to tell us how to prepare for tomorrow, and that is because we can predict the weather with a large degree of confidence."

When wildland fuel distribution and ignition potential can be very closely assessed, and the regions within a fire where intense energy in the form of heat is released can be accurately determined, the rate and area of a fire's spread can be predicted days in advance. That will open doors to scientific advances in everything from firefighting technologies to firefighting resource logistics and can even influence the design of subdivisions, developments and homes, says Dr. Mahalingam.

High confidence in the reliability of fire prediction is lacking today, even as Western drought and the effects of climate change drive up the total acres burned nationwide and also the average size of each fire, ballooning the number of on-call U.S. Forest Service firefighters and the total costs to battle the flames.

My vision is that, just like you have fairly reasonable weather predictions today for what is going to happen tomorrow that have evolved to be very accurate compared to where they started out in the 1940s and ‘50s, we can have that with fires.

A single battle with a large wildfire can incinerate $1 million a day in firefighting costs, a total that has exploded annual national costs to nearly $2 billion recently, even as states ante up an additional $1.5 billion themselves. Everyone from government agencies to developers to forest managers to firefighters - and even potential evacuees - could benefit from reliable, physically sound fire prediction tools.

Even though U.S. wildfires are seen largely as a Western problem, in 2013 Alabama's 1,284 wildfires - including some large springtime blazes - burned 25,623 acres in the state. That's slightly over 40 square miles of land.

"If a fire began in the forest, where would the perimeter be in two hours, four hours or six hours? That currently is about the range of prediction ability that we have with operational fire behavior models, for low intensity fires," Dr. Mahalingam says.

Today, most fire behavior predictions rely largely on the "pure experience" gained by firefighters and managers who have fought blazes for years, Dr. Mahalingam says. With funding from the U.S. Department of Agriculture's U.S. Forest Service Division, Dr. Mahalingam and his collaborator, UAH Mechanical and Aerospace Engineering faculty member Dr. Babak Shotorban, are currently supervising four doctoral students in the MAE department to do the kind of basic forest fire combustion research that can move our predictive ability from the experiential realm to scientific, mathematical models and longer-range computational predictions.

Wildland fires involve complex interactions that include fuel distribution, terrain topography, chemical reactions, energy transfer and the associated fluid dynamics that transport moisture, gas-phase hydrocarbons, air and products of combustion. In 1998, his previous fundamental work in turbulent combustion at the University of Colorado at Boulder led Dr. Mahalingam to do NSF-sponsored field research in Alaska comparing the properties of prescribed permafrost burns to help develop models describing the chemistry and fluid dynamics of fires. His interest was sparked. Since then, he has worked to bring plant combustion processes into the laboratory where they can be studied, better understood and modeled in smaller, controlled conditions.

"My interest was to figure out, when you see this raging fire, where exactly is all this energy being released in space?" he says. Where the energy release associated with combustion is released, its intensity, and how it is being released are all basics for predictive ability. "Where the energy is released is what is going to dictate the fluid dynamics in the vicinity." In turn, the fluid dynamics of the air and combustible hydrocarbons as fire progresses could point the way to where the fire will spread.

Because the fuel for wildland fires is mostly in the undergrowth, three species of shrub or small tree that are prevalent in southern California have been the focus of Dr. Mahalingam's research: the chamise bush; manzanita, which can grow as a bush or small tree; and scrub oak, a small tree. (A. Dahale; S. Ferguson; B. Shotorban; S. Mahalingam, "Effects of Distribution of Bulk Density and Moisture Content on Shrub Fires," International J. Wildland Fire, 22 (5), pp. 625-641, 2013)

"In a computer model we are using very small volumes of space, on the order of one cubic millimeter on one end to a cubic meter on the other end" he says. "We model these on a grid as a region of space. Fire is a process in which the energy release will drive the airflow around it and the resulting fluid dynamics will in turn drive the fire." Continual warming of the leading edge of the fire is a necessary precondition to releasing the chemicals in the fuels that are needed to sustain it.

Dr. Mahalingam studied that more closely in association with the U.S. Forest Service while at the University of California Riverside. "When they go out and do these prescribed fires, sometimes on day one the fuels don't ignite easily and spread, but they can come back there on day two and it will light and spread," he says. "This situation is termed marginal burning. I began to study why the prescribed fire spreads. Under what conditions does it spread and when does it not spread?"

In a laboratory setting, he along with his graduate students and other collaborators, experimented with ground slope, fuel type, relative humidity, wind, and fuel source moisture content as determinants of marginal burning. Each fuel was modeled through an annual seasonal cycle.

"We found that one of the most sensitive elements that is required for fire to spread is wind and the other is moisture," Dr. Mahalingam says. California's seasonal combination of Santa Anna winds and rising temperatures both serve to dry the fuel for combustion and drive the fire's process once underway.

"I was studying marginal burning behavior, which I call a fire transition phenomena," Dr. Mahalingam says. "Fire is losing heat through radiative and convective heat transfer and it is gaining heat as energy is produced as a result of combustion, so it is an energy balance problem. We also initiated a series of studies to examine the transition between a ground fire and tree crown burning."

That work continued after he came to UAH in 2010 and started collaborating with Dr. Shotorban. Currently under study is the effect of shrubs as undergrowth in wildland fires, and how proximity and wind can influence their combustion characteristics. "We light the shrub, then figure out how much time it takes to burn out," Dr. Mahalingam says. "We calculate how much mass is consumed so that we can then replicate that in our model. We are also interested in the details of the fire, like the vortices created." (Padhi, S.; A. R. Dahale; B. Shotorban; S. Mahalingam, "Numerical investigation of stationary shrub fire in crosswind," Paper 070FR-0073 presented at the 8th U.S. National Combustion Meeting, Salt Lake City, UT, May 19-22, 2013)

The UAH scientists are looking at how the interaction of fires in shrubs near each other can create energy hot spots in a conflagration. Shrubs burned in controlled settings are being compared to computer modeled shrub fires to assess predictive qualities.

"As you bring the shrubs closer together, is the fuel being consumed faster and the energy created faster as a result?" Dr. Mahalingam asks. "We are interested in how the fire spreads from shrub to shrub, what the interaction is, and at what spacing and what the wind's effects are. It turns out that for cases with no wind, you really have to get the shrubs close together for one to affect the other." (Dahale, A.; S. Padhi; B. Shotorban; S. Mahalingam, "Flame merging in two neighboring shrub fires," Paper 070FR-0198 presented at the 8th U.S. National Combustion Meeting, Salt Lake City, UT, May 19-22, 2013)

All of this scientific effort is being driven by Dr. Mahalingam's quest for reliable, scientific computerized fire prediction.

"My hope is that the time period of fire prediction can be extended to several day and nighttime cycles ahead," he says. "You have to include the nighttime cycles separately because they present a very different set of atmospheric circumstances for the fire. I want us to be able to predict fire behavior with a high degree of confidence."

NOTE: Coauthors S. Dover, B. L. Yashwanth, and S. Padhi are currently pursuing their doctoral degrees at UAH, while A. Dahale completed his doctorate in Mechanical Engineering in 2014 under the supervision of Drs. Mahalingam and Shotorban.