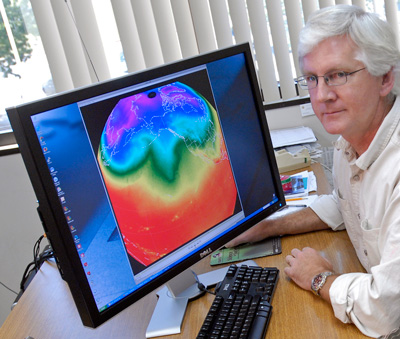 Dr. Roy Spencer’s models show that a natural shift to stronger warm El Niño events might be responsible for a substantial portion of global warming during the past 50 years.
UAH

HUNTSVILLE, Ala. (Nov. 13, 2013) - A natural shift to stronger warm El Niño events in the Pacific Ocean might be responsible for a substantial portion of the global warming recorded during the past 50 years, according to new research at The University of Alabama in Huntsville (UAH).

"Our modeling shows that natural climate cycles explain at least part of the ocean warming we've seen since the 1950s," said Dr. Roy Spencer, a principal research scientist in UAH's Earth System Science Center and the new study's lead author. "But we also found that because the globe has had more frequent La Niña cooling events in the past 10 or 15 years, they are canceling out some of the effects of global warming."

The paper detailing this research, "The Role of ENSO in Global Ocean Temperature Changes During 1955-2011 Simulated with a 1D Climate Model," is scheduled for publication in the Asia-Pacific Journal of Atmospheric Science.

The results also suggest the world will warm by 1.3 C (about 2.34° F) from a doubling of atmospheric CO2, which is only one-half of the warming expected by most climate researchers.

General circulation climate models - such as those used to forecast global climate change - do not reproduce the tendency toward 30 year periods of stronger El Niño or La Niña activity, as are seen in nature.

Spencer and co-author Dr. Danny Braswell used all of the usual climate modeling forcings - including carbon dioxide and other greenhouse gas enrichment - in their study, but also plugged the observed history of El Niño ocean warming and La Niña ocean cooling events into their model to calculate the 61-year change in global ocean temperature averages from the sea surface to a depth of 2,000 meters.

"We used the observed ENSO (El Niño Southern Oscillation) history since the 1950s as a pseudo forcing factor of the model," Spencer said.

When they ran their ocean model without ENSO, they arrived at the same general conclusions as the more complex general circulation climate models. When they added data from past El Niño and La Niña events as only a change in ocean mixing, the model indicated a climate system that is slightly less sensitive to CO2-induced warming than has been believed.

But the biggest change was when the model was allowed to change cloud cover with El Niño and La Niña in the same way as has been observed from satellites. The results suggest that these natural climate cycles change the total amount of energy received from the sun, providing a natural warming and cooling mechanism of the surface and the deep ocean on multi-decadal time scales.

Our modeling shows that natural climate cycles explain at least part of the ocean warming we've seen since the 1950s.

"As a result, because as much as 50 percent of the warming since the 1970s could be attributed to stronger El Niño activity, it suggests that the climate system is only about half as sensitive to increasing CO2 as previously believed," Spencer said.

"Basically, previously it was believed that if we doubled the CO2 in the atmosphere, sea surface temperatures would warm about 2.5 C," Spencer said. That's 4.5° F. "But when we factor in the ENSO warming, we see only a 1.3 C (about 2.3° F) final total warming after the climate system has adjusted to having twice as much CO2."

It was previously known that Pacific Ocean warming and cooling events come and go in roughly 30-year periods of predominance, where El Niño warming events are stronger than La Niño cooling events for approximately 30 years, followed by roughly three decades where the reverse is true.

During the period of this study, cooling events were dominant from the 1950s into the late 1970s. That was followed by a period of strong El Niño warming activity that lasted into the early 2000s. The current phase has seen increased La Niña cooling activity.

Spencer said it is reasonable to suspect that the increased La Niña cooling might be largely responsible for an ongoing "pause" in global warming that has lasted more than a decade. If that is the case, weak warming might be expected to revive when this phase of the El Niño-La Niña cycle shifts back to a warmer El Niño period.

The study was the result of a debate over whether clouds can be part of an active forcing mechanism for global warming, or are just a passive response to temperature change.

"What we found is, to explain the satellite data we had to invoke a change in clouds nine months before the peak of either an El Niño or a La Niña," Spencer said. "When the clouds change, it takes time for that to translate into a temperature change.

Before an El Niño Pacific Ocean warming event, global cloud cover decreases, allowing more solar energy to reach the Earth's surface and be converted into heat. On the flip side, before a La Niña Pacific Ocean cooling event, cloud cover increases, shading more of the Earth's surface and reflecting an increased amount of solar energy back into space.

While changes in cloud cover intensify the warming or cooling of these ocean events, Spencer and Braswell still found that two-thirds of the sea surface temperature changes during both El Niño and La Niña events are driven by changes in ocean mixing. But the one-third forcing by clouds turns out to be an important component, substantially changing the interpretation of how sensitive the climate system is to CO2 emissions.