HUNTSVILLE, Ala. (June 24, 2013) - For the first time, blind and visually impaired mathematics students will be able to remotely communicate with their teachers in math's precise written symbolic language by using an easily accessible, accurate two-way system developed at The University of Alabama in Huntsville (UAH) in cooperation with gh LLC, an assistive technology corporation that focuses on making print accessible to the visually impaired and blind.

The new technology will debut in July at the National Federation of the Blind (NFB) Convention in Orlando, Fla.

If subsequent testing being done by the UAH researchers is successful, the new system will advance a long-range goal to transform how visually impaired students are taught science, technology, engineering and mathematics (STEM) via online teaching platform.

Dr. Derrick Smith, an assistant professor of education, and Dr. Erica Slate-Young, who is director of accreditation at the National Council for Accreditation of Teacher Education (NCATE) and a visiting assistant professor of education, have obtained a two-year, $300,000 grant from the National Science Foundation's Early Concept Grants for Exploratory Research (EAGER) program to prove the concept and study the impact on students who are provided a computerized means of interaction with teachers instead of traditional teaching methods for the visually impaired. 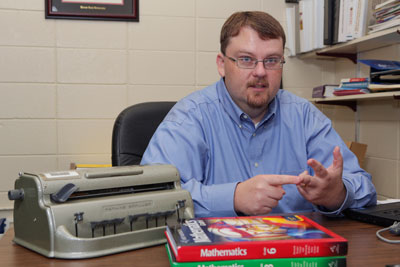 The University of Alabama in Huntsville (UAH) and gh LLC, an assistive technology corporation, have developed a system that for the first time allows blind and visually impaired students to communicate online with their teachers in math’s precise written symbolic language. Dr. Derrick Smith, co-principal investigator with Dr. Erica Slate-Young, explains the system. On his desk is a Perkins Brailler, used for typing in braille.

The new system debuts at the NFB Convention July 1-6, where about 5,000 attendees will have a chance to use it. It then will be tested this fall at schools for the blind in Alabama, Tennessee, Indiana, Washington and Maryland to identify accessibility issues and consider user improvements. Then in spring, it will be tested again to determine its impact on student comprehension.

The fall test module will assess the new system by having the students solve algebra equations with fractions. This was selected because spatial concepts such as fractions are challenging for visually impaired and blind students. The spring test format has not been chosen, but Dr. Smith said it is likely that it will involve solving quadratic equations. Students will complete math assessments to determine the impact on learning after completing the online math learning modules.

"Our goal is to make sure that the online learning environment is, number one, accessible to the students, and number two, that it is at least equal to the traditional classroom," Dr. Smith said. The primary objectives are to develop an online teaching platform that incorporates existing assistive technologies for students with visual impairments with open-source learning media software, and to shed light on how online technology with audio output and input can impact learning of mathematics for students with visual impairments in small-scale exploratory studies.

Before now, the only way a blind student could type math equations was to know how to program using special codes.

"We're actually developing this as a means for student to teacher communication online. What this project is doing is literally making a back-translator," said Dr. Smith, who was a math teacher at the Alabama School for the Blind before joining the UAH faculty. "Before now, the only way a blind student could type math equations was to know how to program using special codes."

Because the online system is being developed with government funding, Dr. Smith said it will be available to visually impaired students free.

"Right now for individuals who are blind, taking courses in math is not out of the question, but is limited," he said. Students use a screen reader and keys or buttons for multiple-choice questions. Equations are read to the student using Mathematical Markup Language (MathML) to describe the structure and content of equations. A computer braille display or auditory output (speech) allows visually impaired students to read the math information.

"But we have no mechanism for them to write mathematics and get that information back to the teacher," Dr. Smith said, noting the limitations of braille when it comes to the highly specialized symbols used in higher mathematics.

To facilitate student input, the new system employs the WAVE toolbar created by gh LLC so that keys on the keyboard can be used to write mathematical equations in print for sighted teachers. Simultaneously, the new system writes the student's equations in MathML that can read it aloud correctly for the student. Researchers have already gotten a glimpse of the possibilities for expanded future uses.

"What we are seeing in the field is that students who have print disabilities can use it to learn," Dr. Smith said. The system could also be used for students who are dyslexic or have other learning disabilities where they may better learn by having material provided in different formats, he said.

"Once the concept is proven," Dr. Smith said, "then we can go forward to voice recognition and more complex communication systems."