HUNTSVILLE, Ala. (November 21, 2011) - For decades, federal agencies at Redstone Arsenal - the U.S. Army's Aviation and Missile Command, Space and Missile Defense Command and NASA's Marshall Space Flight Center - have turned to The University of Alabama in Huntsville in the search for solutions to complex technical issues. 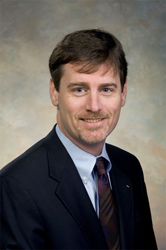 But Dr. John Horack, UAHuntsville's Vice President for Research, thinks there is an element they're missing.

He heads a research division considered one of the top one of the best among Southern universities. Fifteen UAHuntsville research centers have conducted nearly $200 million in funded research over the past five years.

The Department of Defense, he says, is "transforming in ways that aren't fully predictable," facing new threats in a highly charged political environment and constrained budget situation.

And while the military has always looked to America's universities for help in solving technological issues, Horack thinks they should also look for help with what he terms "the human terrain."

University faculty, he says, can take a fresh look at problems and issues, and bring insights and perspectives to problems facing America's military planners. "There is a need for improved socio-economic awareness. But there is no place to go on the GSA schedule to get this type of information."

The military, he says, have underutilized America's universities, failing to get from them vital information that could aid strategy and operations in missions around the globe.

"We're not using university muscle as well as we could," he says.

Horack says it's difficult for fielded systems to respond to threats as quickly as those threats change, but universities are well positioned to help meet those challenges. For example, universities can help the military understand how differing values among tribal peoples in distant theaters of war, like Afghanistan, can affect tactical strategies.

"Universities have a role to play because we have a breadth of expertise. This is especially true of people-related or socio-cultural problems," he said. "But in Huntsville we still have yet to realize the full extent of what the university can bring."

Horack points to a current project as an example of what he means. As the host partner on the Army's Joint Command Technology Demonstration Program, part of the Arctic Collaboration Environment (ACE), UAHuntsville is helping integrate sensing equipment in remote areas of the arctic. "We're gathering data on what is happening there, and looking for better ways to share this data with other nations."

That data, he explains, might be numbers of ships passing through polar waters, or migration patterns of polar bears.

In such a research situation, Horack says universities can be optimal places to host the research, as they are seen as "neutral ground."

"Our environment is made for these types of conversations," he says.

Universities, he says, can help the military solve highly complex projects of a systems engineering nature, but with that human element added. "We can help solve complex projects, develop 'what if' scenarios, and address the types of needs that may are important but which might not be immediate."

The academic world, he says, can help bring people together, to "have the right kinds of conversations." He touted the ability of academics to pull together teams of academic, military, and industry problem solvers. The more the problems are of a non-hardware nature, the more the academic community can bring to the table.

"We face challenges of sufficient difficulty and complexity that we can't approach them with half our collective brainpower tied behind our backs," he says.

He also suggested there are times the academic community can provide a fresh look, a critical eye, to existing engineering solutions.

Noting the high number of Huntsville government and technical personnel, Horack said people should take a look at their skill sets and consider increasing their education.

"There is a need for greater context and content," he says. "As our challenges become more complex we need to consider both computational and communication challenges."